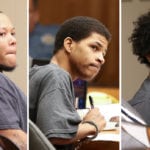 Close to 170 potential jurors flowed into the Douglas County District Courthouse Monday morning, kicking off the court’s largest jury selection operation in recent history, if ever.

The group will be carved down to a panel of 12 jurors to hear and decide the downtown Lawrence triple murder case, the city’s only triple murder in recent history, or at least 15 years, police have said.

One defendant is accused of all three killings, and his two co-defendants of lesser crimes, in connection with an Oct. 1, 2017, shooting that left three dead and two others injured at the intersection of 11th and Massachusetts streets.

The violent incident left chaos, panic and pools of blood on the pavement at bar-closing time on an extra-busy night in downtown Lawrence. Police estimate that possibly hundreds of people were in the area when the shooting happened, within hours of Late Night in the Phog at Allen Fieldhouse and a large concert at the Granada, 1020 Massachusetts St., with a guest appearance by rapper Lil Yachty.

Using a descriptor repeated by others, one downtown patron described the incident to the Journal-World afterward as seemingly “unreal.”

Those who died were 22-year-old Leah Brown, of Shawnee; 20-year-old Colwin Lynn Henderson, of Topeka; and 24-year-old Tre’Mel Dupree Dean-Rayton, of Topeka. The two men who were shot but survived also were from Topeka.

“We’re hopeful to try and find fair and impartial jurors,” District Attorney Charles Branson told potential jurors before launching into one round of questioning on Monday. “Part of that also is trying to find jurors that are appropriate for this particular case.”

By comparison, for the recent Motel 6 murder trial — which also had three defendants — about 140 potential jurors came in on the morning of trial. Two alternates were selected in that case.

The Massachusetts Street murder trial is scheduled to last two full weeks, but could take longer depending on legal issues that may arise and how long the jury takes to deliberate.

Already, prosecutors have said in pretrial hearings that they may have problems getting some of their witnesses to court, either because they can’t find them or they don’t want to testify. Also, the murder defendant’s attorney has requested a special immunity hearing within the trial to show evidence that her client acted in self-defense and to argue that his charges should be dismissed altogether.

Each of the three defendants has his own attorney. The initial shooting and ensuing court proceedings have been covered by local and regional media.

On Monday morning, seated alongside their attorneys at a table facing potential jurors, all three defendants wore purple or purple-patterned collared shirts. All remain in custody but are allowed to wear street clothes for their trial.

The three friends rode together to Lawrence on the night of the shootings and headed for Massachusetts Street, where some other people they knew were out, according to testimony from the preliminary hearing.

At about 1:40 a.m., a fistfight broke out between the defendants and other Topeka men they had bad blood with. A flurry of close to 20 gunshots followed, hitting five people around the intersection.

According to discussion at pretrial hearings, the jury selection process is anticipated to take at least two and a half days. A number of potential jurors were released Monday, and the remainder were instructed to return Tuesday to continue the selection process.

• 1:40 a.m. Sunday, Oct. 1, 2017, at the northwest corner of 11th and Massachusetts streets. A fistfight broke out between groups of Topeka residents with prior bad blood, followed by a flurry of close to 20 gunshots. It was bar-closing time on a busy night in downtown Lawrence.

• Leah Brown, 22, of Shawnee — Brown, a bystander, had come to Lawrence with a friend and just left Brothers Bar and Grill, 1105 Massachusetts St., when she was hit by gunfire. Brown worked in the child center at Life Time Fitness in Lenexa. After being home in Shawnee on medical leave, she had planned to return to Navy boot camp. Brown had been an athlete at Bishop Miege High School in Roeland Park, loved to roller skate and had her own motorcycle.

• Colwin Lynn Henderson III, 20, of Topeka — Henderson was a new father, with a 10-month-old baby girl he “adored,” according to his girlfriend.

• Tre’Mel Dupree Dean-Rayton, 24, of Topeka — Dean-Rayton, one of five siblings, was described as funny and easygoing. He was planning a move to California, where he didn’t have firm plans but wanted to do something different.

• Royelle Hunt and Tahzay Rayton, both of Topeka — Shot but survived. Rayton previously testified that he came to Lawrence that night with Dean-Rayton, his cousin.

• Robert Wheeler of Topeka — Allegedly the victim of aggravated assault and battery. Wheeler was friends with Henderson and Hunt. He also knew Rayton and Dean-Rayton, and greeted them outside after the concert.

• Sally Pokorny — a Douglas County District Court judge since 2009. This is the third murder trial Pokorny has presided over this year.

• Began with jury selection on Nov. 5. Scheduled to take at least two weeks.