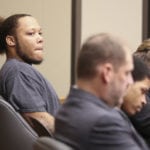 Defendant Anthony L. Roberts Jr., left, listens to questioning during a joint preliminary hearing, Thursday, Jan. 11, 2018, for himself and two other men charged in an October 2017 triple homicide on Massachusetts Street.

A 22-year-old Shawnee woman killed by gunfire leaving a downtown Lawrence bar last year was an actual victim, says the attorney for the man charged with murdering her and two other people.

But the two men who died that night and two more men who were shot but survived are in a different category, said Jennifer Chaffee, representing defendant Anthony L. Roberts Jr.

“Leah Brown is a victim in this case,” Chaffee said. “I don’t think that these other gentlemen are.”

Chaffee said she planned to employ a self-defense claim at Roberts’ trial — which is fast approaching, with jury selection set to begin Nov. 5 in Douglas County District Court.

Chaffee made her comments Friday among other discussion at a pretrial hearing. She didn’t elaborate on the reasons for that strategy.

However, when the trial was delayed in August, the Journal-World reported that new evidence had surfaced that could affect defense strategies, particularly for Roberts. Chaffee said then that she needed more time to sort through the new information — including having some reviewed by a “ballistics expert” — and determine how to proceed.

Roberts, 21, is one of three Topeka men going on trial together in connection with the incident, though he is the only one charged with murder.

A fistfight, then a flurry of close to 20 gunshots broke out at 11th and Massachusetts streets about 1:40 a.m. Oct. 1, 2017, as perhaps hundreds of bargoers were milling around outside at closing time.

A dispute between groups of men from Topeka preceded the shooting, according to testimony at the preliminary hearing. Public cameras captured the shooters — allegedly Roberts and his friends — firing from the northwest corner of the intersection before running back to the car they came in.

Brown was the only victim who didn’t know anyone else involved.

Also killed were 20-year-old Colwin Lynn Henderson and 24-year-old Tre’Mel Dupree Dean-Rayton, both of Topeka. The two other men who were shot also were from Topeka.

Ahmad M. Rayton, 23, is charged with two counts of attempted second-degree murder and one count of being a felon in possession of a firearm. Rayton, whose appointed attorney is Michael Clarke, is being held on $1 million bond.

Dominique J. McMillon, 20, is charged with aggravated assault, a felony, and misdemeanor battery, for allegedly hitting a man during a fight that preceded the shootings. Represented by appointed attorney J.C. Gilroy, McMillon is being held on $25,000 bond.

McMillon did not participate in Friday’s hearing because his attorney was experiencing a medical emergency.

Because it involves security, that motion is sealed and District Attorney Charles Branson told a reporter he would not disclose details about what’s in it.

The courtroom has been full for previous hearings in the case, with relatives and supporters of defendants and victims alike. Deputies have had to confiscate cell phones from the gallery, block attendees’ attempts to communicate with the defendants in the courtroom and, on Friday, even block two women who began yelling at each other, one accusing the other of “mugging” her.

• Pokorny ordered an assistant city attorney for Topeka to provide Chaffee with front pages of Topeka Police Department reports, which are public records, from a handful of shootings and homicides there.

Chaffee had sought to obtain investigatory files from the cases, which she said she needed for Roberts’ self-defense claim.

“What we’re concerned with is that Mr. Roberts has previously been a victim of the alleged victims in this case,” Chaffee said.

Luther Ganieany Jr., legal advisor for Topeka police, said Topeka had denied Chaffee’s initial request because all those cases were still open and under investigation, with no suspects arrested — “at least not yet.”

“There could be retaliation and concern for the safety of witnesses involved,” Ganieany said, adding that Roberts was only mentioned in one of them, in which he himself was shot and refused to give information to police.

• Pokorny agreed to admit photos of the five victims’ gunshot wounds at the trial.

Chaffee and Clarke argued that the photos were “gruesome,” unnecessary and would be unfair to their clients because they could inflame jurors’ emotions.

Branson said the photos he wanted to admit — about 20 of them, culled from more than 500 total photos taken at the crime scene and during autopsies — would show no faces and were needed to illustrate the wounds, including direction of travel of the bullets.

As far as homicide and shooting photos from her 40-plus years of practicing law, Pokorny said, “these are probably the least gruesome, most sterile photographs that I have ever seen.”

• Pokorny took under advisement Chaffee’s request for the state to prove Roberts’ police interview was voluntary. Pokorny said she planned to watch the entire 1 1/2-hour interview over the weekend before deciding whether to allow it to be shown at trial.

Lawrence police Detective M.T. Brown testified that when he interviewed Roberts on Oct. 18, 2017 — less than an hour after U.S. Marshals arrested him in a vehicle in Kansas City, Kan. — he did not appear to be under the influence of alcohol or drugs or to have any mental deficiencies.

Chaffee suggested that the interview was not voluntarily made, saying Roberts was under the influence when he was arrested and questioning M.T. Brown about whether he knew about Roberts’ education level or intellectual ability to understand the legal process.

Rebutting Chaffee’s last point, assistant district attorney David Melton asked the detective whether he had reason to believe Roberts didn’t understand what was going on.

“In fact, did he not lecture you on his Second Amendment rights?” Melton asked.