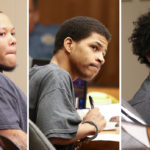 The footage is dark and the figures small, but public surveillance cameras and a police dashcam video captured October’s deadly shootings as they happened at 11th and Massachusetts streets.

More surveillance videos show three men police identified as suspects parking near the crime scene about 1:10 a.m. Oct. 1, then running back to the same dark SUV about 1:40 a.m., right after the shooting.

Those videos — along with up-close dashcam video of a traffic stop about 10 minutes after the shooting, where suspects in the case were searched, identified and ultimately released — were presented in court Thursday, during the preliminary hearing for three men charged in connection with the triple murder case.

Killed in the shootings were Leah Elizabeth Brown, 22, of Shawnee; Colwin Lynn Henderson, 20, of Topeka; and Tre’Mel Dupree Dean-Rayton, 24, also of Topeka. Two more Topeka men were shot but survived.

Thursday was the third day of a joint preliminary hearing for Roberts, Rayton and McMillon. When the hearing concludes after a fourth session Friday afternoon, Douglas County District Court Judge Sally Pokorny will rule whether there’s probable cause to order the defendants to stand trial.

About 30 people, including relatives and friends of both the defendants and the deceased, attended the hearing, fewer than were at previous hearings.

Lawrence Police Detective Dean Brown narrated a compilation of the video footage, including some enhanced still images and video “analyses” in which certain suspects and victims were circled in red to help them stand out in less-than-clear footage of the chaotic scene.

Defense attorneys repeatedly objected to the images — especially the enhanced ones — and to the detective describing them.

“He shouldn’t have an editorializing function,” said Jennifer Chaffee, Roberts’ attorney, adding that the detective should not be allowed to point out things including a crooked license plate on the suspect SUV, gun muzzle flashes during the shooting and distinctive clothing characteristics. “The video should speak for itself. If it’s not visible, it’s not visible.”

Judge Sally Pokorny overruled objections and allowed viewing and testimony to go on.

“It’s not like watching a movie,” Pokorny said of the images. “They’re dark, they’re grainy, some are far away, and any aid to the court is appreciated.”

Videos showed in court included a traffic camera at 11th and Massachusetts streets and public cameras at the nearby community center and Vermont Towers on West 11th Street. Dashcam videos included footage from a patrol vehicle parked at the Allen Press lot on Massachusetts Street, another that tried chasing the suspects right after the shooting and the vehicle conducting the traffic stop.

Videos show an SUV that police identified as the suspects’ black Kia Sportage, with a crooked license tag and defective taillight, pulling into a parking lot by Vermont Towers about 1:10 a.m. After the shooting, people can be seen running back toward the SUV before it leaves the lot.

Perhaps the most dramatic video — police dashcam footage from the Allen Press lot — shows dozens of people casually walking around the intersection. Then there are muzzle flashes and commotion from the corner in front of the Watkins Museum. Then crowds suddenly run in all directions away from the flashes, while a police officer runs in toward them.

The police officer, however, stops suddenly before he gets across the street, next to a bystander who didn’t run and appears to be gesturing toward the ground. The officer is seen stooping down, over what the detective indicated was the body of Leah Brown.

Some relatives of those killed in the shootings began to cry as the court played videos of their loved ones’ last moments, highlighting them in red circles.

The detective showed clear, color photos of each suspect and a friend they were with at the traffic stop, then compared them to still images of the men police believe are those same suspects at the crime scene and running away from it.

One photo from the traffic stop showed Rayton in a light-colored, long-sleeved shirt, dark pants and very light or white belt. The detective placed that next to a zoomed-in picture of a man police said appeared to be shooting at the crime scene then running away. The shirt of the man in that photo appears green, the color described by police officers who previously testified about what they saw.

When the detective showed clear images of Roberts from the traffic stop wearing what appears to be a blue T-shirt and tan pants next to still zoomed-in images of a man in similar clothing at the scene, Roberts leaned far back in his chair, tipped his head up and repeatedly shook his head.

The first two days of the preliminary hearing, on Jan. 11 and Jan. 19, revealed that a fistfight and the ensuing gunfire involved more than a dozen young men from Topeka who knew each other — and some of them had histories together stemming from past violence and social or family connections in Topeka.

According to previous testimony by several of those men and Lawrence police officers:

The three defendants and two other friends from Topeka drove to downtown Lawrence. Hanging out on the northwest corner of 11th and Massachusetts streets, outside the Watkins Museum of History, the group encountered a number of people they knew from Topeka.

An encounter between members of the two groups turned into a brawl, then close to 20 gunshots were fired.

Though some testimony was contradictory, witnesses’ statements indicated that all three defendants had guns and that at least two of them were shooting. The group ran to an SUV and headed back toward Topeka.

Two police officers stationed on foot across the street when the shooting happened tried to chase suspects but did not catch anyone at the scene. Police quickly turned their focus toward life-saving measures for the victims left bleeding on the pavement, though that was made difficult by large crowds — which some officers even described as hostile — refusing to follow orders to get out of the way.

Lawrence police stopped the three defendants for an invalid tag about 10 minutes after the shooting on West Sixth Street almost to Kansas Highway 10. After identifying and searching them but finding no “reasonable suspicion” to detain them, the officers gave Roberts back his gun and let them all go.

All the defendants and victims were connected in some way, either by acquaintance or blood, except for Brown. According to family and witness accounts, she was a bystander who was struck by a stray bullet.

The defendants were arrested in the weeks following the killings and stand charged with the following crimes:

• Ahmad Rayton is charged with one count of attempted second-degree murder for allegedly shooting Royelle Hunt. He’s also charged with being a felon in possession of a firearm.

He is jailed on $1 million bond, and his appointed attorney is Michael Clarke.

• McMillon is charged with one count of aggravated assault for allegedly threatening Wheeler with a gun, and one count of battery, also against Wheeler.

McMillon is being held on $25,000 bond. His appointed attorney is J.C. Gilroy.