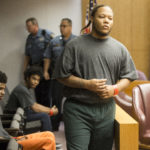 Defendant Anthony L. Roberts Jr. is called to appear before Douglas County District Court Judge Sally Pokorny on Wednesday, Oct. 25, 2017 in the Division Six courtroom. Roberts is accused of murdering three people in downtown Lawrence on Oct. 1. Two other defendants in the incident also appeared in the courtroom Wednesday — Dominique J. McMillon, seated in back, and Ahmad Rayton, seated in front.

The night he allegedly shot and killed three people on Massachusetts Street, Anthony L. Roberts Jr. came to Lawrence and left the scene of the crime with three other men from Topeka.

All three of those friends may now testify against Roberts at his upcoming trial.

Prosecutors have filed notice that they intend to subpoena Ahmad M. Rayton and Dominique McMillon, and Rayton has already been served with his subpoena, court documents show. The fourth man already testified, reluctantly, at a preliminary hearing.

Initially, Rayton and McMillon were co-defendants slated to face a jury alongside Roberts, in a joint trial. None could have been forced to testify at his own trial.

But their cases were split up after a mistrial during jury selection in November, and Rayton and McMillon — both charged with less severe crimes than Roberts — have since entered pleas and been sentenced separately.

The day after the last sentencing, prosecutors filed a motion for the court to endorse Rayton and McMillon as witnesses for Roberts’ murder trial. Court documents show Rayton was served with his subpoena the same day at the Douglas County Jail, where he’s awaiting transfer to prison.

It was about 1:40 a.m. — bar-closing time — on Oct. 1, 2017, when Roberts and his friends got into a confrontation with other Topeka men on the northwest corner of 11th and Massachusetts streets.

The victims who died were Leah Elizabeth Brown, 22, of Shawnee; Colwin Lynn Henderson III, 20, of Topeka; and Tre’Mel Dupree Dean-Rayton, 24, of Topeka. Royelle Hunt and Tahzay Rayton, both of Topeka, were shot but survived. Brown, who’d just left a nearby bar, was the only victim who knew no one involved.

Afterward, Roberts, Rayton, McMillon and the fourth man got into an SUV together and drove toward Topeka.

Testimony and police dashcam video played at the preliminary hearing showed that they were pulled over at the west edge of town, frisked and individually identified by police, though officers said they let them go at that time because they didn’t have “reasonable suspicion” to delay them further.

The fourth man — who wasn’t charged in the incident — said at the preliminary hearing that he was ordered to testify involuntarily and that he was afraid for his safety.

He told the court then that he met Roberts, Rayton and McMillon and another friend in Topeka earlier that night, and they took two cars to Lawrence.

The witness said that after shots rang out he ran to the SUV that the three defendants had driven to Lawrence. The defendants jumped in with him, and the group drove back toward Topeka.

The witness said he didn’t see anyone firing a gun. After being asked repeatedly by prosecutors, he admitted — with the utterance “mmm hmm” — he did previously tell detectives that he saw his friend Roberts shooting.

• Rayton, 23, was originally charged with three felonies from the incident but took a plea deal in April and was convicted of a single count of attempted voluntary manslaughter, for trying to kill a man he shot at but missed. On Wednesday Rayton was sentenced to 10 years in prison.

• In March, McMillon, 20, pleaded no contest to misdemeanor battery for hitting a man, sparking the fistfight that turned into shooting. McMillon was sentenced to six months in jail, a length of time he’d already served while awaiting trial in the case.

Douglas County District Attorney Charles Branson hadn’t previously answered whether he intended to call on Rayton or McMillon to testify against Roberts.

However, he did say that making plea deals with them enabled prosecutors to prioritize their case against Roberts.