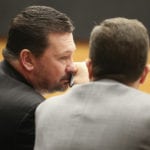 A murder defendant’s lawyer made fireworks in court recently by accusing the Douglas County District Attorney of misconduct and demanding him kicked off the case.

The presiding judge put closure to the matter this week, filing a formal order rejecting the lawyer’s request and explaining why.

DA Charles Branson and his team were “doing their due diligence on an important issue,” and there’s no basis for disqualifying them from trying the case, Douglas County District Court Judge Sally Pokorny wrote. “Ms. (Jennifer) Chaffee’s allegation that the prosecution is acting unethically by bringing forth the possibility of a conflict is totally misplaced.”

Topeka-based Chaffee represents 21-year-old Anthony L. Roberts Jr., of Topeka, who is charged with three counts of murder and one count of attempted murder in the Oct. 1, 2017, triple homicide on Massachusetts Street.

Roberts had been set to go on trial alongside two co-defendants beginning Nov. 5.

The attorney dispute arose during an Oct. 19 pre-trial hearing and came to a head at another hearing the following week.

On Oct. 19, prosecutors said that a Lawrence police detective had talked to a potential witness — an associate of Roberts — the night before. The woman said she wanted to talk to her attorney and made statements leading the detective to think she may have been calling and receiving legal advice from Roberts’ attorney, Chaffee.

Prosecutors brought the matter up in court, saying that if Chaffee also was representing a witness in the case, it could be a conflict of interest.

Chaffee said she was not the woman’s attorney then asked for the conversation to be moved into the judge’s chambers. No further action was taken in court, but the following week Chaffee filed a formal motion to disqualify Branson and Chief Assistant District Attorney David Melton from the case.

In a tense hearing that one co-defendant’s lawyer described as “cringeworthy,” Pokorny heard arguments from Chaffee and Branson on Nov. 1.

Pokorny said she needed to listen to the recording of the detective’s talk with the witness before making a final ruling. In the meantime, Branson and Melton stayed on the case.

In the order filed Tuesday, Pokorny said prosecutors had a duty to clarify the situation.

“During the interview the witness makes statements that legitimately raise questions as to whether or not she considers Ms. Chaffee to be her attorney,” Pokorny wrote. “The witness says, ‘I don’t want to disclose information told to me – I’ve talked to his attorney – I am going to call her – I should ask her – I don’t want to do anything to hurt his case – can I call my attorney…’ At this point, the witness leaves, is gone for several minutes and then reports, ‘She said you aren’t investigators.’ The implication is the witness was given advice not to talk to the detectives.”

When attorneys discussed the issue with the judge, there was some confusion but eventually Chaffee “emphatically denied” representing the witness or telling her not to talk to the police, Pokorny said. Pokorny said she accepted the answer as truthful and, at the end of that hearing, decided the issue had been properly brought to the attention of the court and clarified.

The judge did not change her mind after the ensuing written motion and arguments.

In the end, Roberts’ trial did not go on as planned this month, anyway. However, it has been rescheduled and Chaffee remains his attorney.

Four days into the jury selection process, on Nov. 8, the judge declared a mistrial and called off the proceedings for a legal reason that was not publicly explained.

The mistrial occurred while Roberts’ attorney was talking to potential jurors. At least one juror afterward described that portion as rocky, including misstatements by Chaffee and numerous objections by the DA that were sustained by the judge.

The next morning, Pokorny agreed to split up the three defendants and try them each separately instead. Their trials were rescheduled for early 2019.

Homicide victims in the case were Leah Elizabeth Brown, 22, of Shawnee; Colwin Lynn Henderson III, 20, of Topeka; and Tre’Mel Dupree Dean-Rayton, 24, of Topeka.