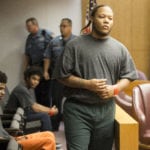 Defendant Anthony L. Roberts Jr. is called to appear before Douglas County District Court Judge Sally Pokorny on Wednesday, Oct. 25, 2017, in the Division Six courtroom. Roberts, who is accused of murdering three people in downtown Lawrence on Oct. 1, is charged with four felony counts in the case. Two other defendants in the incident also appeared in the courtroom Wednesday — Dominique J. McMillon, seated in back, and Ahmad Rayton, seated in front.

Anthony L. Roberts Jr. appeared in court Tuesday with two new lawyers who said they’re optimistic they’ll be ready for trial in two months, despite taking over his case late in the game.

Roberts, 21, of Topeka, faces three murder charges and one attempted murder charge in one of Lawrence’s highest-profile crimes in recent history — the slaying of three people and wounding of two others in a crowd on Massachusetts Street at bar-closing time.

His recent trial ended with a mistrial four days into jury selection. Douglas County District Court Judge Sally Pokorny found that misstatements and confrontational questioning from Roberts’ hired lawyer tainted the jury pool so badly that neither Roberts nor his two co-defendants could get a fair trial. Citing that and pretrial errors, Pokorny then discharged Topeka-based attorney Jennifer Chaffee, saying she was “incompetent to try this case.”

Moving forward, Pokorny appointed attorney Shaye Downing to represent Roberts, who is indigent. On Tuesday, the judge added a second attorney to work with her, Joshua Seiden.

Both Downing and Seiden are on the panel of attorneys preapproved to be appointed to felony cases in Douglas County, and they have handled multiple trials here.

Pokorny said she hoped they could be ready for trial on Feb. 4. She said families of those involved wanted closure and she thought Roberts, too, was ready to move forward.

“He’s been in jail for quite a long time now,” Pokorny said.

Downing said she intended to hire an investigator and a ballistics expert — steps Chaffee never followed through on — but was hopeful their work would be done in time for a Feb. 4 trial.

A hearing for Roberts to argue that he acted in self-defense, and thus should be immune from prosecution under Kansas’ “stand your ground” law, is still planned for January.

“We’re going to make every effort to keep the court’s date,” Downing said.

The shootings happened about 1:40 a.m. Oct. 1, 2017, at the intersection of 11th and Massachusetts streets. Groups of men from Topeka with prior bad relations encountered each other in the street, sparking first a fistfight, then a spray of around 20 gunshots.

Brown was the only victim who didn’t know anyone involved. She was just leaving a bar with a friend.

Two of the men who came to Lawrence with Roberts that night are charged with lesser crimes in the same incident.