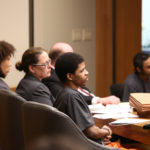 Calling the attorney “incompetent to try this case,” a judge has filed a scathing order barring a lawyer from representing the man accused of murdering three people on Massachusetts Street.

“Ms. Chaffee made a number of errors in the representation of her client that has caused this Court grave concern about her competency to proceed with this murder trial,” Pokorny said in her order.

Pokorny’s order discharging Chaffee was in response to a request by Chaffee for the opposite — to be appointed to continue representing her client, who wanted to retain her but could no longer afford to.

Chaffee made that request after the mistrial and asked for a second attorney to be appointed on the case as well. Besides finding Chaffee incompetent to continue with the case, Pokorny said that Chaffee was not on the panel of attorneys preapproved to be appointed to felony cases in Douglas County District Court.

Pokorny appointed a new attorney, Shaye Downing, to represent the defendant and said she intended to appoint a second attorney soon. Roberts’ trial is now set for Feb. 4.

Chaffee was hired by Topeka resident Anthony L. Roberts Jr., 21, and his family immediately after he was arrested in the case more than a year ago. Roberts is charged with three counts of murder and one count of attempted murder in the Oct. 1, 2017, shootings on Massachusetts Street.

Killed in the incident were Leah Elizabeth Brown, 22, of Shawnee; Colwin Lynn Henderson III, 20, of Topeka; and Tre’Mel Dupree Dean-Rayton, 24, of Topeka. Two more Topeka men were shot but survived.

On Nov. 5, the trial began for Roberts and two co-defendants who are charged with lesser crimes. An unprecedented number of potential jurors had been called in, extra security was in place and scores of witnesses were lined up.

But the trial never got past jury selection.

The judge declared a mistrial four days into the process. She found that Chaffee — through misstatements and “hostile and aggressive” questioning of potential jurors — had tainted the entire pool so much that neither Roberts nor his co-defendants could get a fair trial.

Reached Tuesday, Chaffee declined to comment for this story.

In a Journal-World article reporting why the trial was derailed, Chaffee said the mistrial could not be attributed to her. She said she was sorry her “methodology was not well received by the Court.”

That is not how the judge saw it.

In her order on Monday, Pokorny reiterated her position in even stronger terms.

When it was Chaffee’s turn to question jurors, she immediately misstated her client’s charges and had to be corrected, saying he was charged with six counts of first-degree murder.

Chaffee then told potential jurors that her client faced 75 years to life in prison. That misstatement came after Chaffee herself had objected to District Attorney Charles Branson addressing possible sentencing during his questioning earlier.

“Not only was that statement incorrect, she knowingly made comments about sentencing to the jury, having previously demonstrated her knowledge of the inappropriateness of the statement,” Pokorny wrote.

In addition to a juror approaching the bailiff to say she couldn’t be fair due to strong feelings of antipathy toward Chaffee, the other two defense attorneys complained about her alienating the whole group.

“Ms. Chaffee continued with her voir dire in a manner this Court describes as hostile and aggressive towards the panel,” Pokorny wrote.

Finally, Pokorny wrote, after she announced the mistrial and sent potential jurors home, court security heard more than one of them say on their way out that the attorney who’d just been questioning them, Chaffee, was “crazy.”

Among the judge’s other concerns about Chaffee, listed in Monday’s order:

• Just two weeks before the trial, Chaffee filed a motion saying her client’s charges should be dismissed because he acted in self-defense, and asking for a hearing to put on evidence to prove it.

That request came in three months after the deadline for filing motions and while Chaffee knew the judge was on vacation, leaving just days to resolve the matter before trial.

“It is very concerning to the Court that the motion for self-defense immunity was not raised much earlier in this case,” Pokorny wrote. “The preliminary hearing took place over three days. Based upon the testimony at the preliminary hearing, a mere observer could speculate that one or more defendants might rely upon self-defense, yet no motion was filed for eight months.”

• Around the beginning of April, Pokorny found Roberts to be partially indigent, enabling Chaffee to use public money to hire experts for her case — but she apparently never followed through.

“Ms. Chaffee had raised the need to find an expert in the field of firearm and projectile identification. Thereafter, there was not one request for this Court to sign an order allocating money to hire any experts for consultation or for use at trial.”

• The issue of whether Roberts’ videotaped interview with police should be admitted at trial came up in multiple pretrial hearings. Chaffee showed up unprepared to argue the issue and, ultimately, filed her request to have part of it redacted two business days before the trial.

• Appointed attorneys for Roberts’ two co-defendants asked before the trial to have it severed, citing concerns that Chaffee would reflect poorly on them and their clients in front of a jury. In particular, the attorneys cited Chaffee’s behavior in a heated and “cringeworthy” hearing where she asked the judge to disqualify DA Branson and his team, which the judge did not do.

The morning after the mistrial, Pokorny agreed to split up the three defendants in the Massachusetts Street case.

In addition to rescheduling Roberts’ trial, she scheduled separate trials for his two co-defendants.