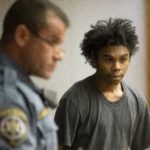 One of three Topeka men charged in connection with a triple homicide and fight in downtown Lawrence walked free from Douglas County District Court on Tuesday.

Dominique J. McMillon, 20, pleaded no contest to a single count of misdemeanor battery and was sentenced to less time than he’s already served in jail for the case, his appointed attorney, J.C. Gilroy, said.

“Mr. McMillon is pleased with the outcome,” Gilroy said.

McMillon is the man who started a fistfight that escalated into gunfire, which killed three people and wounded two others at the corner of 11th and Massachusetts streets at bar-closing time on Oct. 1, 2017.

“By entering his plea McMillon acknowledges his role in starting the fight,” Douglas County District Attorney Charles Branson said, in a news release. “Resolving this case allows the State to concentrate on the two remaining and more serious cases.”

McMillon’s charges were significantly less severe than his two co-defendants’, one of whom is charged with three murders and the other with two attempted murders.

In addition to the battery charge for hitting a man before the shootings, McMillon initially was charged with one count of aggravated assault, a felony, for allegedly threatening the same man with a gun.

McMillon’s felony charge was dropped in exchange for his plea, Gilroy said.

McMillon’s March 18 jury trial has been called off.

It’s unclear whether he will testify against his friends at their upcoming trials.

However, his plea deal with prosecutors doesn’t include any requirement to do so, Gilroy said.

The DA’s office did not respond Tuesday to whether prosecutors plan to call McMillon to testify.

McMillon and the other two men began trial as a group in November. But after declaring a mistrial before a jury was selected, Judge Sally Pokorny split up the three trials.

At that time McMillon already had been in jail potentially longer than he would be imprisoned if convicted of all his original charges, Gilroy and prosecutors said.

McMillon remained in custody on $25,000 bond. He was later granted a $50,000 personal recognizance bond and bailed out of jail in late January, according to court records.

McMillon listed a Topeka address, and while on bond was ordered to have no contact with any victims or witnesses in the case, and to have no guns, drugs or alcohol.

For McMillon’s battery conviction, Pokorny sentenced him to 180 days in jail, Branson said in the news release. McMillon had already spent 463 days in custody.

Lawrence’s only triple homicide in recent memory happened after groups of men from Topeka with prior bad relations encountered each other in the street. The fistfight broke out, then a spray of around 20 gunshots.

Brown was the only victim who didn’t know anyone involved. She had just left a bar with a friend.

Ahmad M. Rayton, 23, faces two counts of attempted second-degree murder and one count of being a felon in possession of a firearm. Rayton is scheduled to go on trial April 8.

Roberts and Rayton each remain jailed on $1 million bond.