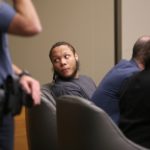 Seated next to his appointed attorneys, Anthony L. Roberts Jr. looks back at relatives in the gallery during a hearing on Friday, Jan. 11, 2019, in Douglas County District Court.

A man accused of fatally shooting three people and injuring a fourth in downtown Lawrence asked a judge to find that he acted legally in self-defense, and drop his charges.

The judge rejected that request Friday.

Roberts’ self-defense immunity request was filed last fall by his original attorney, who ended up removed from his case after causing a mistrial in November. The trial against Roberts and two co-defendants was underway when Jennifer Chaffee’s comments and questions during jury selection tainted the jury pool beyond repair, Douglas County District Court Judge Sally Pokorny found.

At Friday’s hearing on the immunity request, Roberts’ new attorneys chose not to call witnesses or put on additional evidence to argue that Roberts acted in self-defense.

Saying they didn’t have anything specific to respond to, prosecutors didn’t call witnesses either.

So, Pokorny based her decision on three days’ worth of testimony and cross-examination she heard at Roberts’ preliminary hearing last year. The judge said she’d re-reviewed the transcript in light of Roberts’ self-defense immunity request but that there wasn’t evidence to support that argument.

“I could not find it,” Pokorny said.

Deputy District Attorney David Melton said defense attorneys and witnesses adequately explored relevant issues at the preliminary hearing — including whether any of the victims or their associates had guns, and who started the dispute that preceded the shooting.

Based on that information, Melton said Roberts “did not act reasonably in using deadly force.”

Roberts’ new attorneys, Shaye Downing and Joshua Seiden, both appointed after Chaffee’s removal, said they could address self-defense issues during his trial instead.

As for their specific defense strategy, Seiden said that’s to be determined.

Prior to the trial that was called off, Roberts’ first attorney said she planned to employ a self-defense claim at trial, asserting that most of the five people killed or injured shouldn’t be called victims.

About 1:40 a.m. on Oct. 1, 2017, groups of Topeka men with prior bad blood came together at the corner of 11th and Massachusetts streets. A fistfight ensued, then gunfire.

It was bar-closing time on a busy night in downtown Lawrence, and the barrage of close to 20 gunshots hit five people.

Brown, who had just left a bar with a friend, was the only victim who didn’t know anyone involved.

Roberts was set to go on trial with his two co-defendants, but after November’s mistrial the judge split up their cases.

Ahmad M. Rayton, 23, of Topeka, is charged with two counts of attempted second-degree murder and one count of being a felon in possession of a firearm. Rayton is scheduled to go on trial April 8.

Earlier this week, McMillon, 20, of Topeka, pleaded no contest to a single count of misdemeanor battery and was sentenced to less time than he’d already served in jail in the case. Initially, he’d also been charged with aggravated assault, a felony.

Roberts and Rayton each remain jailed on $1 million bond.