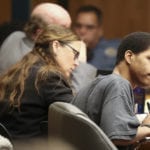 Defendant Ahmad M. Rayton, right, listens to questioning during a joint preliminary hearing, Thursday, Jan. 11, 2018, for himself and two other men charged in an October 2017 triple homicide on Massachusetts Street.

The second of three co-defendants in the Massachusetts Street triple murder case has been convicted, after entering a plea Wednesday in Douglas County District Court.

Ahmad M. Rayton, 23, of Topeka, pleaded guilty to one count of attempted voluntary manslaughter, a felony, for shooting at a man during the deadly fracas in downtown Lawrence. In exchange for his plea, other charges against Rayton will be dismissed.

Judge Sally Pokorny scheduled Rayton’s sentencing for May 8, and revoked his bond. She said he will be required to register as a violent offender for 15 years.

He faces up to 136 months, or over 11 years, in prison, depending on his criminal history, according to a news release from the Douglas County District Attorney’s Office.

Rayton, in jail garb with ankle and wrist shackles, did not speak besides answering yes and no questions from the judge about whether he understood the proceedings.

Previously, Rayton had been charged with two counts of attempted second-degree murder — for trying to shoot Robert Wheeler, whom he missed, and shooting Royelle Hunt, whom he allegedly hit in the leg — as well as being a felon in possession of a firearm.

Rayton’s trial, which had been set to begin Monday, will not go forward.

DA Charles Branson said after Wednesday’s hearing that plea deals convicting two co-defendants will enable his office to prioritize its case against the remaining defendant charged with the most serious offenses, including all three homicides.

“This clears the deck for us to be able to concentrate on Anthony Roberts’ trial,” Branson said.

Branson declined to answer additional questions about the case, including whether his office planned to call on Rayton and the third co-defendant, Dominique J. McMillon, 20, of Topeka, to testify against Roberts.

The three were friends who drove to and from Lawrence together on the night of the shootings, according to evidence at the men’s joint preliminary hearing last year.

About 1:40 a.m. Oct. 1, 2017, at the corner of 11th and Massachusetts streets, a fistfight between the defendants and other Topeka men escalated into gunfire. A spray of around 20 gunshots killed three people and wounded two others around the intersection.

The victims who died were Leah Elizabeth Brown, 22, of Shawnee; Colwin Lynn Henderson III, 20, of Topeka; and Tre’Mel Dupree Dean-Rayton, 24, of Topeka. Hunt and another Topeka man, Tahzay Rayton, were shot but survived.

Brown was the only victim who didn’t know anyone involved. The shooting happened at bar-closing time, and she had just left a nearby establishment with a friend.

In March, McMillon pleaded no contest to a single count of misdemeanor battery for starting the fistfight by hitting Wheeler.

McMillon was sentenced to 180 days in jail, but since he’d already been jailed longer than that while awaiting trial, he did not have to go back. With his plea, McMillon’s trial also was canceled.

Originally, all three defendants were slated to go on trial together, and their joint trial did get underway in November. However, Roberts’ first attorney caused a mistrial during jury selection — by comments and questioning that the judge ruled had tainted the entire jury pool — and afterward Pokorny agreed to separate the three men’s cases.

Ahmad Rayton’s appointed attorney, Michael Clarke, declined to make additional statements following Wednesday’s plea hearing. The mother of Brown, Gretchen Brown of Shawnee, attended the hearing but declined to comment on the development for this article.