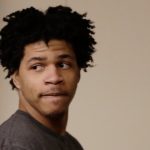 Ahmad M. Rayton exits the Douglas County Division II courtroom, Wednesday, May 8, 2019, after he was sentenced to 10 years in prison for his role in the deadly 2017 shootings on Massachusetts Street.

A Topeka man was sentenced to 10 years in prison Wednesday for his role in the 2017 shootings on Massachusetts Street that killed three people and wounded two others.

Ahmad M. Rayton, 23, was originally charged with three felonies from the incident: two counts of attempted second-degree murder — for allegedly shooting one man and trying to shoot another — as well as being a felon in possession of a firearm.

In April, Rayton took a plea deal and was convicted instead of a single count of attempted voluntary manslaughter, a felony, for shooting at the man he missed, Robert Wheeler.

Douglas County District Court Judge Sally Pokorny sentenced Rayton to 120 months in prison, though she said about a year and a half will be taken off for the 568 days he’s already spent in jail since his arrest. Rayton’s prison stay will be followed by two years of supervised release. He also will be required to register as a violent offender for 15 years.

Rayton is the second defendant in the high-profile case to be convicted with a plea instead of going to trial. 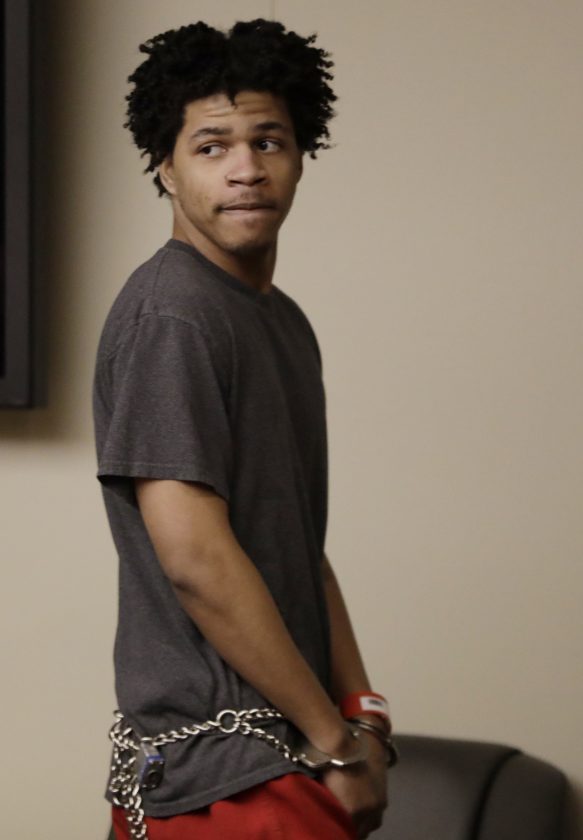 Ahmad M. Rayton exits the Douglas County Division II courtroom, Wednesday, May 8, 2019, after he was sentenced to 10 years in prison for his role in the deadly 2017 shootings on Massachusetts Street.

In March, Dominique J. McMillon, 20, of Topeka, pleaded no contest to misdemeanor battery for hitting Wheeler, sparking the fistfight that turned into shooting. McMillon was sentenced to six months in jail, a length of time he’d already served while awaiting trial in the case.

Those deals enabled prosecutors to prioritize their case against the last defendant — who’s charged with the most serious crimes, including all three homicides — Douglas County District Attorney Charles Branson has said.

The three friends drove to Lawrence together on the night of the shootings, according to evidence at the men’s joint preliminary hearing last year.

It was about 1:40 a.m. — bar-closing time — on Oct. 1, 2017, when the defendants got into a confrontation with other Topeka men on the northwest corner of 11th and Massachusetts streets.

The victims who died were Leah Elizabeth Brown, 22, of Shawnee; Colwin Lynn Henderson III, 20, of Topeka; and Tre’Mel Dupree Dean-Rayton, 24, of Topeka. Royelle Hunt and Tahzay Rayton, both of Topeka, were shot but survived.

Brown, who’d just left a nearby bar, was the only victim who didn’t know anyone else involved.

All three defendants did go on trial as a group in November — almost.

The judge declared a mistrial four days into the jury selection process. Roberts’ first attorney, whom he hired himself, made comments and asked questions that tainted the entire jury pool, Pokorny ruled.

Ahmad Rayton’s sentence is the standard under state sentencing guidelines for the severity of his conviction and someone with his criminal history, Pokorny said. He has a prior felony conviction in Kansas, for a 2014 aggravated assault in Shawnee County, according to Kansas Department of Corrections records.

Other than the DA recommending the 120-month sentence, no one but the judge spoke during Rayton’s sentencing hearing.

When invited to make a statement, Brown’s mother, Gretchen Brown, who was seated in the courtroom with several other relatives, shook her head no and reached for tissues.

Rayton declined, as did his appointed attorney Michael Clarke.

After the hearing, a number of Rayton’s supporters who had been in the courtroom — including his co-defendant McMillon — declined offers to comment to a reporter.

The judge did make a statement directed at the victims’ families, saying she understood the circumstances were difficult for them.

“There will never be any closure here,” Pokorny said. “This is not a case — even where there’s a plea and sentencing — where this pain will ever end.”