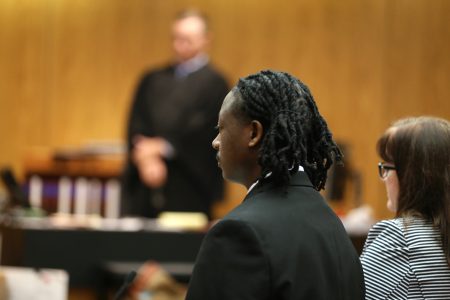 A detective who analyzed phone records in a Lawrence murder case found three key points in the data, which he shared with a jury in Douglas County District Court Monday.

Secondly, the victim’s phone was last used at 4:22 p.m. on the day she’s believed to have died.

Slifer testified Monday during the trial of Rontarus Washington Jr., 23, who is charged with first-degree murder and aggravated burglary in connection with the death of 19-year-old Justina Altamirano Mosso. Washington has been in custody nearly four years and nine months as his trial has been delayed multiple times.

Washington’s defense team, attorneys Angela Keck and Adam Hall, have focused largely on Felipe Cantu Ruiz, Mosso’s now-31-year-old husband, who has testified that their relationship was not good and that she had cheated on him multiple times, as a possible alternative perpetrator for Mosso’s murder. She was found bludgeoned and stabbed to death on Sunday, Nov. 9, 2014, in the bathroom of the apartment the couple had shared at 1727 W. 24th St., Lawrence’s Cedarwood Apartments.

Cantu Ruiz has testified that he decided to move to Manhattan the morning of Friday, Nov. 7, 2014, and that he left later that afternoon after saying goodbye to Mosso in the Cedarwood parking lot. Records from his phone corroborate that he did leave town, Slifer said Monday, and that he likely reached a rest area west of Topeka and 57 miles away before 5 p.m. that day. Investigators believed she died sometime after 4:22 p.m., when her phone was last used to search for a song online.

Slifer walked jurors through a PowerPoint presentation of the phone records from data he collected from Sprint and from “dumps” of Cantu Ruiz’s and Mosso’s cellphone contents. The data indicates that Mosso tried to call Cantu Ruiz and Juan Pacheco, the friend who drove him, several times that afternoon. From around 4 p.m. on, Cantu Ruiz’s phone was likely traveling westbound on Interstate 70. 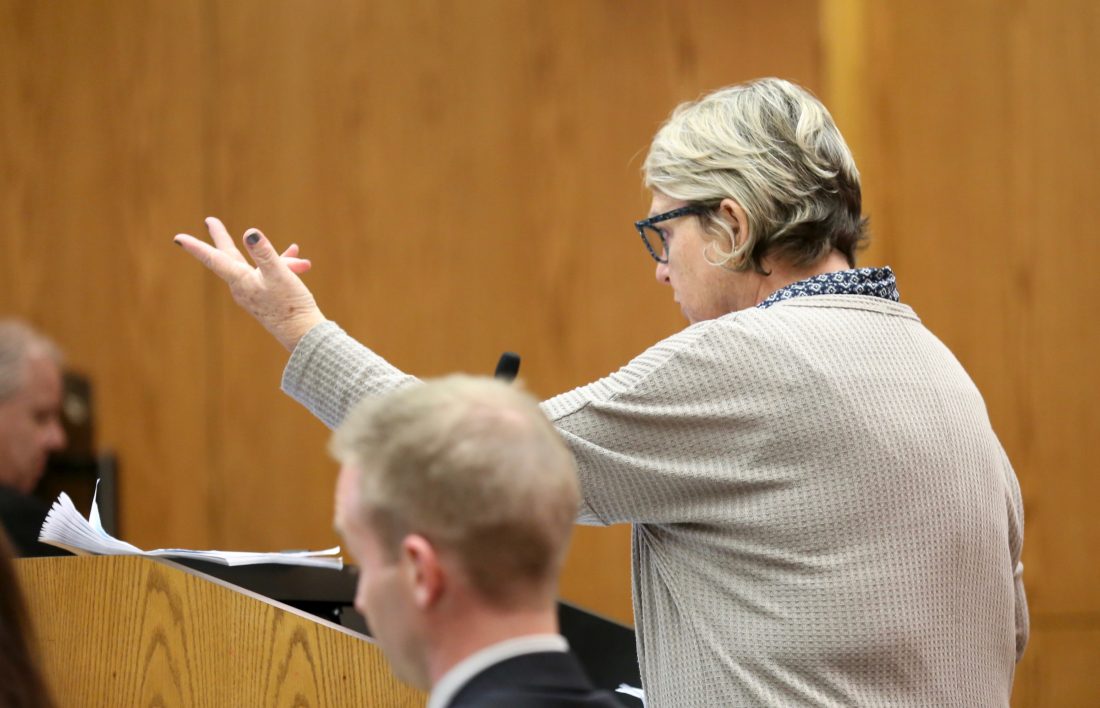 Mosso had a few phone conversations with her friend, Blanca Estela Galeana Aviles, for about five minutes, then 10 minutes at 3:42 and 3:51 p.m. She tried to call Cantu Ruiz and Pacheco a few times. She didn’t have the correct number for Pacheco, and records indicate that she also tried to call him via the Facebook app around 4:08 p.m., Slifer said.

Pacheco has previously testified that he didn’t know Mosso or her phone number. He said the first time he saw her was when he was leaving for Manhattan with Cantu Ruiz on the day of Mosso’s death.

On cross-examination by Hall, Slifer said two calls from Mosso to Cantu Ruiz that appeared to be answered were likely actually voicemails. He did not have any record of the voicemails, though, and Cantu Ruiz has testified that the last time he heard Mosso’s voice was in the parking lot before he left Lawrence.

Mosso then tried to call her mother in Mexico four times, the last time at 4:18 p.m. Other than a web search, her phone registered no further outgoing activity, Slifer said.

Mosso’s phone stopped registering any incoming calls, texts or Facebook messages around 1:40 a.m. Saturday, Nov. 8. It’s not clear whether it ran out of battery or was shut off. When police recovered the damp phone from the rooftop of the apartment building a few weeks later, neither the phone nor the two socks in which it was wrapped bore any usable DNA or fingerprints.

The phone Washington was using belonged to someone else. It’s not been made clear to the jury how it ended up in Washington’s possession, but according to documents in the case file, he stole it from a woman a couple of weeks prior to Mosso’s death. Slifer said the phone was very basic, used just for calls and texts. It did not have data.

Washington made and received several calls that afternoon, all likely originating from around the same area in Lawrence, but Slifer said there was a gap in phone calls between 4:08 p.m. and 4:41 p.m. That would be from 14 minutes before Mosso’s phone’s last use until 19 minutes after.

Once C.J. Rieg, senior assistant to the Douglas County district attorney, said Monday afternoon that she intended to rest her case, Keck made a motion for Washington’s acquittal. She said the state had not presented sufficient evidence to prove the identity of the killer or that the murder was premeditated, regarding the first-degree murder charge against Washington. 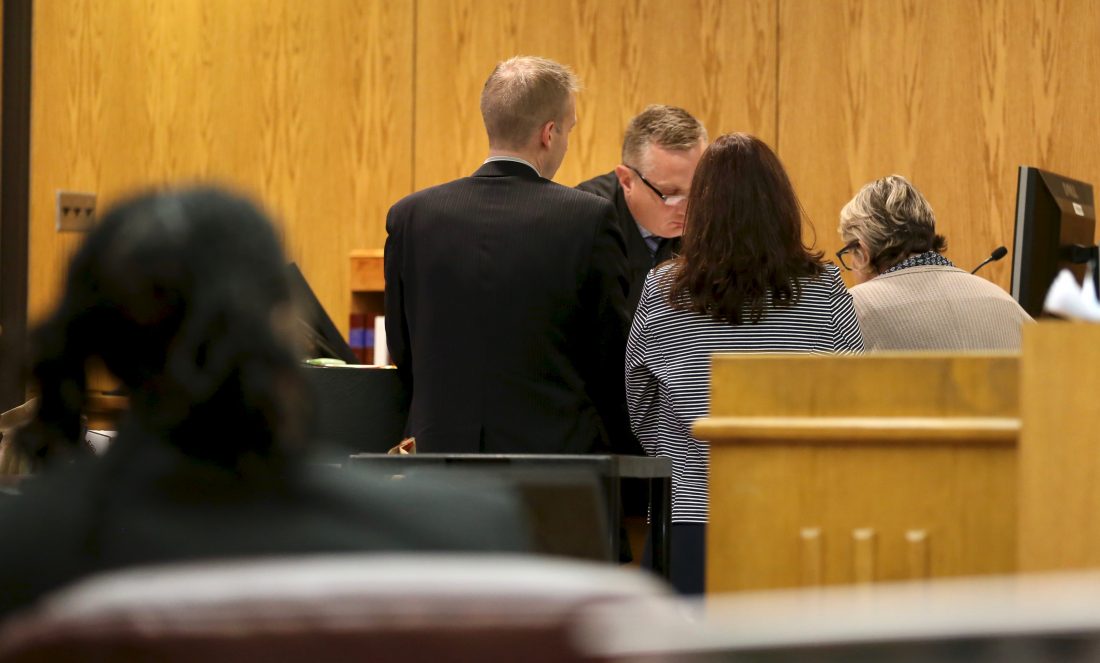 Additionally, Keck said that in a statement Washington had given police, he did not say that he entered the apartment while the victim was alive intending to take change, or that he looked through the dresser drawers; therefore the state did not prove the charges of aggravated burglary or the alternative charge of first-degree felony murder — a murder taking place during the commission of a dangerous felony.

In a redacted video version of his interview with police, Washington told them he had entered the apartment and saw Mosso dead or dying in the bathroom. The crime of aggravated burglary requires that a living person be inside the dwelling.

Rieg argued that premeditation does not require sitting down at a table to plan a murder; it can be formed in a very short time. She alleged that the defendant used “two instruments” — a toilet tank lid and some sort of sharp object — to murder Mosso. Rieg said Washington also told police he went into the apartment to look for change; Keck said that was a mischaracterization of the evidence.

Douglas County District Court Judge James McCabria denied the motion. He ruled that the violent nature of the murder and two weapons used provided circumstantial evidence of premeditation, and “in a light most favorable to the state,” the defendant’s purpose for entering the apartment was that he intended to commit theft. McCabria said he thought Washington had indicated in his statement to police that he felt bad that he didn’t do anything when he saw Mosso expiring in the apartment, thus there was a person alive inside.

A couple of witnesses for the defense came to testify Monday afternoon. One was Joshua Brown, the uncle of Washington’s girlfriend who had been referenced in case documents as “Uncle Jot.” 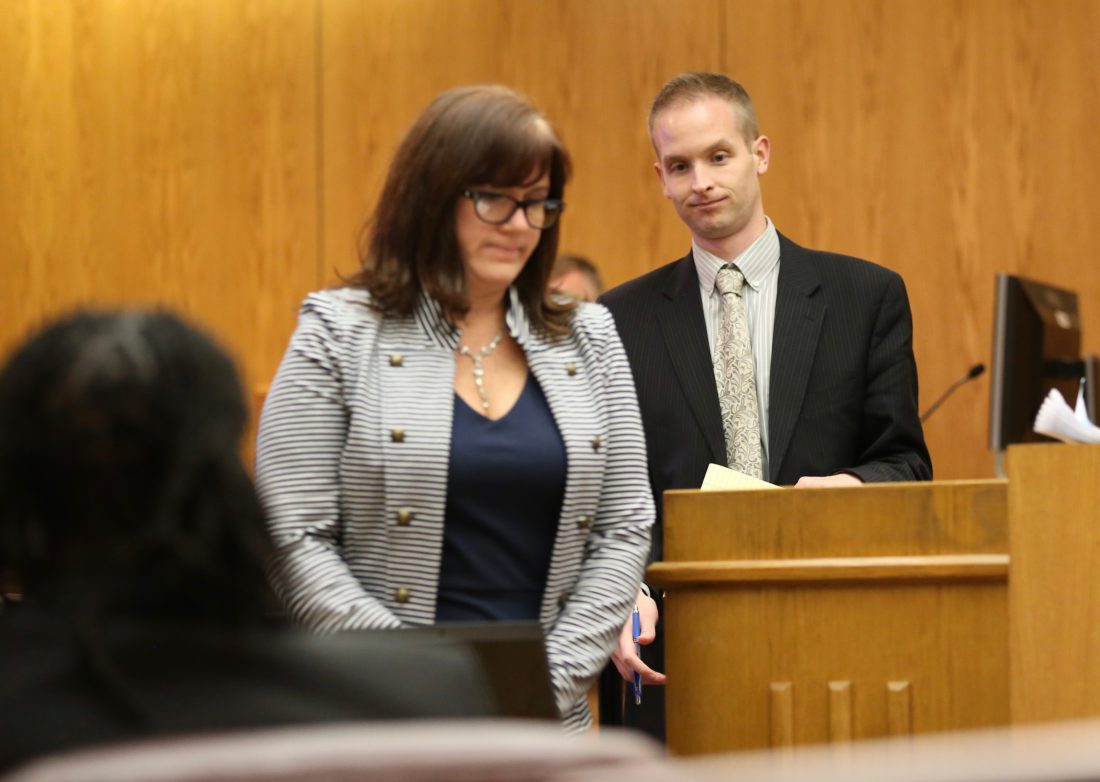 From right, defense attorneys Adam Hall and Angela Keck walk back toward their table to sit with their client, Rontarus Washington Jr., during trial for Washington on Monday, Sept. 30, 2019 in Douglas County District Court.

“Uncle Jock,” as the nickname was clarified in court Monday, said in his testimony that Washington, whom he knew as Junior, had called him and asked him to come pick him up because he was bored. Brown said he didn’t remember the date, but previous testimony in the case places it as that Friday, Nov. 7, 2014, and phone records place the call at 4:58 p.m.

Brown said when he went to pick Washington up that day, he came out to the car, then ran back upstairs to make sure he’d locked his apartment. In his statement to police, Washington said that was when he noticed the door to Mosso’s apartment on the opposite side of the third floor was open and he had walked in.

Brown said Washington was not acting strangely, and Brown did not recall seeing any blood on his clothes or shoes. Washington had no knife or purse — he was just carrying the bookbag he always carried, containing his gaming system. Mosso was believed to be carrying a mint-colored purse on the day of her death. Investigators say they’ve never found the purse.

The trial will resume Tuesday morning. It was scheduled to run from Monday, Sept. 9 through Friday, Sept. 27, but more time was necessary to question all of the state’s witnesses. The defense has brought in a few witnesses, as well.