Expert: Partial DNA on Lawrence murder victim’s nail could link to 1 in 2,000 men 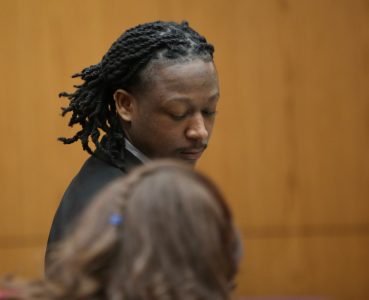 Rontarus Washington Jr. glances down at the table as he waits for the jury to enter during trial on Thursday, Sept. 26, 2019 in Douglas County District Court.

Jurors in a Lawrence murder trial on Thursday heard about the partial DNA evidence that prosecutors say links 23-year-old Rontarus Washington Jr. to the crime.

However, they also heard that this particular bit of partial DNA could be found in a frequency of roughly 1 in 2,000 men in the general population, plus any of Washington’s paternal male relatives.

Experts testified about the forensic evidence in the case, including blood and hairs found around the crime scene — apartment No. 13 at Lawrence’s Cedarwood Apartments, 1727 W. 24th St. — and on some items from Washington’s apartment on the opposite side of the building’s third floor, No. 10.

Justina Altamirano Mosso, 19, was found bludgeoned and stabbed to death in the bathroom of apartment No. 13 on Sunday, Nov. 9, 2014, but authorities believed she died two days prior on Friday, Nov. 7, 2014. Washington is charged with first-degree murder and aggravated burglary in connection with her death, and he has been in custody for about four years and eight months as his trial has been repeatedly delayed.

The defense has focused largely on Mosso’s husband, Felipe Cantu Ruiz, as a possible alternative perpetrator. He has testified that their relationship was not good, and he alleged that Mosso cheated on him multiple times. She had moved out of No. 13 a few weeks prior to her death, and Cantu Ruiz had left town to move to Manhattan on the day she died.

In a video of an interview with police on Nov. 24, 2014, shown to the jury Wednesday, Washington revealed that he had entered apartment 13 and found Mosso with blood still pooling around her. He said he turned and ran, but that wasn’t before he left some evidence that he’d been there.

Lawrence Police Detective Jamie Lawson said Thursday that Washington had moved from a witness to a suspect in the case once police believed they had ruled out Cantu Ruiz, based on evidence the jury has not yet heard, and once Washington stated he’d been inside No. 13.

Lawson said then there was a “continuous evolution” of Washington’s story, and “that was something we couldn’t ignore.”

When Mosso’s body was found inside the bloody bathroom, detectives and the coroner collected hairs and fingernail clippings from her left and right hands. Shortly thereafter, they collected other evidence, including pieces of the broken toilet tank lid that was likely used to bash Mosso over the head twice.

Lance Antle, a forensic biologist for the Kansas Bureau of Investigation, testified about the DNA testing he’d performed in the case, including on the fingernail clippings and some blood stains in the bathroom and on other items. 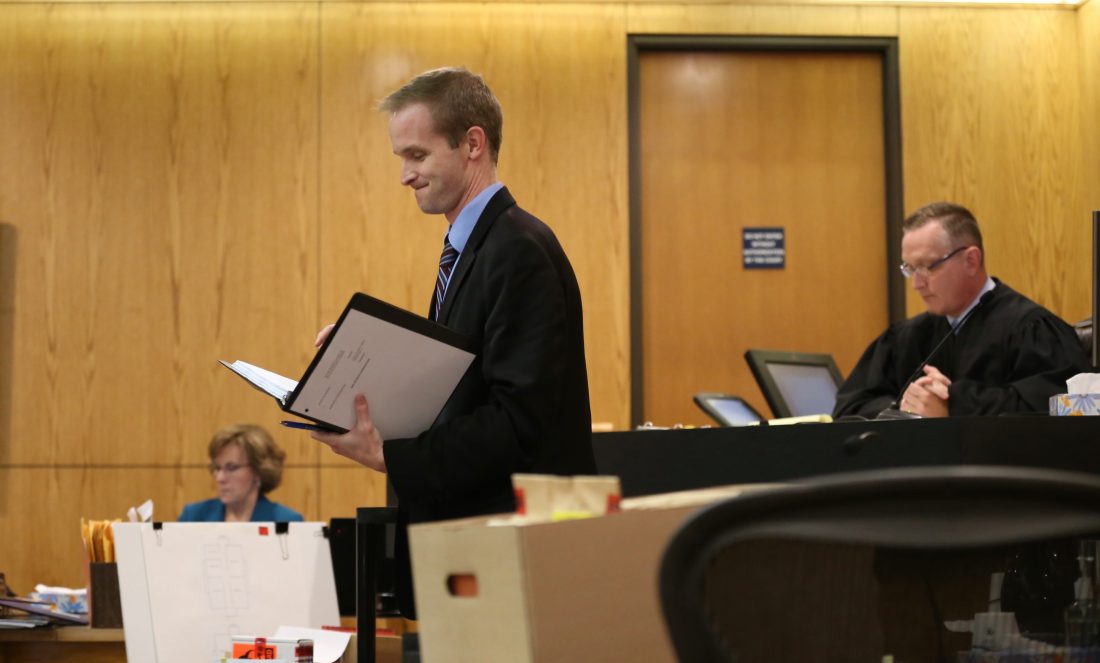 Defense attorney Adam Hall walks away from the bench between stacks and boxes of evidence following a discussion with Douglas County District Court Judge James McCabria, pictured at right, during trial for Rontarus Washington Jr. on Thursday, Sept. 26, 2019.

Most of the blood stains were complete matches to Mosso’s DNA. Others were complete or partial matches to Cantu Ruiz. A bloodstain on the jeans Cantu Ruiz was wearing when police interviewed him Nov. 9, 2014 was matched to him, and Antle said the estimated frequency of that DNA was as slim as 1 in multiple septillions.

Some other tests revealed a mixture of DNA. One bloodstain on the doorframe of the bathroom was a likely match to Cantu Ruiz. A swab from one piece of the broken toilet tank lid was likely a match to an unknown male, but the DNA was not sufficient to submit to a national database to try to find a match.

Investigators had found Mosso’s cellphone on the roof of the apartment building, wrapped first in a white ankle sock and then in a black dress sock. Neither sock contained sufficient DNA to produce a sample or compare to others.

Antle said he tested one fingernail clipping each from Mosso’s left and right hands. The clippings revealed a great majority of her own female DNA, and his initial testing did not indicate the presence of DNA from anyone else. On the right hand clipping, he performed a different test and found partial DNA from at least three males.

The primary partial DNA haplotype from that nail could not rule out Washington, nor any of his male paternal relatives, Antle said. The probability of selecting an unrelated male from the general population who would produce the same partial haplotype would be about 1 in 2,000.

Based on that frequency and data from the U.S. Census, that could be roughly 24 people within the city of Lawrence. Antle said the discriminatory power of this type of testing is far less than that of “autosomal” DNA, of which the frequencies can be 1 in septillions.

In response to cross-examination from defense attorney Adam Hall, Antle said he could have individually swabbed the top, tip and underside of the nail clippings, but he did not, and he didn’t know where the male DNA had been located on the nail. He also said the lab does not test unknowns against unknowns, so for instance he had not tested the unknown male DNA from the toilet tank lid fragment against the unknown male DNA on Mosso’s nail clipping. 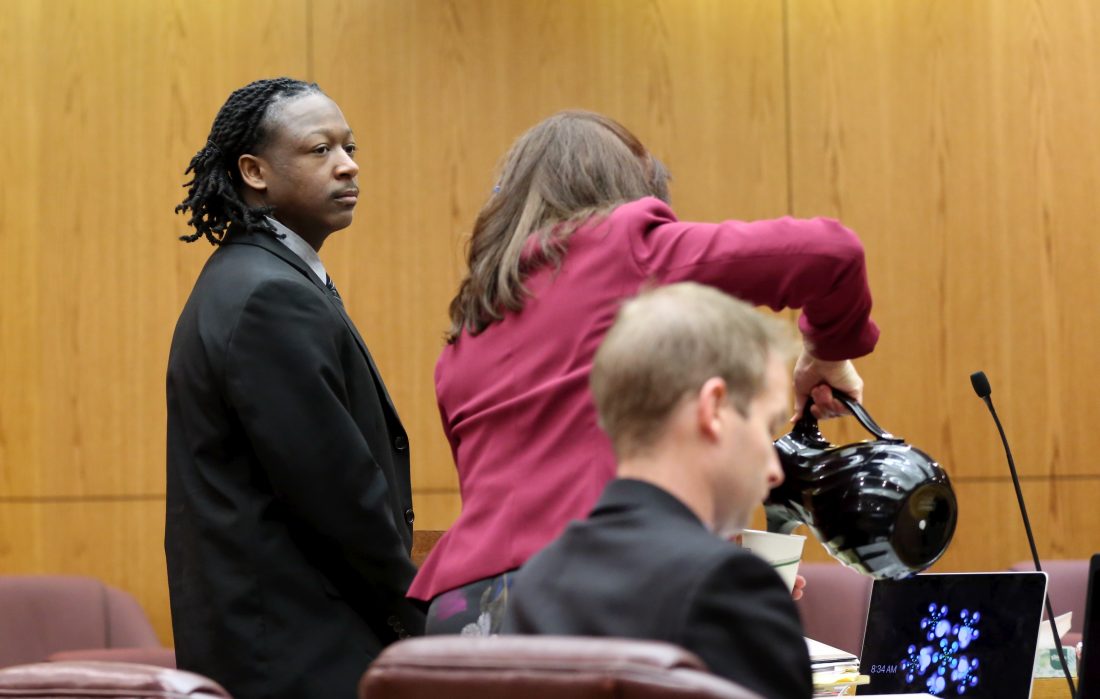 From left, Rontarus Washington Jr. stands next to his defense attorneys, Angela Keck and Adam Hall, during trial on Sept. 26, 2019 in Douglas County District Court.

Washington had turned over to police a pair of red and black Nike sliders that he said he was wearing when he walked into Mosso’s apartment and saw her body. Those tested negative for blood.

However, the soles of a pair of orange Nike sliders that police found in a suitcase inside Washington’s closet tested positive for blood and were later matched to Mosso’s DNA. The shoes also matched a footwear impression made in blood on a piece of paper that lay outside the bathroom door. No blood was discovered on the tops of the sandals or on the heel areas of the soles.

A small spot of blood on a cabinet door in Washington’s kitchen also provided insufficient genetic material for comparison. A sock and a T-shirt that were tested from his apartment indicated no blood.

Jeremiah Morris works for the Johnson County Sheriff’s Office Crime Lab in the trace evidence section, he said. His work in forensic science focuses on comparing materials such as hairs, fibers, duct tape, paint chips and other miscellaneous items to try to find differences between a known source and a material in question.

In this case, he was given a sample of Mosso’s hair by which to compare other hairs police found during a search of Washington’s apartment. None of the hairs was visually similar to the sample of Mosso’s.

When Mosso’s body was found, she was clutching roughly 200 hairs in her hands. According to previous testimony in the case, just two of the hairs were likely not her own, and those two were likely linked to Cantu Ruiz based on testing of a particular type of DNA collected from the hairs that cannot identify an individual but can rule out others. Mosso and Washington were ruled out as potential sources.

Morris testified that he also discovered small fragments of a rigid white substance among the hairs from her hands, which he separated out. He compared those pieces to another portion of the broken toilet tank lid, and he said the tank lid could have been the source of the pieces.

The jury trial was originally scheduled to last through Friday, Sept. 27; however, on Wednesday, Douglas County District Court Judge James McCabria informed the jurors that they should plan to be back Monday.