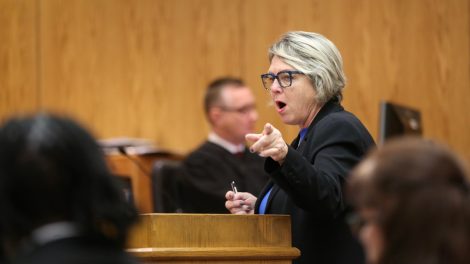 In closing arguments in a long-running Lawrence murder case, prosecutor C.J. Rieg portrayed defendant Rontarus Washington Jr. as an untrustworthy person who changed his story every time he spoke to police, both before and after they accused him of killing Justina Altamirano Mosso.

Defense attorney Adam Hall, however, emphasized the shortcomings he saw in the law enforcement investigation into a crime he said was fueled by passion, hatred and betrayal — none of which his client had reason to feel toward the victim.

Washington, 23, is charged with first-degree murder and aggravated burglary in connection with 19-year-old Mosso’s death, which investigators believe occurred on Friday, Nov. 7, 2014. He is also charged in the alternative with first-degree felony murder. About four years and nine months have passed since Washington was first taken into custody, and he has been waiting as his trial was delayed repeatedly.

Jury selection lasted through the first three days of trial, which began Monday, Sept. 9. Since then, 12 jurors and three alternates — not revealed until Tuesday afternoon — have heard hours of testimony from police officers and detectives involved in the investigation and experts who analyzed the forensic evidence, as well as from friends, family members and neighbors of the victim.

Tuesday afternoon, those jurors began their deliberations in the case. They will return Wednesday morning to continue them.

Hall and Washington’s other defense attorney, Angela Keck, have largely focused on Mosso’s husband, now-31-year-old Felipe Cantu Ruiz, as a possible alternative perpetrator. Cantu Ruiz has testified about his unhappy marriage to Mosso, and he has alleged that she cheated on him numerous times. The two lived together in apartment 13 of Lawrence’s Cedarwood Apartments, 1727 W. 24th St., until about a month before Mosso’s death, when she moved in with her cousin.

Washington lived in apartment 10 on the opposite side of the third floor at Cedarwood. In a video shown to the jury, Washington told police that he had noticed the door to No. 13 was open the afternoon of Mosso’s death. He said he called inside; when he didn’t get a response, he walked in, saw Mosso’s body in the bloody bathroom and ran out “like a little (expletive).” He said he didn’t call police because he was afraid he’d get blamed for Mosso’s death. 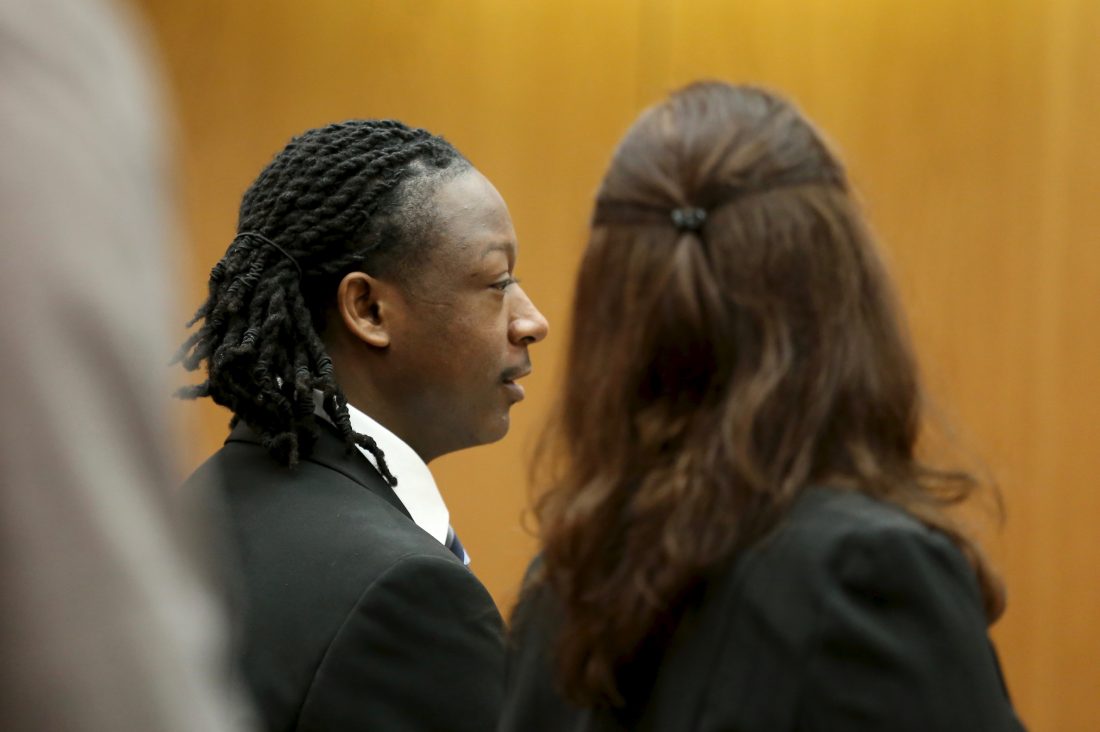 Rontarus Washington Jr., left, tells the judge he has decided not to testify during his trial, Tuesday, Oct. 1, 2019 in Douglas County District Court. At right is one of Washington’s defense attorneys, Angela Keck.

As she began her closing arguments, Rieg told jurors that the defense from the beginning has tried to bias them against Cantu Ruiz, bringing up incidents of alleged domestic violence between him and Mosso and noting that two hairs that likely came from Cantu Ruiz or one of his maternal relatives were found clutched in Mosso’s bloody left hand. The defense had also mentioned that Cantu Ruiz thought Mosso might have been pregnant at the time of her death, Rieg noted.

Experts in the case have testified that people lose about 100 hairs per day, Rieg reminded the jury. Blood is sticky, and it follows that Cantu Ruiz’s hair would have been found in Mosso’s hand. Of course Cantu Ruiz’s DNA, blood and fingerprints were also found all over the scene — “It’s his bathroom,” Rieg said emphatically.

On the other hand, Rieg said, Washington had told police that he did not touch anything or enter the bathroom the day he walked in to find Mosso’s body; however, an impression from his orange Nike slider sandal was found in blood on a piece of paper outside the bathroom door.

A print from Washington’s left ring finger was also found on a large piece of the toilet tank lid used to bash Mosso twice over the head. The print was on the inside of the lid pointing toward the middle, Rieg said. She held a light blue piece of paper with both hands and made a bashing motion — “Bam, bam.”

Rieg said that the first time Washington spoke with police, he had pointed out that the man in apartment 13 — Cantu Ruiz — had a big knife, “like a machete.”

“I wonder why he told police that — was it to get police to look at Felipe?” she said.

She noted Washington’s “progression of statements” in his discussions with police. He eventually told police he had been inside apartment 13 before, but he was afraid of getting in trouble for drinking. He was 18 at the time. She said his stories changed as he added or modified details, and that at one point he admitted that he’d lied to the police before.

Rieg said Washington had said he was scared of numerous things — the neighborhood, being alone in his apartment, and of the woman whose phone was in his possession. But never once did he tell police, “I’m scared there’s a killer in my building,” Rieg said.

Opening his argument, Hall put together a timeline of events based on past testimony: A man walked into the apartment, called out to see if anyone was inside, walked past the kitchenette and a table back to the back corner of the room by the dresser, then back around to the opposite side of the bed. Then he looked into the bathroom to see Mosso’s body lying there and ran out.

He might have had blood on his shoes. He didn’t check.

The man Hall was referring to was not Washington, he said, but Lawrence police Officer Robert Egidy, who along with a former Douglas County Sheriff’s Office deputy discovered Mosso’s body the night of Sunday, Nov. 9, 2014. 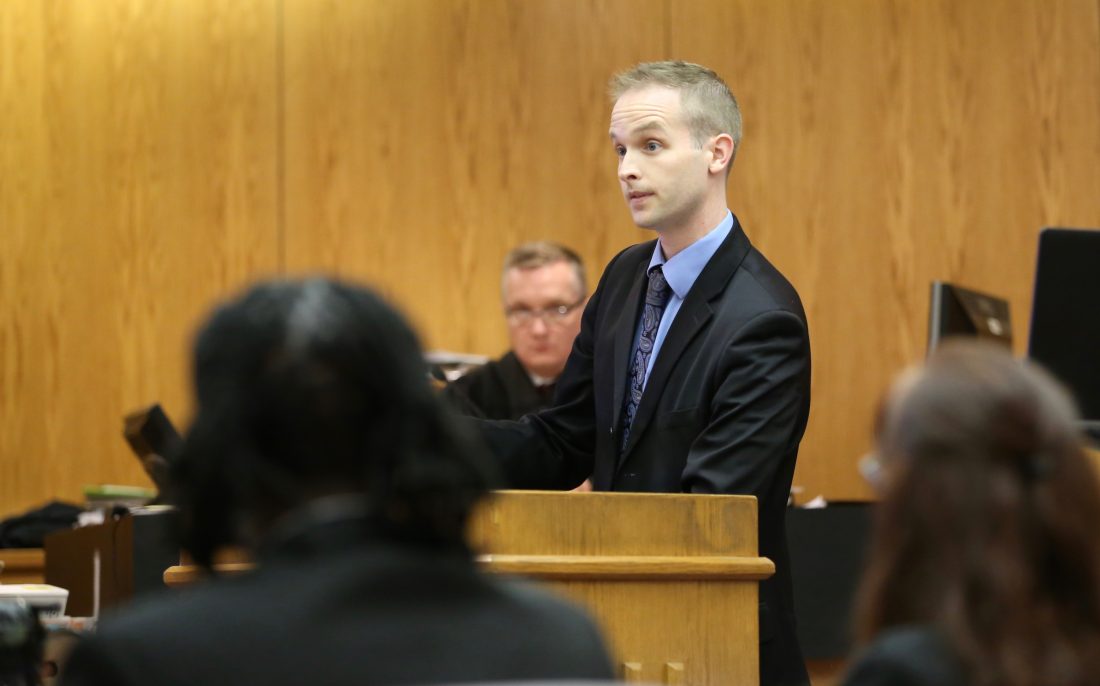 He told jurors that this was a crime of passion that required someone to exert the effort it takes to murder another human being “beyond the point of death.” He said there were 42 cuts, slashes and stab wounds to Mosso’s body, illustrating the point by pounding his left palm with his right fist and counting aloud to 42.

There was no evidence to suggest Washington even knew Mosso, Hall said; Cantu Ruiz, however, just hours prior had sent her messages saying she was the worst person he’d ever met and that he’d never forgive her.

Yes, Washington’s print was found on the inside of the toilet tank lid — in a bathroom he told police he’d used before, Hall said. Police never attempted to flush the toilet and did not know whether it functioned, though one officer did describe the building as “not well maintained.” Hall said the print was consistent with lifting the tank lid to try to get a nonfunctioning toilet to flush.

Hall said police had been willing to cut out drywall to send for fingerprint analysis, but they did not lift up the carpet to see how deeply one bloodstain had saturated the rug, and thus they would never have known whether there was enough blood on the carpet for Washington’s sandal to have made the impression outside the door without getting closer to Mosso’s body as one detective had concluded.

“Before you can make that conclusion, you have to do the work,” Hall said. 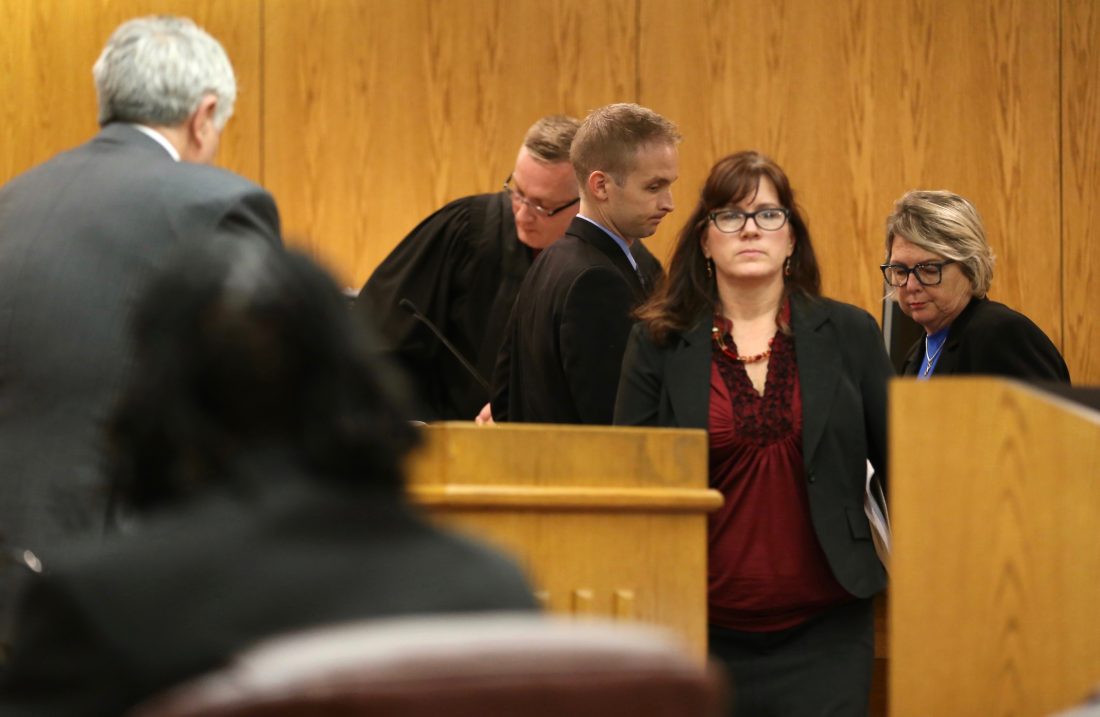 Facing the camera, from left, Douglas County District Court Judge James McCabria, defense attorneys Adam Hall and Angela Keck, and prosecutor C.J. Rieg finish a conversation before dismissing the jury to deliberate during trial for Rontarus Wahington Jr. on Tuesday, Oct. 1, 2019. Bailiff Rick Lysen is standing near the bench; Washington is seated in the foreground.

He said police had sprayed an agent that reacts with blood outside Washington’s door, and it was negative for blood, but there were some dark spots they couldn’t explain so they tried another test. It did not indicate the presence of blood, either. Still, police conducted an experiment and also sent a swab of the door to the Kansas Bureau of Investigation for testing.

“(There were) four attempts to put blood on Rontarus Washington’s door, and four failures to do that,” Hall said.

Hall said Washington was an 18-year-old black male; he was new to the town and the state, and he had been a special education student in school. He got excited when police told him he was their best witness, and he waived his Miranda rights and continued to answer questions.

“Should he have trusted police, or did they confirm his worst fears?” Hall asked.

In her rebuttal, Rieg said the defense had portrayed Washington as a young black man who was scared of police.

But in the video of his interview with police, “he didn’t look like a special ed kid that was uncomfortable with his surroundings,” Rieg said. Rather, Washington was the one driving that conversation, choosing the topics and evading answering certain questions, she said. 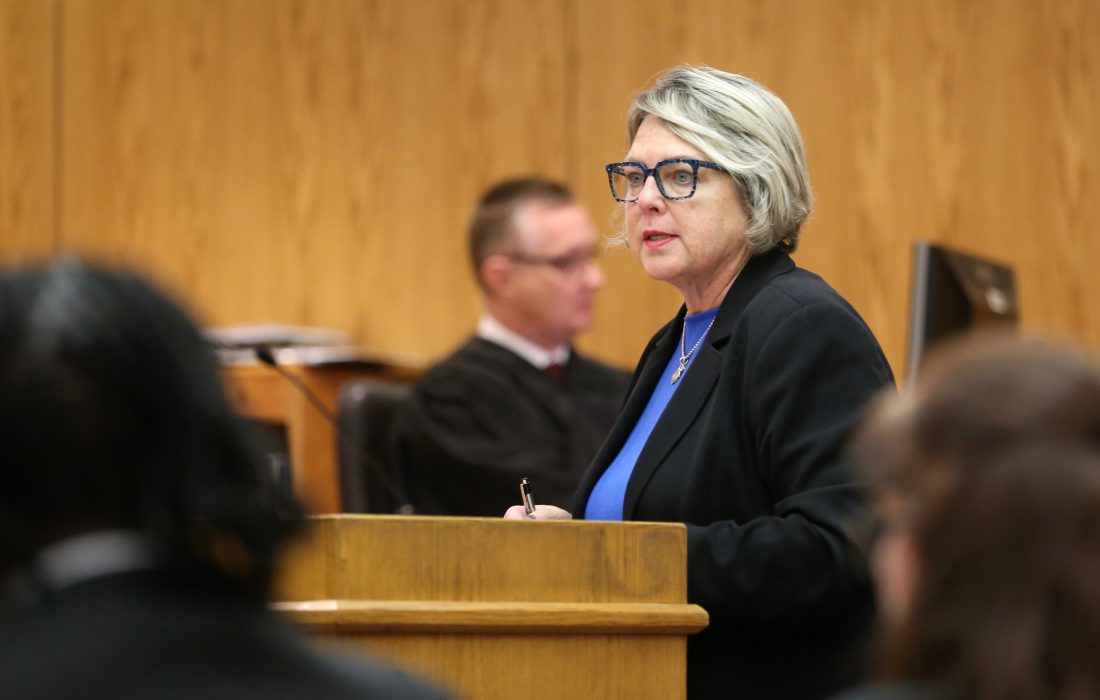 And investigators didn’t find any loot in Washington’s apartment — he’d had two and a half weeks to get rid of it, Rieg said. He just couldn’t get rid of his “precious” Nike sliders, and “he couldn’t get his DNA off Justina,” she said.

Partial DNA evidence fitting at least three male profiles was found on one of the clippings of Mosso’s fingernails. A KBI lab expert testified that he had to do a second test on solely the Y chromosomes to seek out just the male DNA. He found a partial DNA “haplotype” that was consistent with Washington’s, but statistically, it would have matched about 1 in 2,000 men in the general population.

As a means of comparison, other DNA evidence from swabs of the scene yielded partial profiles that matched Mosso’s and Cantu Ruiz’s that would only be found at a maximum frequency of 1 in multiple quadrillions.

Rieg said not every question could be answered, but she said the jury had enough evidence to find the defendant guilty of first-degree murder.

“There’s no perfect investigation,” Rieg said. “You base your decision on the evidence that you have.”

Jurors will return Wednesday morning to continue deliberating whether the state has proved beyond a reasonable doubt that Washington killed Mosso.

In addition to the charges filed against Washington, jurors are to consider lesser charges of second-degree murder and burglary, Douglas County District Court Judge James McCabria instructed them, but all charges are to be considered independently and uninfluenced by the jurors’ decisions on other charges. 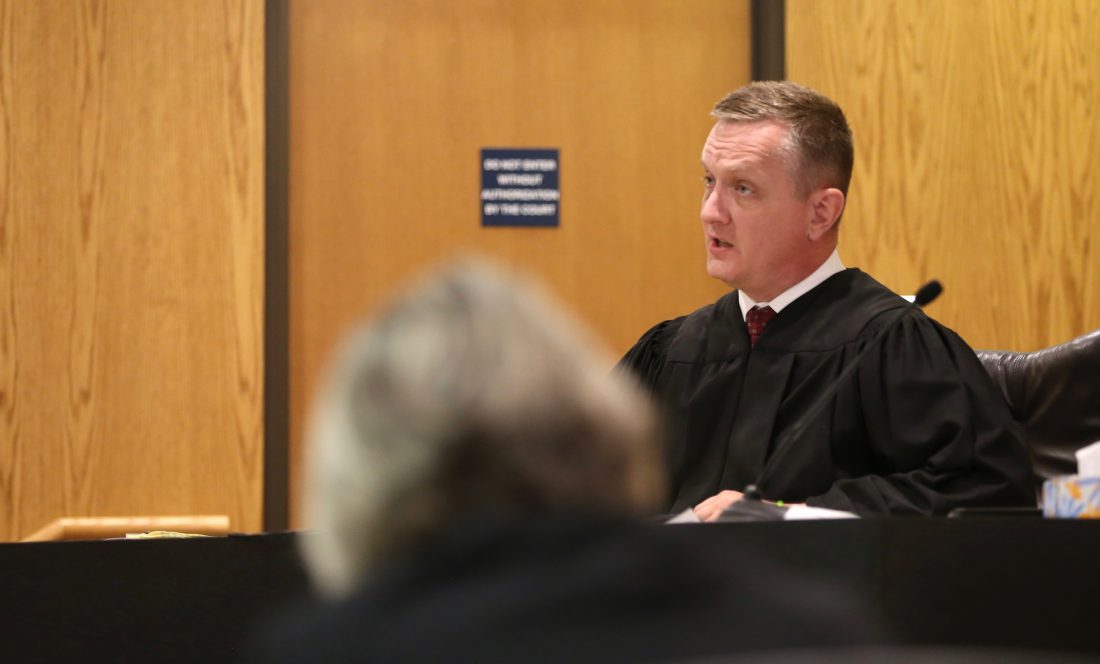 Douglas County District Court Judge James McCabria informs Rontarus Washington Jr. (not pictured) of his right to testify during his own trial on Tuesday, Oct. 1, 2019.

If the jurors have any reasonable doubt regarding the charges, they must return a verdict of not guilty, McCabria said.

After adjourning briefly to begin deliberations just before 4 p.m. Tuesday, the jurors requested a list of all the admitted evidence, but that will not be provided because such a list was not created and admitted during the trial. They also requested a readback of testimony from Landon Dallas, which will be provided Wednesday morning.