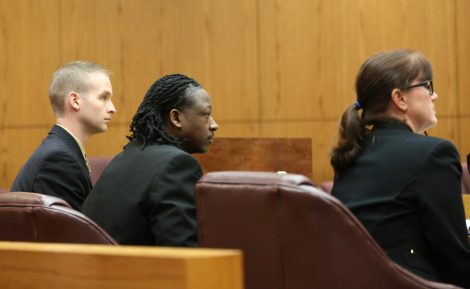 Rontarus Washington Jr., center, sits between his defense attorneys, Adam Hall (left) and Angela Keck, on Wednesday, Oct. 2, 2019, in Douglas County District Court. Jurors for Washington's trial had requested a read-back of some testimony as they continued their deliberations Wednesday morning.

A jury on Wednesday did not reach a verdict in a Lawrence murder trial nearly five years in the making.

The 12 jurors on the panel, plus three alternates, have spent the past three and a half weeks hearing evidence, testimony and arguments. They must decide whether they are convinced beyond a reasonable doubt that the defendant bludgeoned and stabbed 19-year-old Justina Altamirano Mosso to death on or about Nov. 7, 2014.

Washington lived on the opposite side of the third floor from Mosso in Lawrence’s Cedarwood Apartments, 1727 W. 24th St. Mosso’s body was found in the bathroom two days later on Nov. 9, 2014, after her husband, Felipe Cantu Ruiz, and her cousin separately reported her missing.

The state alleges that Washington was in Mosso’s apartment when he shouldn’t have been, hoping to steal property. In her closing arguments Tuesday, prosecutor C.J. Rieg said Washington bashed Mosso twice over the head with a toilet tank lid — a weapon of opportunity — and then went to get a knife from the kitchen to finish the job.

The evidence shows Washington’s fingerprint was found on a large piece of the broken toilet tank lid. Mosso’s blood was also found on the bottoms of a pair of orange Nike slide sandals police collected from a suitcase inside Washington’s apartment.

The defense has largely focused on Cantu Ruiz as a possible alternative perpetrator. In his closing arguments Tuesday afternoon, defense attorney Adam Hall told jurors this was a crime of passion, hatred and betrayal, none of which Washington had any reason to feel toward Mosso. Washington walked into the apartment, discovered Mosso’s body and ran out, and he didn’t call police because he was scared he would be blamed for the death, Hall said — and once he told police about it, they confirmed his worst fears.

Jurors requested a list of all the admitted evidence in the case, which the judge said could not be provided. Such a list was not created and admitted during the trial.

They also requested a read-back of testimony from an acquaintance of Washington’s who told police he had seen him the evening of Nov. 7, 2014, and they heard that first thing Wednesday morning.

Jurors began to deliberate after closing arguments from about 4 to 5 p.m. Tuesday, then resumed at 8:30 a.m. Wednesday and continued until around 4:35 p.m., except for a brief midday break. The jurors opted to recess for the day, regroup and return to continue deliberations early Thursday morning.

Jurors are also to consider the lesser charges of second-degree murder and burglary, according to their instructions from the judge. They are to consider each charge independently from the others, and if they have a single reasonable doubt, they must find the defendant not guilty on that charge, the judge instructed them.

The trial had been scheduled to last from Sept. 9 through Sept. 27.