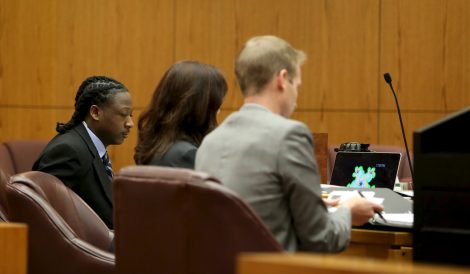 The tiny yellow jewels, which dotted a corner of an apartment’s bedroom and bathroom floors, are believed to have come from a bracelet the victim was wearing at the time of her death.

Justina Altamirano Mosso, 19, was found dead Nov. 9, 2014, her face and many injuries obscured by blood and her own hair as she lay slumped against the wall and bathtub inside Lawrence’s Cedarwood Apartments, 1727 W. 24th St. She is believed to have died two days prior, in the afternoon of Friday, Nov. 7, 2014.

Rontarus Washington Jr., 23, is charged with first-degree murder and aggravated burglary in connection with Mosso’s death. Washington has been in custody for about four years and eight months awaiting a trial that has been delayed numerous times but finally began Sept. 9.

On Wednesday, now-retired Lawrence police Detective David Axman explained to jurors how he and a team of three other specialists documented the crime scene after Mosso’s body was discovered when other officers had gone to check on her welfare at the bequest of her concerned husband and cousin. He also told them about the county coroner’s actions at the scene, before the body was taken to the forensic lab.

Detectives took several photos of the interior hallway of the apartment complex leading up to apartment No. 13, which Mosso had shared with her husband, Felipe Cantu Ruiz, until she moved out about a month before her death. Cantu Ruiz has testified that their relationship was rocked by her alleged infidelity, and the morning of the day she died, he had gotten a ride from a friend to go live in Manhattan.

Just inside the front door, photos showed footwear impressions in what was believed to be dried blood on the linoleum floor of the kitchenette. A bottle of bleach sat on the kitchen counter, a spatula lay on the floor and a broom appeared to have been knocked onto the floor.

Further into the small studio apartment is a carpeted bedroom that also served as a dining room. Photos showed a table dotted with beer bottles, Coca Cola cans, a pack of Kools, some chewing gum and a broken piece of a mirror, Axman pointed out. There were also what appeared to be some limes and salt on the table, he said.

On the floor of the bedroom, along with several beer cans, clothing articles and pieces of paper were a butter knife with a white handle, a watch and a purple Kansas State University wristband. There was also a piece of paper that detectives believed bore a footwear impression in blood. 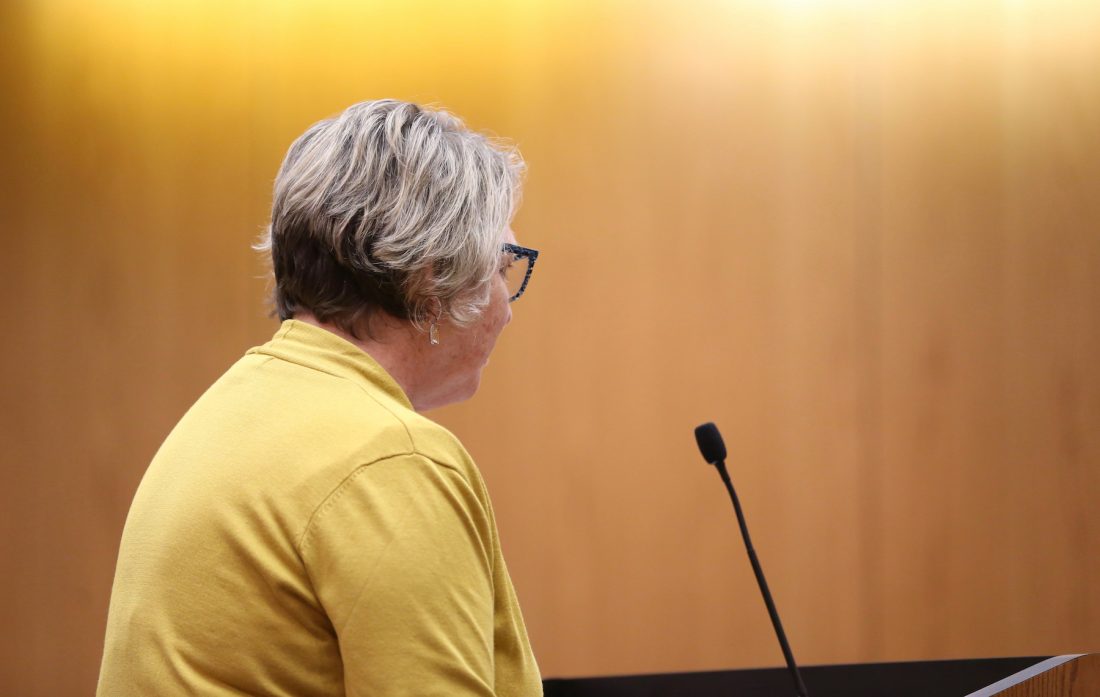 In front of the bathroom on the bedroom floor were two large pieces of a toilet tank lid, which prosecutor C.J. Rieg has alleged Washington used to bash Mosso twice in the head. She had also been stabbed 34 times, Rieg had said in her opening arguments.

Inside the bathroom, another butter knife lay on the vanity next to some razors, a toothbrush, a pair of scissors and various other personal hygiene products. Smaller pieces of the toilet tank lid lay on the floor next to the toilet.

Blood had pooled on the edge of the tub where Mosso’s head lay, and it was clear to see on the lighter parts of the checkerboard-style black and white tile of the bathroom floor.

Detectives also collected a blue plaid shirt that was on the bathroom floor, partially under Mosso’s body. Cantu Ruiz had previously testified that it was his shirt.

Altogether, detectives spent about five hours at the scene starting after midnight Nov. 10, 2014, before they went home to get some sleep, Axman testified. They went back the next afternoon to continue processing the crime scene.

Earlier in the day Wednesday, the man who drove Cantu Ruiz to Manhattan testified: Juan Carlos Pacheco, who said he has known Cantu Ruiz since they were kids in Iliatenco, Guerrero, Mexico.

Pacheco said Cantu Ruiz had called him and asked him for a ride to Manhattan because “he had problems with his woman and he didn’t want to be here,” he testified through an interpreter.

He came to get Cantu Ruiz, and while the two were in the parking lot of Cedarwood Apartments, they saw a black man in the parking lot, but Pacheco said he didn’t really remember what the man looked like and he didn’t understand what he was saying because the man was speaking English.

Pacheco said he drove Cantu Ruiz in his pickup truck, taking Interstate 70 to Manhattan and driving about 70 mph with no stops. He said they went first to his home, then to the home of Eugenio Donato Damian, who had extra space where Cantu Ruiz could stay until he could afford a place of his own. He said they arrived at Damian’s home around 9 p.m.

Cross-examined by defense attorney Adam Hall, Pacheco said they had gotten tickets for the tolls en route to Manhattan, but police didn’t ask him about that. He also said that when Cantu Ruiz went back to Lawrence a couple of days later, concerned when Mosso wasn’t answering her phone, he left some sandals in Pacheco’s truck.

Damian took the witness stand next. He said he didn’t really know Cantu Ruiz, and he didn’t give him a key to his home, but he was going to let him stay there as a favor to his friend Pacheco. Damian said the two men arrived at his home around 10 p.m.

Damian also testified that Cantu Ruiz never brought his belongings inside, nor changed his clothes for the couple of nights he stayed there; he’d left his clothes in Pacheco’s truck.

Rieg also played an audio recording of an interview between Lawrence police Detective Amy Price and Washington. The audio was fuzzy, but Washington spoke with Price and another detective tasked with canvassing the area on Monday, Nov. 10, 2014, the day after Mosso’s body was discovered.

In the interview in his apartment, No. 10 at Cedarwood, Washington told the detectives that he had encountered Cantu Ruiz a few times. Once, he said, Cantu Ruiz had come into the hallway and threatened Washington and a maintenance man with a knife, asking if there were any problems. Another time, Washington said in the interview, he had heard “sex noises” and “bumping” coming from apartment 13, when Cantu Ruiz was inside with a prostitute.

Price said Washington jumped from topic to topic during the interview, but he didn’t seem scared to talk to the police.

The trial will resume Thursday morning. It is scheduled to last through at least Sept. 27.