Lawrence murder victim’s husband believed she was pregnant at time of her death, he testifies 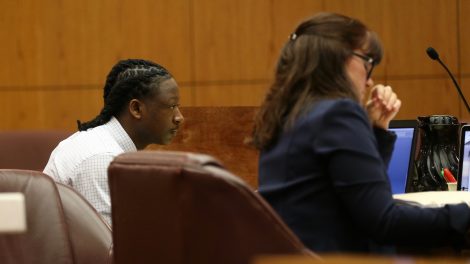 At the time of Justina Altamirano Mosso’s death, her husband believed she was pregnant with a “bastard child,” he testified Friday.

Mosso was 19 when she was found murdered in the bathroom of the apartment she had shared with her husband at 1727 W. 24th St., Lawrence’s Cedarwood Apartments. Officers testified Thursday that they had found her slumped against the bathtub and the wall, her head and face covered in blood and her own long hair, on Nov. 9, 2014.

Rontarus Washington Jr., 23, is charged with first-degree murder and aggravated burglary in connection with her death. He has been in custody for more than four years as his trial has been delayed multiple times.

Mosso’s husband, Felipe Cantu Ruiz, now 31, testified from roughly 10:30 a.m. Friday through the end of proceedings at 4 p.m., and his testimony will resume Monday morning.

Cantu Ruiz answered questions from prosecutor C.J. Rieg through the morning and most of the afternoon.

He recounted the morning of Nov. 7, 2014, the day Mosso is believed to have died. He had been fired from his job at a restaurant because he got drunk the night before and overslept, Cantu Ruiz testified through an interpreter. He said he couldn’t continue his relationship with Mosso because she had cheated on him for a fourth time.

Cantu Ruiz said he wanted to be happy, so he packed up his essentials — just some clothes, leaving much behind — and asked his friend, Juan Carlos Pacheco, to come get him and drive him to Manhattan. 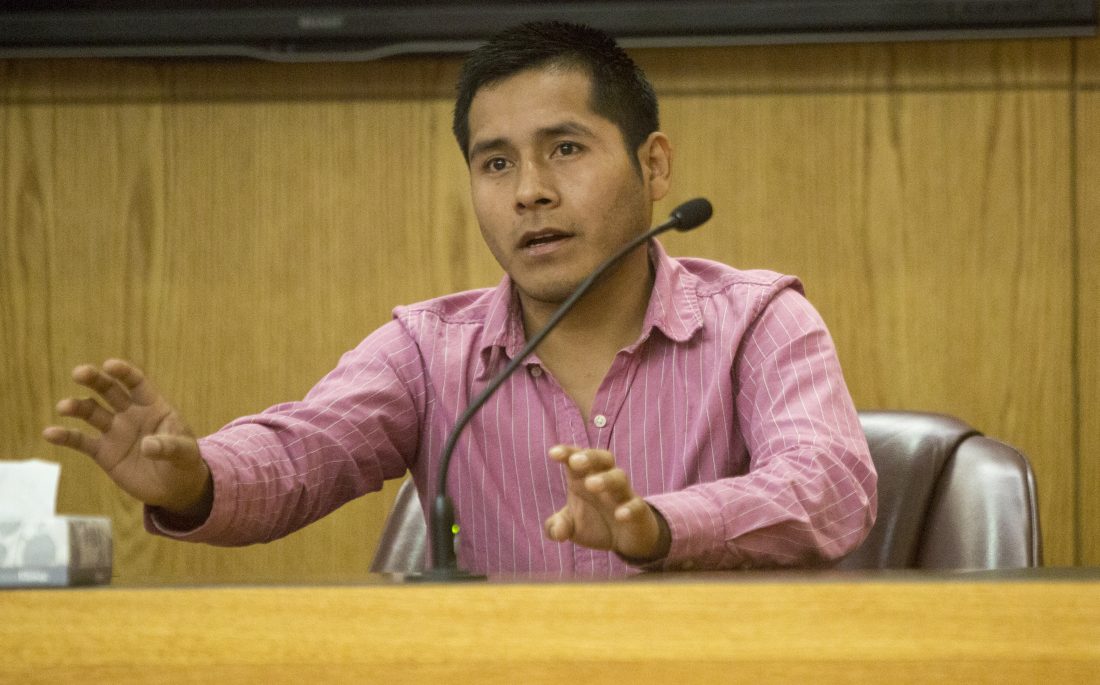 In this file photo from Sept. 4, 2015, Felipe Cantu Ruiz testifies at the preliminary hearing of Rontarus Washington Jr., who is charged with first-degree murder in connection with the Nov. 7, 2014 death of Cantu Ruiz’s wife, Justina Altamirano Mosso.

He saw Mosso briefly the afternoon of Nov. 7 so he could say goodbye. He testified that she tried to hit him and he extended his hands to keep her away, though he said he didn’t actually touch her.

He spent much of Friday and Saturday drinking with friends in Manhattan, he testified. On Sunday morning, though, he heard from one of Mosso’s friends that no one could find her, and he started to panic. He first called a local pastor, then police — several times — asking them to go knock on the apartment’s door. Her body was not found until later that night.

She began with some photos that appeared to show injuries to Mosso’s lip and cheek. Cantu Ruiz confirmed that the photos showed how Mosso appeared on March 13, 2014, the day police were called to an argument between the couple. Cantu Ruiz was booked into the jail that night but he was released in the morning without being charged.

Mosso was actually the one who would provoke him and sometimes hit him, Cantu Ruiz said; she would find excuses to argue. But because she was the one who was cheating in their relationship, he said, she always wanted to come back and wouldn’t let him move on with his life. He drank to console himself, he said.

“I told her the first time she had cheated on me, betrayed me, I forgave her from the heart because of my family, because of my daughter,” Cantu Ruiz testified Friday, through an interpreter, “and she did it again a second and third and fourth and fifth time.”

Defense attorney Angela Keck, standing, cross-examines Felipe Cantu Ruiz (not pictured), who was married to Justina Altamirano Mosso at the time of her murder in 2014, during trial for Keck’s client, Rontarus Washington Jr., on Friday, Sept. 13, 2019 in Douglas County District Court.

Cantu Ruiz said he knew that Mosso was regularly seeing another man, Fernando Martinez, in the weeks leading up to her death. He said that he had been messaging with ex-girlfriends back in Mexico who wanted to come to the United States because he was unhappy with Mosso and needed to restart his life, he said. Mosso did not know about those girls, he testified.

Then Keck asked him whether in October 2014 he had messaged Martinez telling him to keep his son there, because Mosso was pregnant. He said he had.

He said Mosso never took a pregnancy test, but she had told him that she wasn’t having her period, and the couple had not been careful with birth control. He said he “didn’t even know” whether it was his child or Martinez’s, but because Martinez wanted to be with Mosso, he had to take care of everything.

When Keck asked whether he recalled telling Mosso she was pregnant with a “bastard child,” he first denied it. Asked if he wanted to see a printout of his text messages, he said that wasn’t necessary — he “probably” said it, because he was angry.

He had also told her he was sick of her “whoring around,” he confirmed, and that “it’s clear that you don’t want a family.”

Answering questions from Rieg on Friday, Cantu Ruiz testified that he often had injuries on his hands because he’s a cook and he frequently cuts himself.

He also had a knife that he always kept next to the stovetop on the kitchen counter. Walking through the apartment with police after Mosso’s body was discovered, he pointed out to the police that it was missing. Nearby on the counter where the knife should’ve been was a bottle of bleach, and Cantu Ruiz said he didn’t remember putting it there but it normally didn’t sit out on the counter. 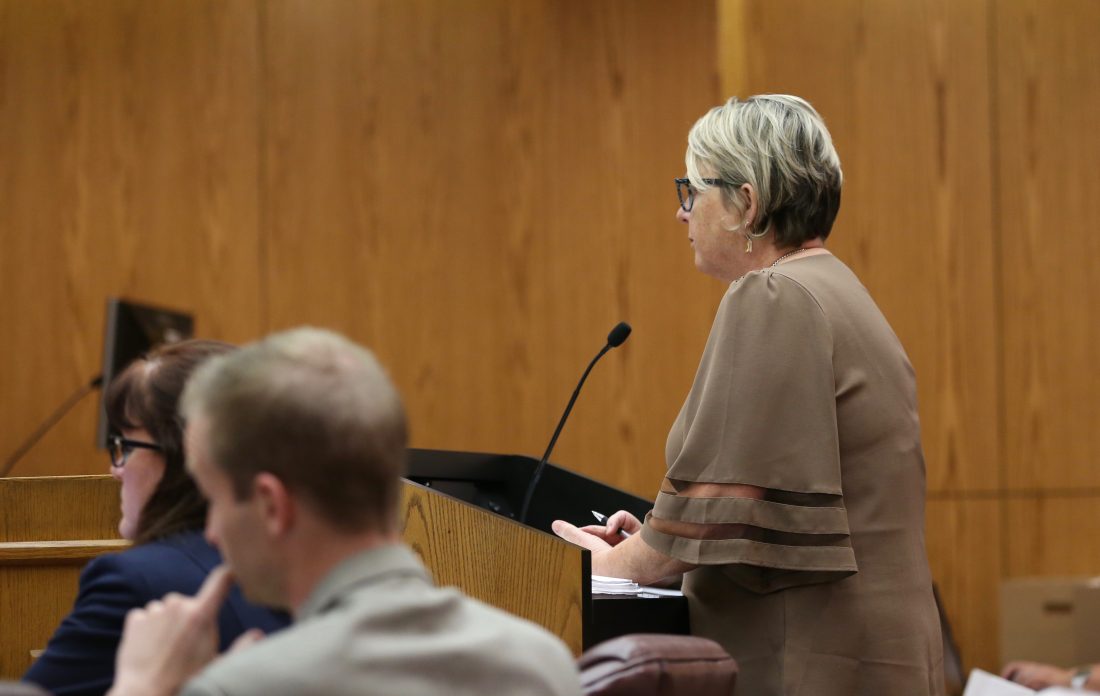 Prosecutor C.J. Rieg, standing, questions Felipe Cantu Ruiz (not pictured), who was married to Justina Altamirano Mosso at the time of her murder in 2014, in trial for Rontarus Washington Jr. on Sept. 13, 2019 in Douglas County District Court. Seated are Washington’s defense attorneys, Angela Keck and Adam Hall.

He also talked about a night when a black man and a black woman were sitting near the entrance to the apartment building as he got home from work one evening. It was a few weeks before Mosso’s death, he testified.

He didn’t speak English, but he indicated to them that if they wanted beer, this was his home and they could come have a beer, he said.

After that, Cantu Ruiz said he had way too much to drink, and with the woman, “I don’t know, we had sex, I don’t know.” The man sat at the table but didn’t stay long, and when he left, some change was missing from where he’d been seated, Cantu Ruiz said.

He said the same man had come to his apartment again once after that and demanded money. Cantu Ruiz said he gave the man $30 but he demanded more, and he eventually gave him $60 but he didn’t have anymore money.

Another time, the same man knocked on his door again and he didn’t answer, Cantu Ruiz said. When he saw through the peephole that the man was walking away, he opened the door, holding a knife “out of precaution,” and said something to the effect of “no more problems” or he would call police, Cantu Ruiz testified.

The trial will resume Monday morning and is scheduled to last through Sept. 27. 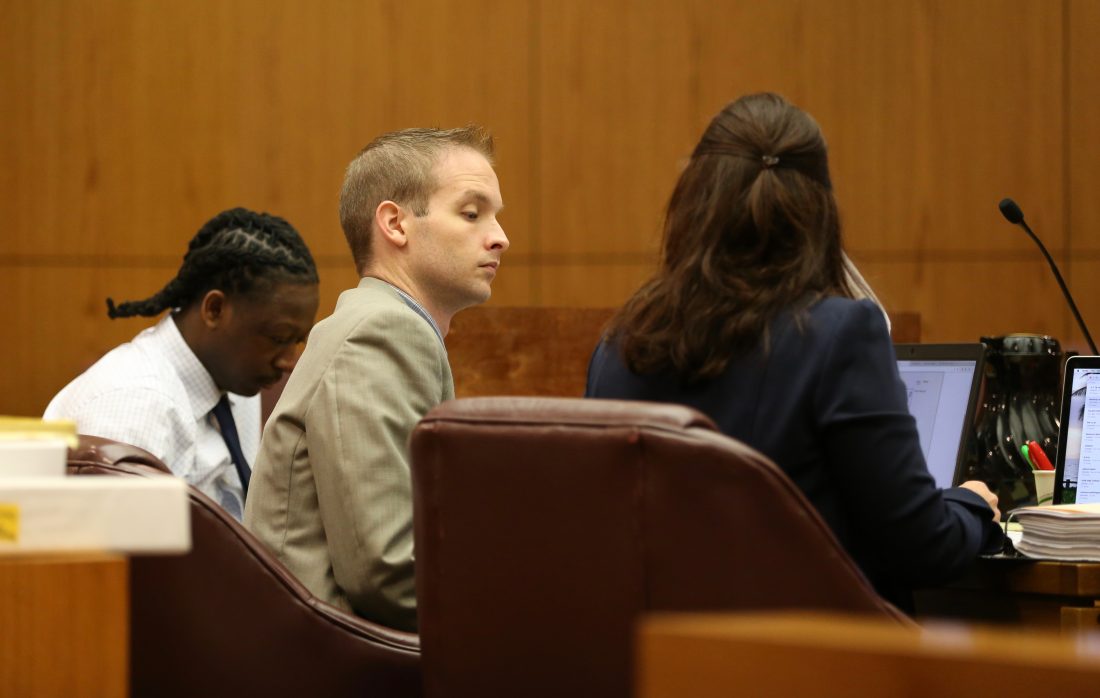