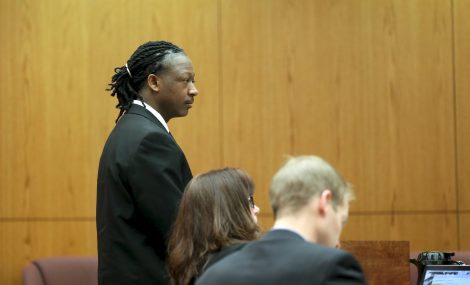 Rontarus Washington Jr. stands as he waits for the jury to enter during his trial on Tuesday, Sept. 24, 2019 in Douglas County District Court. Seated next to Washington are defense attorneys Angela Keck and Adam Hall.

The day after a 19-year-old woman was murdered in 2014, her neighbor — the man accused of killing her — reportedly asked another man in their apartment building for a ride across the country.

William Enick, a resident of Cedarwood Apartments’ first floor back in 2014, testified Tuesday that Rontarus Washington Jr., now 23, had come to his door on Nov. 8, 2014. Washington said he was in trouble and they needed to leave now to get to Tennessee, Enick testified; he remembers the specific date because it was his birthday.

Enick didn’t mention the encounter to police until after Washington’s trial began Sept. 9 in Douglas County District Court — nearly five years after Justina Altamirano Mosso’s death, which authorities believe to have occurred the afternoon of Friday, Nov. 7, 2014. The trial has been delayed repeatedly, and Washington, charged with first-degree murder and aggravated burglary in connection with Mosso’s death, has been in custody for about four years and eight months.

But when police first interviewed Enick in the days after Mosso’s body was found on Sunday, Nov. 9, 2014, he did tell them that around the same time, he saw a Hispanic male in his late 20s whom he had never seen at the complex before. He described the man as appearing “aggressive.”

Mosso had lived in apartment No. 13 on the third floor of Lawrence’s Cedarwood Apartments, 1727 W. 24th St., with her husband, Felipe Cantu Ruiz. Washington lived in No. 10, on the opposite end of the third floor.

Jurors on Tuesday heard testimony from Enick, of No. 1, and Paula Gonzalez and Oscar Rojo Barcenas, who lived next door to Mosso and Cantu Ruiz in No. 11. Gonzalez recalled hearing a scream that haunts her to this day; Rojo Barcenas described hearing the couple’s arguments and how their car had been moved in the parking lot after Mosso’s death. 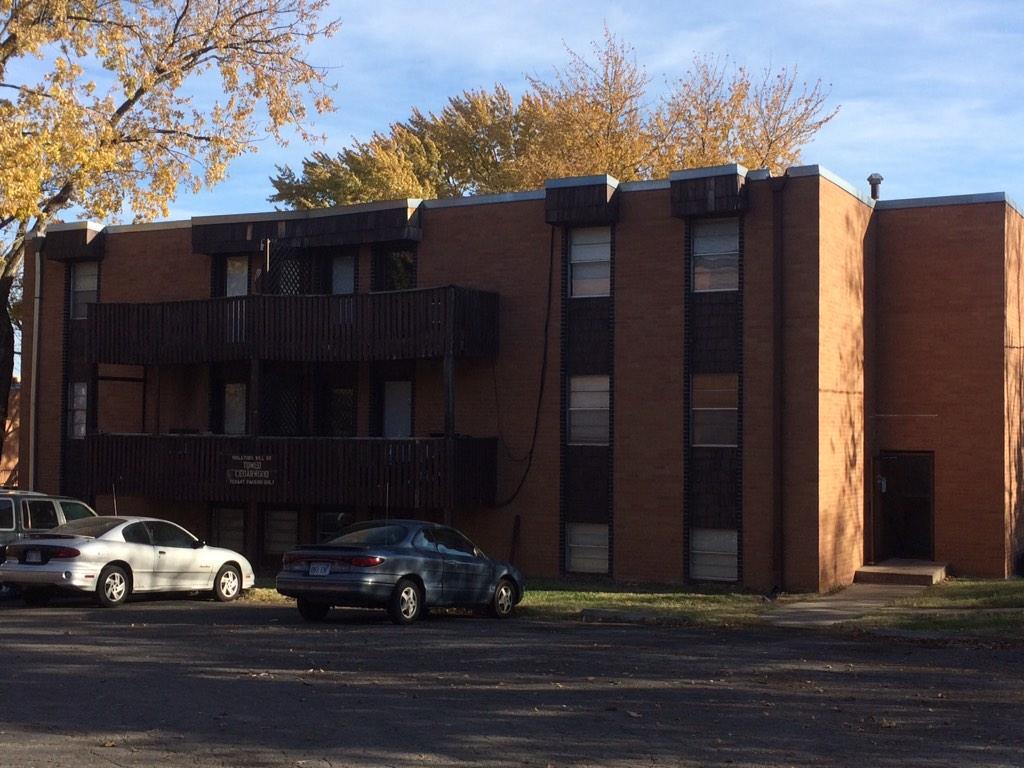 Enick said that on that Saturday, Nov. 8, 2014, he had roasted a chicken for his birthday meal with his common-law wife. Washington knocked on his door, said he was in trouble and “you’ve got to take me to Tennessee,” Enick testified.

After some discussion among defense attorneys Angela Keck and Adam Hall, prosecutor C.J. Rieg and Douglas County District Court Judge James McCabria, Enick was allowed to share the rest of the alleged events of that day.

Enick said he was familiar with Washington from him previously asking for a ride to the grocery store or a pawn shop. He had told police Washington was “not overly friendly” and that he was uncomfortable around him. 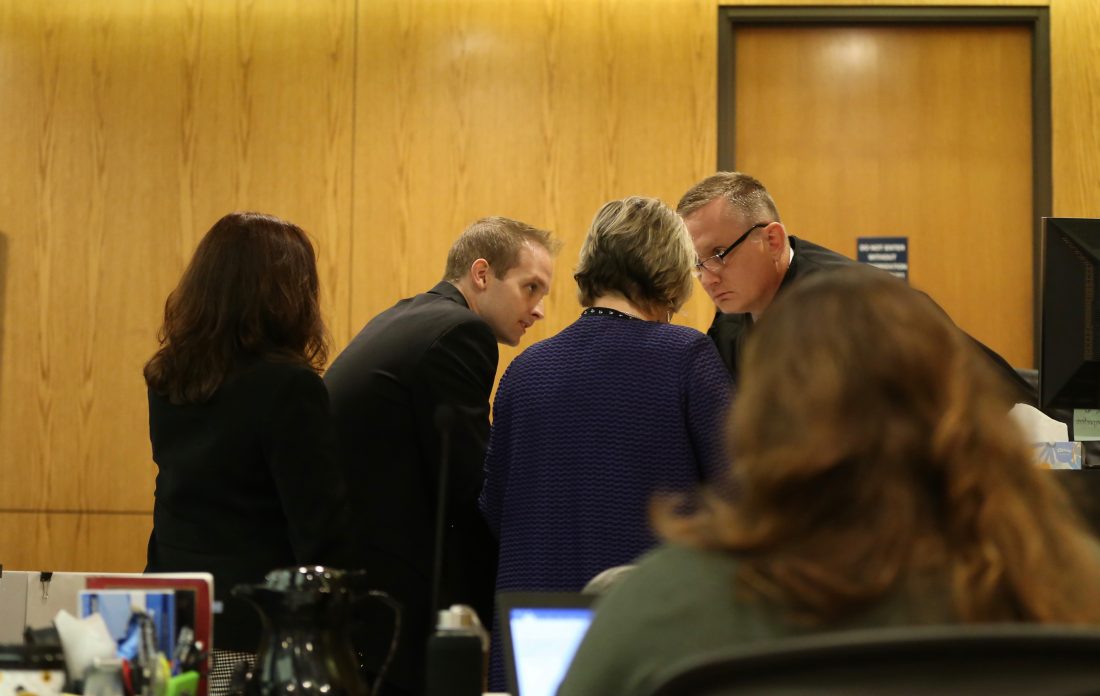 That Saturday, Enick said, he told then-18-year-old Washington that he couldn’t give him a ride because it was his birthday, then said his car wouldn’t make the trip. Washington appeared to be on the verge of a panic attack, Enick said, so he had braced himself to catch the teen if he passed out.

Enick said at that moment, both he and his wife noticed that Washington’s eyes had settled on a knife set on the kitchen table. Enick moved to stand between Washington and the knife set and repeated that his car wouldn’t make the trip to Tennessee. Then Washington said “OK” and left, Enick said.

On cross-examination, Hall asked Enick whether he had said no after being asked by police in 2014 if he had seen anything suspicious around the weekend of Mosso’s death. Enick confirmed that he had.

Gonzalez and Rojo Barcenas testified separately through interpreters who translated between English and Spanish. Both said they had heard yelling from apartment 13.

Gonzalez testified that she had heard Cantu Ruiz shouting on the phone with someone, saying “She’s not my girlfriend, she’s my wife.” Rojo Barcenas said that he heard the couple screaming and yelling “almost every day” while they lived there together.

Gonzalez shared what she recalled from Nov. 7, 2014: She and Rojo Barcenas arrived home at Cedarwood around 4 p.m., and they saw Mosso sitting in the driver’s seat of the black Ford Focus she and Cantu Ruiz had purchased together. Gonzalez said she wanted to say hello, but Mosso was talking on her cellphone. She looked “normal” — not angry or sad, Gonzalez said.

The couple went upstairs, and Gonzalez said she rested for 15 to 20 minutes before she took a shower. While in the shower, she heard a woman scream, and to this day, “I live with that fear,” she said. A few moments later, she heard the door close.

Rojo Barcenas said he recalled parking in the space next to Mosso that day, and he said both cars were toward the far end of the building’s parking lot. But when the homicide investigation began two days later and police asked him who owned the car, he noticed that it had moved a few spots away from where he had seen Mosso parked.

According to previous testimony from Cantu Ruiz and the friend who had sold him the car, Cantu Ruiz had given the only car key to Mosso that Friday. The key was found in the pocket of her jacket during the autopsy.

Rojo Barcenas said he never told police that he believed the car had moved because no one ever asked.

Also Tuesday, jurors heard from the woman whom Washington had described in police interviews as a “black prostitute.”

Marzetta Yarbrough, of Lawrence, testified that on Halloween of 2014, she had stopped by Cedarwood Apartments and encountered Washington and Cantu Ruiz near the apartment entryway. She’d had a couple of drinks and she was “feeling good.” 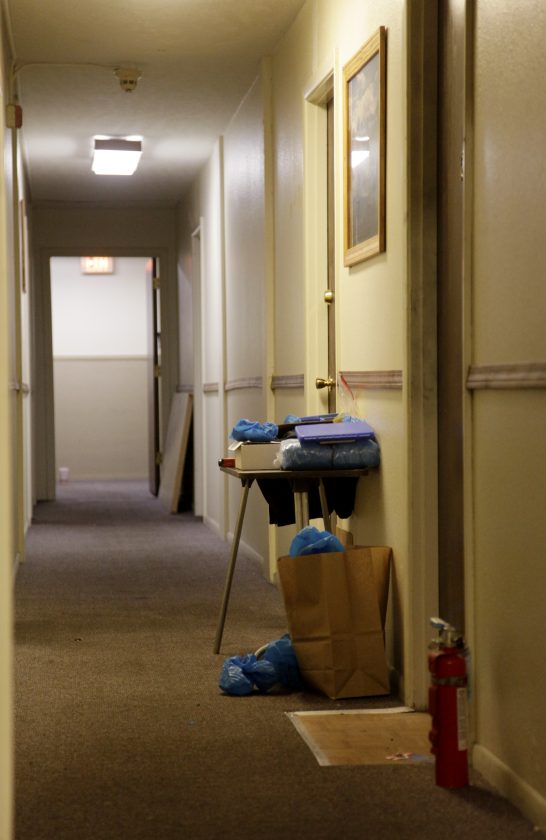 In this Journal-World file photo from November 2014, evidence and other items sit outside of apartment No. 13 at Lawrence’s Cedarwood Apartments, 1727 W. 24th St.

Washington was saying words like “money, dinero,” trying to convey to Cantu Ruiz that he needed to pay Yarbrough, she testified. The three then went into Cantu Ruiz’s apartment, No. 13, she said, and Washington didn’t stay for long.

Later, Yarbrough said that Cantu Ruiz wouldn’t pay her, and that she couldn’t find her phone or money she’d had in her purse.

Yarbrough believed Washington had her phone, and she said she tried to call and text it multiple times from multiple numbers. Washington had told police in an interview played for the jury previously that Yarbrough had given him the phone, but now he was nervous about having it and he wanted to turn it in to police.

Detectives did confirm with Yarbrough that the phone belonged to her; she confirmed that Washington was the person she believed had it and disputed his version of events. To this day, she still doesn’t have the phone, she testified.

Former Lawrence Police Detective Zachariah Thomas began his testimony Tuesday about his role in the investigation of the crime scene. He had focused largely on blood spatter analysis, also helping to lift fingerprints, shoe impressions and other such evidence. 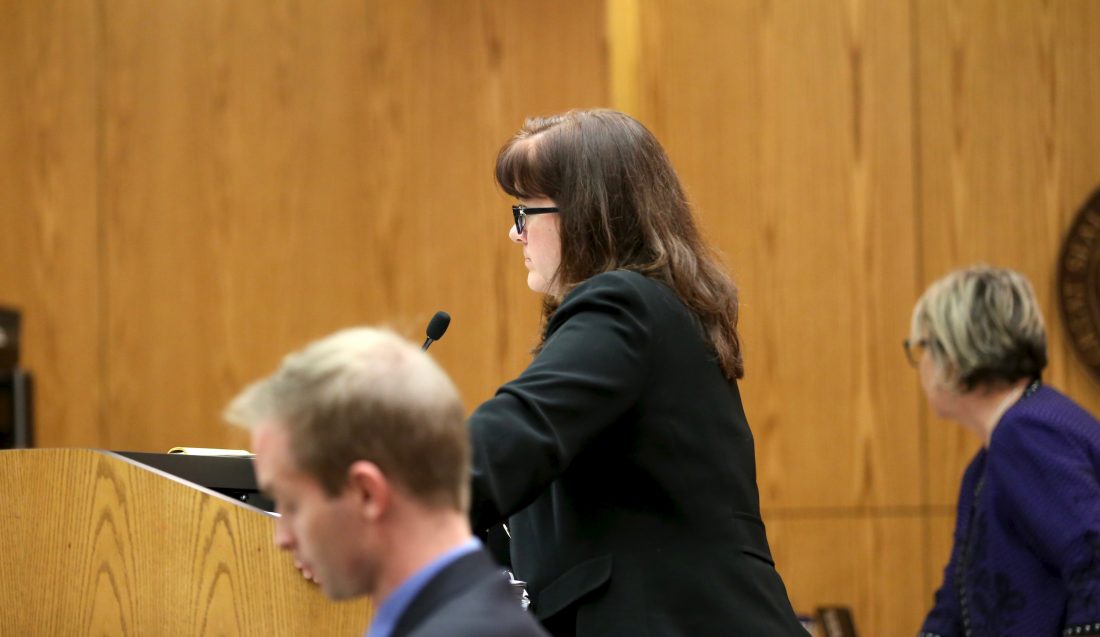 Defense attorney Angela Keck, standing at the lectern, looks toward a witness as prosecutor C.J. Rieg, at right, stands to object to Keck’s question during trial for Rontarus Washington Jr. on Sept. 24, 2019 in Douglas County District Court. Seated at Keck’s left is Washington’s other defense attorney, Adam Hall.

A few days into the investigation, he said, he sprayed an agent called leucocrystal violet in the third-floor hallway. When the aerosol mist hits blood, it turns purple, Thomas testified. From the door of No. 13 leading toward the opposite end of the hallway, the mist turned a pattern of spots that could be footprints a darker black color.

Thomas said he tested a few of the spots near No. 13 with Hemosticks, test strips that indicate the presence of hemoglobin, a blood protein. The spots he tested were negative for blood, he said.

The jury trial is scheduled to last through at least Friday. It will resume Wednesday morning with further testimony from Thomas.