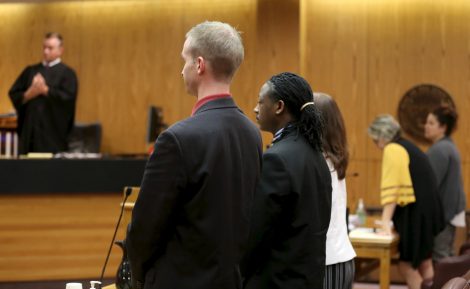 After a second full day of deliberation — bringing their total to about 15 hours since they started Tuesday — jurors considering a verdict in a Lawrence murder trial had not come to a conclusion by 5 p.m. Thursday.

On one count with which Rontarus Washington Jr. is charged, it seems the devil may be in the details. On the other, jurors might not be able to come to a unanimous decision.

Washington, 23, faces charges of first-degree murder and aggravated burglary in connection with the Nov. 7, 2014 death of Justina Altamirano Mosso. He is charged in the alternative with first-degree felony murder. He has been in custody for nearly four years and nine months awaiting a trial that has been repeatedly delayed because of various complications.

Jurors have been instructed to also consider the lesser charges of second-degree murder and burglary. They are also to consider each charge independently from the others, Douglas County District Court Judge James McCabria told them.

Mosso was 19 years old when she was bludgeoned and stabbed to death in the bathroom of the studio apartment she had shared with her husband, Felipe Cantu Ruiz, at Lawrence’s Cedarwood Apartments, 1727 W. 24th St. Washington lived on the opposite side of the building’s third floor.

Prosecutor C.J. Rieg has alleged that Washington was in Mosso’s apartment when he shouldn’t have been, hoping to steal property or money. She said he grabbed a toilet tank lid, bashed Mosso twice on the head and then used a knife to finish the job.

Washington’s defense attorneys, Angela Keck and Adam Hall, focused much of the defense on Mosso’s bad relationship with her husband. During the trial, Cantu Ruiz said that Mosso had frequently been unfaithful, and her friend testified that there had been instances of domestic violence in the relationship.

Jurors sent McCabria a question just before 4 p.m. Thursday, and another just before the end of the day.

The first said that after the past two days of deliberations, there is a “small minority” of jurors whose verdicts can’t be changed regarding count 1, murder. There was no indication of how the majority is leaning.

The presiding juror told the judge he believed they would be able to come to a verdict on the second count, aggravated burglary. They opted to continue deliberating until 5 p.m., and with just a few minutes left in the day, they submitted another question: If a burglary occurs in an unoccupied dwelling and then someone walks in, does it become an aggravated burglary? They referenced a specific stipulation of the instructions they were given.

In discussion before the jury came back into the courtroom, Rieg said the answer is “yes”; Keck said the defense would object to telling the jury the answer was “yes.”

The charging document in the case, which McCabria reread outside the presence of the jury, alleges that Washington “did then and there unlawfully, feloniously, and without authority enter into, or remain within” a dwelling “in which there is a human being.”

According to the jury instructions, for an aggravated burglary conviction, the state must have proved beyond a reasonable doubt that the defendant entered a dwelling without authorization intending to commit theft, and that “at the time there was a human being in the dwelling.” Later, the instructions clarify that the human being must be living.

A lesser charge of burglary, however, indicates that no person was present in the dwelling when the defendant entered.

Depending on their theory, the jurors’ interpretation of the instructions would influence whether they were able to agree on a conviction of aggravated burglary or burglary, or neither.

McCabria said he planned to tell the jurors to follow the instructions as they received them. He did not directly answer their question with a “yes” or “no.” 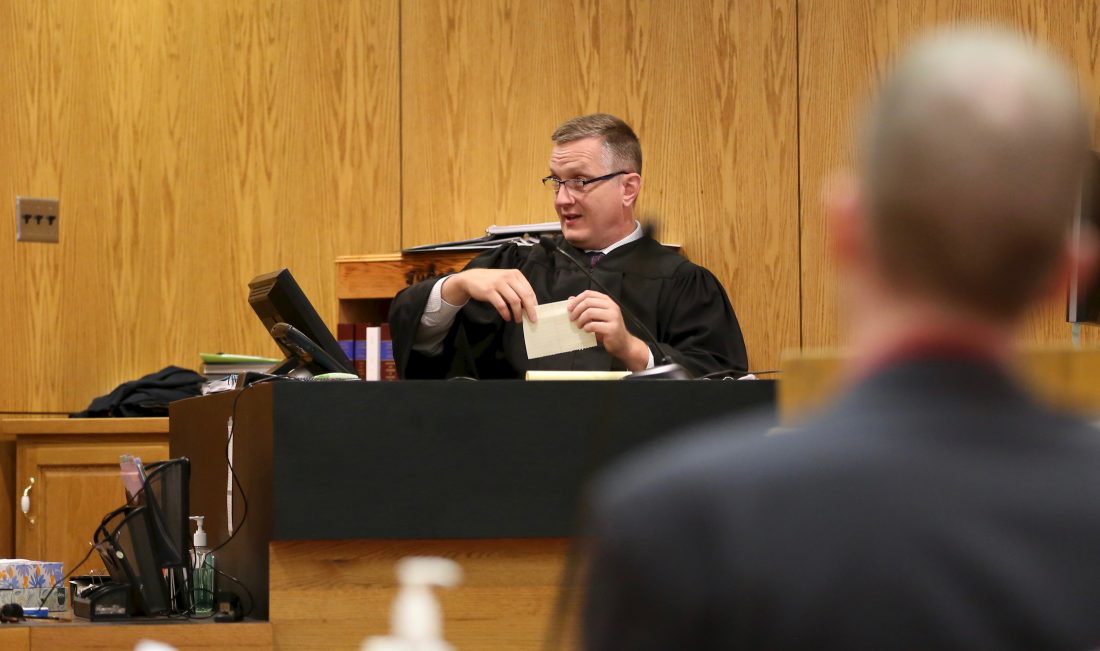 Douglas County District Court Judge James McCabria looks to the bailiff to return an answer to the jurors during trial for Rontarus Washington Jr. on Thursday, Oct. 3, 2019.

McCabria recessed for the day prior to addressing count 1. The jurors will return Friday morning.

If the jurors have a single reasonable doubt regarding a specific charge, they must find the defendant not guilty on that charge, McCabria has instructed them.

Jury selection was a particular challenge in the case because the trial was expected to take so long. Many potential jurors said the three-week trial — which was scheduled to wrap up Friday, Sept. 27 — would create significant hardship for them.

At the end of the afternoon Wednesday, Sept. 11, however, 15 jurors — 12 to deliberate and three alternates who were not informed of their status until they had already heard all testimony and closing arguments — were sworn. The eight men and seven women represent a range of ages and a mix of races and ethnicities.

Jurors heard closing arguments, then began to deliberate just before 4 p.m. Tuesday. They continued through all of Wednesday and Thursday. Friday will mark four full weeks of trial.

Thursday morning, the jurors asked to see the photos from phone dumps that had been admitted into evidence. The photos were on a disc that was admitted during trial, but the evidence tape was not broken on its package. They wanted to ensure they did not view any exhibits that had not been admitted.

McCabria instructed them that they do not have any exhibits that have not been admitted, and they may examine the ones they have in any way that they see fit.

Washington was not brought into the courtroom for that exchange, and Hall objected, saying that he deserves an entirely public trial, even though the question was procedural in nature.

McCabria asked Rieg for her thoughts, and she said the defendant must be present anytime the judge addresses the jury, and this was answering the jury’s question. McCabria said the caution was appropriate, and Washington was then brought into the courtroom briefly to be informed of the jurors’ questions and judge’s answers.