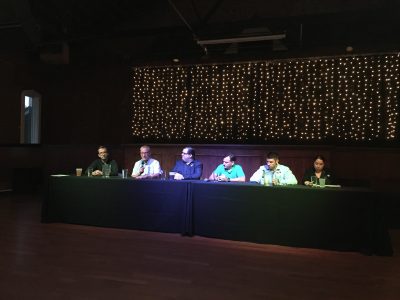 Lawrence City Commission candidates participate in a forum on Sept. 26, 2019.

At a forum Thursday evening, Lawrence City Commission candidates discussed several issues affecting downtown Lawrence, including what they would do to support downtown businesses. Two candidates said they would support some form of a vacancy tax.

Downtown Lawrence Inc. hosted the forum at Abe & Jake’s Landing, and Sally Zogry, the organization’s director, moderated. Zogry asked the six candidates various questions that the board came up with, and each candidate had two minutes to respond.

Zogry said the downtown is primarily made up of small businesses, which often struggle under the pressure of factors outside of their control, like high lease rates, high real estate taxes, and negative public sentiment regarding downtown safety and parking. She asked the candidates what they would do at a policy level to support small businesses downtown and ensure they can remain viable in the face of those challenges.

Brad Finkeldei said the focus needs to be on safety and the perception that there are safety issues. He said he thinks the city should look at the possibility of funding a full-time Bert Nash employee to work with homeless people downtown and ensure they are being adequately helped. He said it was also important to look at the number of people living downtown and other ways to bring people downtown.

Rob Sands said he looked at data on employer growth in Kansas over the past 40 years and found that small businesses are the ones that create the most jobs overall. Despite that, Sands said he consistently hears that dealing with the city is a headache for businesses. He said he thinks there should be someone on the city staff who serves as a concierge and helps walk businesses through city application processes. He also said the city needs to make sure there is accessible parking downtown for disabled and elderly people.

Courtney Shipley said there are a lot of perceptions in the community regarding downtown parking, and the city needs to be sure to listen to the perspectives of downtown businesses when those conversations are had. She said the city also needs to continue to support the small business development center and that she would be interested in seeing more business incubators or popups to provide jumping-off points for businesses.

Joey Hentzler said he thinks in addition to addressing downtown parking, the city could modify its bus routes to make it easier for people to get downtown. He also said that a significant amount of downtown properties are under common ownership or owned by nonlocals. He said the city should follow the example of other cities and limit speculation by fining property owners who let buildings sit vacant or who charge exorbitant rents.

Stuart Boley said he thinks supporting downtown planning efforts and making sure police have a downtown foot patrol are both priorities. He also said that addressing mental health is key to addressing homelessness, and that the city needs to have discussions with Douglas County leaders to ensure the governments have the appropriate responsibilities regarding mental health clearly designated.

Ken Easthouse said he thought the current economic incentive policies have a gap because most incentives are either geared toward start-up businesses or larger businesses, and there should be incentives for businesses in the middle. Similar to Hentzler, Easthouse said there should be a vacancy tax for commercial properties that remain underdeveloped. Specifically, he said a higher property tax rate for vacant buildings that continues to increase as long as a property remains vacant would encourage property owners to lease them or otherwise utilize them. He said such a policy would have the added effect of reducing downtown rents.