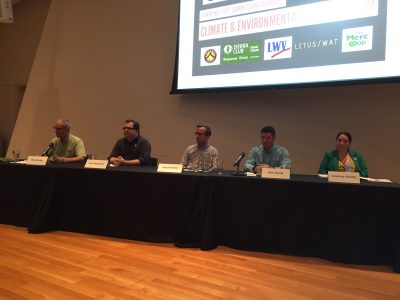 Lawrence City Commission candidates discuss climate change and other environmental issues at a forum Oct. 2, 2019 at the Lied Center.

The forum at the University of Kansas’ Lied Center was moderated by KU Public Affairs and Administration associate professor Shannon Portillo, who is also assistant vice chancellor of undergraduate programs at the Edwards Campus, and graduate student Matt Dunn, who is president of the Sunrise Movement of Lawrence. The moderators asked the candidates several questions about climate issues, after which the candidates responded to questions from the audience.

“That’s going to require that we think less about the bottom line and more about the long-term effects of not addressing these things right now,” Shipley said.

Rob Sands said the role of local government in addressing climate change was to provide leadership. He said sometimes that would mean taking a more upfront role and sometimes it would mean partnering with experts in the field. Sands said he thought Kansas case law on climate issues was not as hard and fast as some think it is, and that the city should make itself heard in state government and in the courts.

“I think we have an opportunity in some areas to press the state to act or to press the Supreme Court to make a decision,” Sands said.

“What we can do at the local level is take care of each other,” Hentzler said.

Ken Easthouse said the city needed to look at its stormwater management and to make sure its urban green spaces were protected. In addition, he said he would like to expand the tax breaks offered through the Neighborhood Revitalization Act to cover energy-efficient improvements to individual homes, including the addition of solar arrays.

“That could be significant in terms of how much renewable energy generation that we can do within the city itself, and in terms of mitigating those costs to the individual homeowners,” Easthouse said.

Stuart Boley, the only incumbent candidate, said the city’s new comprehensive plan, which the commission approved Tuesday, was a step forward, but that more needed to be done. Boley said the environmental sustainability policies in the new plan were robust and that prioritizing infill development would also be important for sustainability.

“Deciding that we would make infill development more of a priority, so that we can develop within the existing footprint rather than sprawling farther into the county, I think that’s a very significant decision that we just did last night,” Boley said.

Brad Finkeldei was attending a national health conference and was not able to attend the forum, but he submitted a recording. In it, he said that when trying to make progress on climate change, gathering data would have to be the city’s first step. He said the city needed to look at data, make a plan and follow that plan.