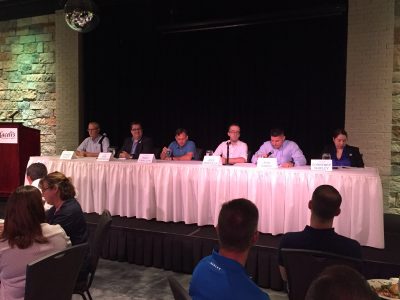 At a forum Wednesday, Lawrence City Commission candidates discussed several issues affecting the city, including proposed growth policies, economic incentives and what the city should do with excess savings in the future.

The Lawrence chamber of commerce hosted the forum at Maceli’s Banquet Hall, and Chamber Vice President Hugh Carter moderated. He asked the six candidates several questions, and each candidate had one minute to respond to each question.

Regarding a proposed new growth policy, Carter asked whether candidates felt the policy would help or hurt housing affordability in Lawrence.

The new comprehensive plan that’s being proposed for Lawrence and the unincorporated areas of Douglas County has a growth policy that prioritizes infill development and adds requirements for developers who want to expand the city’s boundaries. As currently proposed, the plan includes a requirement that developers provide some kind of community benefit if they want to annex land to expand the city. That idea has been controversial with some local business groups, including the chamber of commerce.

Ken Easthouse, a neighborhood leader and city board member, said he thought the policy was restrictive and would hurt the city’s affordable housing process. Easthouse said he thought it was basic supply and demand, and that if the city refused to expand its borders to accommodate growth it would get more projects like the Hub, a proposed downtown apartment and retail building that many residents opposed.

Joey Hentzler, a social advocate and community board member, said that while he remains open to learning more, the studies he’s seen indicate that growth never pays for itself. He said he thought the city needed to be smart about growth, and that encouraging density when possible would allow the city to focus its services more efficiently.

Brad Finkeldei, an attorney and nonprofit board member, said he also thought the policy would hurt affordable housing and that it needed further study. And Courtney Shipley, chair of the Lawrence Association of Neighborhoods, said she was grateful the chamber of commerce and other organizations had brought up issues with the policy.

Incumbent candidate Stuart Boley, a retired auditor and community volunteer, said that if the city were to develop in the same way it has developed in the past, then the plan would increase the cost of housing. However, he said the commission would have to bring a lot of ideas together, including the idea that allowing the city to expand its footprint would take a toll on the environment.

Carter also asked the candidates what role economic incentives should play in development and what the candidates would do if they had the opportunity to allocate the city’s excess savings. The Journal-World recently reported that the city has had to transfer a total of $5.4 million into other reserve funds over the past two years because more money was accumulating in its savings than policy calls for.

Regarding incentives, Boley and Finkeldei said they were interested in supporting entrepreneurship efforts and the continuation of the city’s Catalyst Program, which provides a fast-tracked incentives application and free land for businesses that want to build or expand in either of the city’s business parks. Finkeldei said he was supportive of incentives in general, saying that the economy itself made those rules as opposed to the city. Sands said the city should be looking at incentives to grow small businesses and encourage expansion, and that it also needed to consider that the cost of housing in Lawrence affects whether businesses want to locate in the city.

Shipley said there is a difference between an incentive and a reward, and she stressed that the city needed to be mindful about whether to give incentives to developments that would have happened anyway.

Easthouse said he opposed the Catalyst Program. He said he was concerned about the fast-tracked incentive process and what it would mean for the city in five to 10 years.

Hentzler said the city needed to do as much as it could to support downtown businesses. He also proposed that large projects and policy changes should have to undergo an analysis to determine what impact they would have on people of color.

Regarding what they would spend excess savings on, the majority of candidates said they would consider spending the money on one-time infrastructure needs, such as stormwater management. In addition to infrastructure projects, Shipley said the city could consider sustainability-related projects, and Boley said better accounting software should be considered. Hentzler said the city should invest in green energy to reduce its carbon emissions.