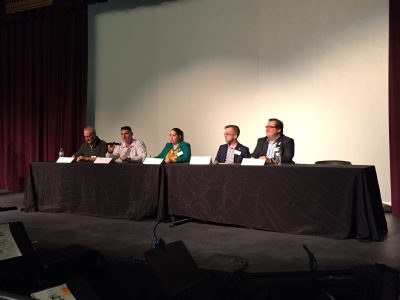 Lawrence City Commission candidates participate in a forum at the Lawrence Arts Center on Oct. 14, 2019.

The League of Women Voters of Lawrence/Douglas County hosted the forum, which took place at the Lawrence Arts Center, and League President Kristin Salmans moderated. The focus of the forum was nonprofit support, and Salmans said the questions were formulated by local nonprofit organizations and provided to the candidates ahead of the forum. Each candidate was given 90 seconds to answer.

Salmans noted that the Lawrence-Douglas County Health Department’s Health Equity Report indicates that black residents have significantly higher poverty rates than white residents, and she asked the candidates what steps they would take to address poverty rates and make Lawrence a more equitable city.

Rob Sands said that the main thing that can be done at City Hall is to adopt policies and make decisions that address the rising costs of housing for all segments of the community. He said that included addressing housing costs and utility rates and advocating to support small business creation. He also said the city needs to do its part to correct the poor lending practices and zoning restrictions of the past.

“Lawrence, as all other communities, has a part in that,” Sands said. “We’ve got to correct a lot of our history in order to bring certain parts of our community up to the same standard of living.”

Courtney Shipley said that in addition to compiling data for the Health Equity Report, the health department is an important access point for all low-income people and that the city needs to continue to work with its local partners, especially Douglas County, to provide stable funding for the health department. Shipley said the city also needs to focus on creating more higher paying jobs and ensuring that it scatters affordable housing throughout the city instead of focusing it in certain neighborhoods.

“We need to be very conscious and focus on being sure that we scatter affordable housing around to give people access to different neighborhoods, different opportunities, different schools,” Shipley said. “That really is the healthiest thing for people who are trying to move up.”

Joey Hentzler noted that the report also indicated that black residents and people who live in North and East Lawrence have shorter life expectances than the rest of the community. Hentzler said the city needs to recognize that is related to historic divestment in those sides of town and that to move forward the city needs to commit to using race as a lens in all project and policy decisions. He said he is advocating for a racial disparity impact note for all city projects and polices that will indicate how residents of color will be affected.

“If we don’t do that, we’re going to continue making policy in a colorblind way and exacerbating these racist structures at the core of our community,” Hentzler said.

Ken Easthouse said such issues are really the core of what it is to be in city government. Easthouse said that locally the city needs to ensure its affordable housing projects are spread through the entire city and work to increase economic opportunities. He said he would work specifically support small businesses.

“I have a proposal to increase our economic development proposals to target those small businesses, specifically, that put down roots in the community and are the source of job growth for our future,” Easthouse said.

Stuart Boley said that one thing the city does is use its special alcohol tax revenue to support programs such as the Boys and Girls Club, which provides afterschool and summer programs for children and teens. Boley, who supports reviewing city-county funding agreements, noted that the health department is supported by both county and city tax revenue. He said that means that people within the city, because they pay both city and county taxes, essentially pay twice for that service.

Salmans said that Brad Finkeldei was not able to attend the forum because he had a longstanding commitment in Denver that could not be rescheduled. Finkeldei, who has worked with several local nonprofit organizations, sent a statement saying nonprofits help create a healthier and more just city and that the city should support those services.