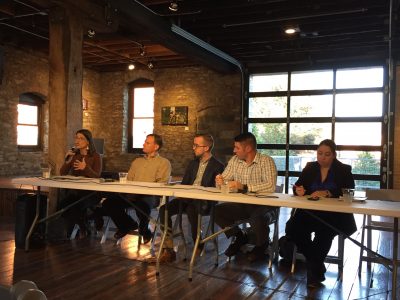 At a forum on housing issues, Lawrence City Commission candidates shared their policy priorities as well as broader proposals to move the needle on the city’s affordable housing shortage.

The United Way of Douglas County, Tenants to Homeowners and the People’s Owned and Operated Collective Housing, as well as other community partners, organized the event. University of Kansas School of Social Welfare Associate Professor Melinda Lewis moderated the forum, which took place Tuesday evening at the Cider Gallery.

Lewis asked the candidates several questions, including some submitted by the audience, and each candidate had two minutes to respond. She began by asking the candidates their top two priorities to ensure the city’s housing market meets current and future needs. She later asked how the city could use other levers — such as business development and transportation — to address affordable housing.

Courtney Shipley said her top two priorities would be improving the city’s rental inspection program and effectively implementing the new comprehensive plan, Plan 2040. She said that when the city updates its code to align with the plan, it will need to take into account economic development, geography, green space, sensitive lands and many other components that affect the affordability of housing.

Regarding other policies that affect housing, Shipley said she opposed the city’s current practice of making property owners pay to repair sidewalks adjacent to their property, which she said would hurt homeowners with low and fixed incomes and make rents go up. She also said the results of the federal opportunity zones tax incentive program are hard to predict and that the city should create its own opportunity zone fund to locally create and direct those projects.

Rob Sands said he’d like to address the city’s declining residential lot inventory by mildly increasing density in certain neighborhoods, and he also suggested reevaluating a provision in Plan 2040 that requires developments that would expand the city’s boundaries to provide a community benefit. He said the requirement is too vague for the city and people who build homes.

Regarding other policies that affect housing, Sands said he would want to address landlords discriminating against potential tenants who hope to use housing vouchers to help pay their rent. He also said transit routes could be more flexible, perhaps including some smaller buses and some demand-based ride-hailing services akin to Uber and Lyft.

Joey Hentzler said his top two priorities would be to strengthen the city’s rental inspection program, supporting the needs of tenants with negligent landlords, and to increase the percentage of the city’s housing that is designated as permanently affordable. He said he wants to break with the for-profit motive for providing housing and is not interested in giving developers tax incentives for temporarily making a unit affordable.

Regarding other policies that affect housing, Hentzler noted high city utility bills and said the city should have a progressive utility rate structure that charges higher rates to people who use the most water, such as those who water their lawns. He also said that to decrease utility bills for low- and middle-income people, the city should expand its weatherization grant program and provide a loan program that allows homeowners to increase their homes’ energy efficiency.

Brad Finkeldei said his top two priorities would be to increase density within the city in a way that works for everybody and to more effectively handle the affordable housing sales tax funds. He said the city should propose and lead affordable housing projects itself instead of requesting outside proposals.

Regarding other policies that affect housing, Finkeldei said the city needs to work with other entities, such as nonprofit organizations, developers and housing cooperatives, to develop affordable housing on a much larger scale than just one or two units at a time. He said the city could also try to build such projects on land it owns, or on land owned by other governing entities such as the school district.

The forum conflicted with a community meeting on federal opportunity zones, and two candidates, Ken Easthouse and incumbent Stuart Boley, attended that meeting instead of the forum. Boley and Easthouse instead submitted written statements.

In his statement, Easthouse wrote that the city should tackle affordable housing issues on multiple fronts: property values, rent rates, utility costs and the city’s rental inspection program. He also said the city will continue to see population growth, and it needs to address policies that have artificially inflated land prices.

Boley wrote that he had supported funding for affordable housing programs in numerous instances during his four years on the commission. Going forward, he said the city should continue using its affordable housing sales tax fund, but that it should also learn more about ways for philanthropic donors and nonprofits to get involved.