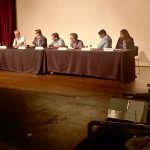 All of the candidates in this year’s Lawrence City Commission race except for incumbent Stuart Boley expressed opposition to recreation center entrance fees and the city’s current sidewalk repair ordinance at a forum on Saturday.

The three candidates receiving the most votes in the Nov. 5 general election will win seats on the City Commission, with the top two vote winners receiving four-year terms and the third-place winner receiving a two-year term.

The forum came two days after City Manager Tom Markus presented his recommended 2020 budget, which would raise the city’s mill levy by 0.5 mills and increase residents’ total utility bills by about 6.7%. Also, to help close a $675,000 budget gap in the Lawrence Parks and Recreation Department, the budget calls for entrance fees at the city’s recreation centers and would close the downtown Community Building on 11th Street for drop-in recreational use.

The candidates were mostly silent about the proposed mill levy increase, but all of them voiced support for the across-the-board raises for city employees that were included in the budget.

“We raised money for art with a tax on development projects,” he said. “We could do it on other issues as well.”

As for the proposed utility rate increases, Boley, the only one of the six candidates who will actually vote on the 2020 budget, said infrastructure needs drove the recommended utility rate increase. He cited a recent water line break near New York Street as an example of the problems the city has to address.

“(With) the water main break, we have people under a ‘boil your water’ order,” he said. “We have serious problems we have to deal with. It doesn’t get any more basic than that.”

Boley was at odds with the other candidates about the city’s ordinance that requires property owners to repair sidewalks adjacent to their properties. He said the city’s hands were tied on this issue. By state statute, property owners have been responsible for sidewalk maintenance since 1933, he said.

The other candidates all said they opposed the city’s current ordinance, with Easthouse making his opposition known even before the issue was put to the candidates as a question.

“The one thing I would highlight is that sidewalks need to be funded by the city,” he said when asked about the proposed 2020 budget.

Hentzler said the entry fees would create equity issues, while Easthouse said that when Rock Chalk Park was proposed, residents were promised that it would be free for the community to use.

Shipley was concerned by the proposal in the Parks and Recreation budget to close the Community Building for drop-in use. The Community Building, which houses a basketball court and weight room, is the biggest indoor recreational facility available to East Lawrence residents, Shipley said.

“I’ve never (gone) in there and not seen a group of kids playing basketball,” she said. “We’re talking about closing the largest recreation center on the east side.”

The candidates were also divided on the issue of the Lawrence Community Shelter.

Boley was alone in opposing city funding for the shelter. By state statute, it was the county’s responsibility to provide housing to the homeless, he said.

Although the five other candidates were in favor of city funding for the shelter, some proposed caveats. Easthouse said the city should have a voice in hiring the shelter’s executive director in an effort to stabilize the position, which has been through four hires since longtime shelter leader Loring Henderson retired in May 2014. And Finkeldei said the shelter should be considered with other housing needs that could be supported through the city’s affordable housing trust fund.

“Using the affordable housing trust fund, the city should focus on bringing the county and nonprofit organizations together and being a leader in that issue,” he said. “The solution is not easy. The solution is going to take multiple years.”

This article has been corrected to accurately report the length of city commission terms.