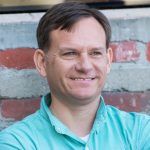 As a longtime volunteer with local social service organizations, Brad Finkeldei has seen the struggles of Lawrence residents firsthand, and he doesn’t think he’s alone in wanting the city to do more to help.

“Certainly the city has to fund its core services, but, beyond that, where does this city fall in helping those in need and raising people up?” Finkeldei said. “And I think when you look at the last couple votes that have been taken, with the mental health tax, the transit tax, and the affordable housing tax, the citizens of Lawrence have said we are willing to spend money in those areas.”

Finkeldei, one of six candidates running for City Commission, said it was largely his nonprofit work that motivated him to join the commission. Finkeldei, 46, has been on the board of Ballard Community Services for the past 18 years and the board of Lawrence Family Promise for the past nine years.

Finkeldei said that for him social services are core city services, and he thinks that the majority of Lawrence residents believe that as well. He said he thought the city could ultimately save money overall by better addressing those issues more directly, through services such as the Bert Nash Community Mental Health Center or the Lawrence-Douglas County Health Department.

“It seems like we’ve gotten away from that the last couple years,” Finkeldei said. “But to me, helping those in need is not only the right thing to do, but I think when you look at the costs — the cost of the jail, the cost of policing, the cost of city services to support that — it also makes fiscal sense to address those issues head on.”

Another area where Finkeldei said the city could play a larger role was with affordable housing. Lawrence voters approved a sales tax in 2017 that will provide about $1 million annually to the city’s affordable housing fund for the next 10 years, and funds from the sales tax started coming in this year.

Finkeldei said he’s been disappointed in the current method of distributing funding, in which the Affordable Housing Advisory Board receives applications for potential projects and then makes a recommendation to the commission. He said the city could only do so much when it’s sitting back and letting developers and other organizations drive the process.

“I think the City Commission and the city itself, if it’s going to make real progress on affordable housing, has to lead the process,” Finkeldei said. “(The city) has to tell people, this is what we want to do, this is how we want to do it — we have some money to do it with, come join us, come partner with us.”

That mindset also ties into another issue of concern for Finkeldei. He said it seemed that over the last few years many nonprofit organizations, businesses, neighborhoods and individuals have seen the city as more of an adversary than a partner. He said the city needed to have a clearer vision of what it wants and then actively work with others to accomplish that.

“People don’t seem to feel like, if you come to the city, they’re going to help you accomplish something,” Finkeldei said. “You see them as the barrier to keep you from doing something. And I think the city needs to partner with people.”

Finkeldei served on the Lawrence-Douglas County Metropolitan Planning Commission from 2006 to 2012 and was the commission’s chair in 2008. He also served a year on the city’s Joint Economic Development Council and was a member of the Lawrence alcohol tax fund committee from 2005 to 2009.

A native of Wichita, he graduated from the University of Kansas law school and has lived in Lawrence permanently since 2000. He is an attorney with Stevens & Brand law firm, where he focuses on litigation, banking and governmental law.

The seats of Commissioners Stuart Boley, Leslie Soden and Matthew Herbert are up for election this year, and both Soden and Herbert have announced they will not seek reelection. The general election will be Tuesday, Nov. 5.