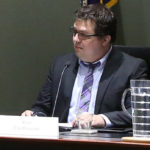 Lawrence resident Ken Easthouse sits before a citizen advisory board assembled to review candidates for a vacant City Commission seat, Friday, Sept. 24, 2015, at City Hall. Easthouse is currently running for a seat on the commission.

Having grown up in Lawrence, Ken Easthouse said he did not shy away from a healthy debate when it came to local issues.

“We have a spirit in Lawrence that loves to debate, and everyone has their own pet issue that they love to talk about, and that’s one of the things that makes Lawrence great,” Easthouse said. “And we need people who understand that spirit in our leadership, because we have to have that debate in order to thrive as a city.”

Easthouse, one of six candidates running for City Commission, said that’s part of what motivates him to be part of the commission. He said he wanted to make sure that commissioners fully debated issues that residents care about as opposed to city staff essentially making those decisions. As an example, he noted Westar Energy’s wind energy offer last year, which wasn’t brought to the commission until after a member of the public asked about it and it was too late for the city to take part in that particular agreement.

In July 2018, Westar announced that it would allow some of its large-demand customers, including Lawrence, to purchase wind energy at a fixed rate for the next 20 years. Lawrence — which operates dozens of buildings, as well as multiple water treatment facilities, sewer plants and pump stations — was not among the municipalities, universities and other entities that took Westar up on the offer.

“Not to say that there aren’t good people working in the city; however, I do think that sometimes they push the boundary of what is appropriate for city staff to do versus what is appropriate for the City Commission to do,” Easthouse said. “And while you have to develop those relationships with those folks, you also can’t be afraid to take a step back and say, ‘No, this is what I was elected to do.'”

Easthouse, 36, has been active in local government the past several years and ran unsuccessfully for the commission in 2017. Easthouse is a member of the Public Incentives Review Committee and president of the Prairie Park Neighborhood Association.

That local debates be comprehensive is also key for Easthouse. He said the commission needed to make sure the city’s policies weren’t working against one another. For example, he said he thought the proposed annexation limitations in Plan 2040, meant to prioritize infill development, worked against the historic preservation efforts as well as the city’s goal to increase the availability of affordable housing. He said he understood the environmental and infrastructure concerns when it came to expanding the city’s boundaries but that policies needed to be balanced.

“At the same time, we don’t want to artificially restrict ourselves, because that just drives property values up,” Easthouse said.

Easthouse said he would also like to see changes in the city’s funding agreements with Douglas County and the city’s ordinance for handling sidewalk repairs.

Easthouse said that the city needed to work with the county to rebalance the funding agreements between the two local governing bodies. The city and county partner to provide several services, including the emergency dispatch center; fire and medical response; and the health department. Easthouse said that when it came to financing those shared services, the amount of money contributed by City of Lawrence taxpayers significantly exceeded the amount contributed by those who live in rural Douglas County.

“We really need to rebalance that so more of it falls onto the shoulders of county taxes as opposed to city taxes,” Easthouse said.

Regarding sidewalks, Easthouse said he thought that sidewalks should be considered city infrastructure and that the city should pay to maintain them. He said rebalancing the tax structure between the city and county could help provide additional funding that would enable the city to take on that responsibility.

The city has had an ordinance on the books for decades stating that property owners are responsible for sidewalk repairs, but until this year it was only lightly enforced, and the city says there are now millions of dollars of repairs that need to be made. The city began enforcing the ordinance this year.

Easthouse graduated from Lawrence High School and Emporia State University, where he earned a bachelor’s degree in management with a minor in journalism. He formerly worked as a supervisor at a local call center, Maximus. Easthouse said he’s not currently in the workforce but rather is focusing on the campaign.

The seats of commissioners Stuart Boley, Leslie Soden and Matthew Herbert are up for election this year, and both Soden and Herbert have announced they will not seek reelection. The general election will be Tuesday, Nov. 5.