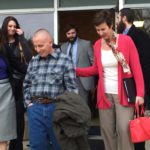 Topeka ? A new measure in the Kansas Legislature that would allow compensation for those wrongfully convicted of crimes was inspired by the case of a man who spent several years in prison for a murder he didn’t commit.

Rep. Ramon Gonzalez, R-Perry, presented draft legislation Thursday to the House Committee on Corrections and Juvenile Justice, The Topeka Capital-Journal reported. The measure doesn’t have a bill number and hearings on the measure haven’t been scheduled.

Gonzalez, who is a police chief in Perry, also works as a special prosecutor for the Jefferson County Sheriff’s Office and spent several months reopening an investigation into the 1999 murder of Camille Arfmann in Oskaloosa.

Floyd Bledsoe spent 16 years in prison for Arfmann’s murder but had his convictions vacated by a Jefferson County judge on Dec. 8, 2015. Gonzalez testified at the hearing that he had been unable to find any evidence linking Bledsoe to the crime. Bledsoe has said he and his attorneys were weighing options on legal action seeking compensation.

Gonzalez said he wasn’t aware Kansas didn’t have a compensation statute. He said 30 other states and the District of Columbia and federal government provide for compensation.

“The purpose of the draft legislation was to just get the conversation going,” Gonzalez said.

Several details in the Gonzalez legislation still need to be worked out in committee. For example, Gonzalez said his bill doesn’t define “exoneree” or set limits on the amount of money they may receive.

“We can’t make it a blank dollar amount, we must be specific,” Gonzalez said. “Hopefully we’ll get something going.”

Corrections Committee Chairman Rep. John Rubin, R-Shawnee, plans to hold hearings on the matter if the bill remains in his committee.

Tricia Bushnell, legal director of the Midwest Innocence Project, anticipates her group will have a chance to discuss the Gonzalez bill during committee hearings.