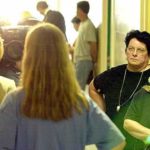 As her daughter, Heidi Bledsoe, speaks with the media in the hallway of Oskaloosas Jefferson County Courthouse, Tommie Sue Arfmann, second from right, listens. At right is Bledsoe's sister, Rose Anna Erhart. Bledsoes husband, Floyd S. Bledsoe, was sentenced to life in prison Friday for the November 1999 murder of 14-year-old Camille Arfmann.

Her other daughters have their doubts.

The Arfmann family is like the rest of this small town — there are about as many opinions as to how 14-year-old Camille Arfmann died as there are people to ask.

The mother was the only family member to speak Friday in court at Bledsoe’s sentencing.

“I think he should get life,” she told District Judge Gary Nafziger. “(Camille) got life, so should he.”

Later, she said she was unmoved by Bledsoe’s claim of innocence.

But Heidi Bledsoe — Floyd’s wife and Camille’s sister — thinks that, at best, the convicted man was just an accomplice.

“He couldn’t have done it on his own,” said Heidi Bledsoe, who has filed for divorce. “I think he knew before everybody else did, but I can’t see him pulling the trigger.”

“I think he was involved after the fact … that he’s taking the rap,” she said.

“This (murder) took a vicious person — it was a hateful crime — and that person is still walking the streets,” she said.

Unlike the mother, the young women believe there will be more story to tell. None of that, however, will bring back their sister and daughter.

“My life is just a shambles,” Tommie Sue Arfmann said. “How do you go to her room, or grave, or anything?”