Topeka ? Tom Bledsoe’s gun was used to kill Zetta “Camille” Arfmann, of Oskaloosa. His bullets, bought hours before her death, tore through Arfmann’s head and chest.

He confessed to the crime twice to his pastor, and once to police. He told law enforcement exactly where they could find Arfmann’s body — under piled trash and plywood on the property where he lived with his parents in rural Jefferson county. 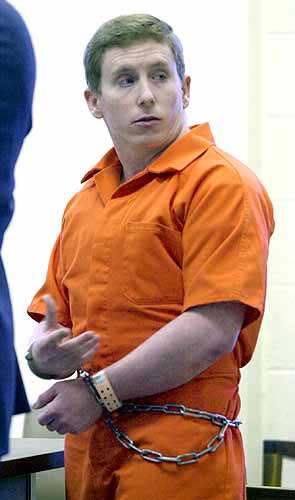 At his sentencing for the November 1999 murder of his sister-in-law, Camille Arfmann, Floyd S. Bledsoe, 23, gestures toward his wife, sister of his victim. Bledsoe was sentenced Friday in the Jefferson County Courthouse in Oskaloosa to life in prison for the crime.

But Tom Bledsoe is not in prison for the crime. His brother, Floyd Bledsoe, is.

Now, attorneys at KU’s Project for Innocence and the Midwest Innocence Project are asking a Jefferson County judge to reverse Floyd Bledsoe’s conviction and set him free in a motion filed Tuesday.

Bledsoe, 38, has been serving a life sentence for more than 15 years for the 1999 shooting death of Arfmann, his then-14-year-old sister-in-law.

He was convicted of first-degree murder, aggravated kidnapping and indecent liberties with a child after an April 2000 three-day trial, despite the lack of any physical evidence tying him to the crime. Jefferson County prosecutor Jim Vanderbilt presented just one witness, of 28 total, whose testimony directly linked Bledsoe to Arfmann’s murder — and that was Tom Bledsoe, who was originally charged with the crime after confessing and providing police with the murder weapon, according to Journal-World articles from the time.

Vanderbilt at the time claimed Floyd Bledsoe took the gun from Tom Bledsoe’s pickup truck to kill Arfmann before returning it to its place behind the truck seat. Tom Bledsoe then supposedly put the pistol in a drawer in his bedroom. His father turned the weapon over to police when Tom Bledsoe surrendered.

In September, the KU Project for Innocence received the results of long-sought DNA testing on swabs from Arfmann’s body and clothing, revealing that Tom Bledsoe’s DNA was consistent with semen found inside Arfmann and on one of her socks. It also showed that the Bledsoes’ father’s DNA was on one of Arfmann’s socks, consistent with coroner testimony that she was dragged to her gravesite by her ankles.

Vanderbilt never explained how or when Floyd Bledsoe might have taken, then returned, the gun. Incidentally, Vanderbilt gave up his county attorney position in 2003 after the Kansas Court of Appeals overturned another one of his convictions because he failed to file a brief in response to that defendant’s appeal, the Journal-World reported.

Professors at KU’s Project for Innocence took notice of Floyd Bledsoe’s case as soon as the verdict was rendered, said Elizabeth Cateforis, assistant clinical professor at KU. And in 2006, Floyd Bledsoe became one of their clients, with KU law students working on the appeals process and getting involved in investigations.

The group has been seeking additional DNA testing for the case for years. In 2012, a Jefferson County judge allowed the project to have DNA testing done, but it took more than two years to track down all the evidence from law enforcement and the Kansas Department of Investigations, said Project for Innocence Clinical Professor Jean Phillips.

Over that near decade, countless students have worked on Floyd Bledsoe’s case, Phillips said. Not only has the project aided Floyd Bledsoe, but it has allowed students to have hands-on experiences they otherwise may not have until they are out in the workforce.

“Students worked on a claim of actual innocence. They got to figure out how to investigate and find witnesses, and determine the evidence they need,” Cateforis said. “It’s a great way to see how criminal justice works, and doesn’t work.”

In 2008, the Project for Innocence even won Floyd Bledsoe a brief release from prison after a federal court decided he was denied his constitutional right of effective counsel. That decision was later overturned on appeal, however.

In addition to tracking down the evidence, Phillips said, about $30,000 in funding had to be raised to have the items tested. That testing was finally done this year with financing and assistance from the Midwest Innocence Project, a nonprofit corporation that works on litigation and exoneration of the wrongfully convicted in Kansas, Missouri, Arkansas, Iowa and Nebraska.

Cateforis and Phillips said the connection with the Midwest Innocence Project helped not only progress the case but also allowed additional resources for KU Project for Innocence students to do more than they could before.

“(The MIP) offered resources we didn’t have before,” Phillips said. “We need experts, and now we can tap into the Innocence Project network. Student connect to experts and learn how to bring those experts into the court.”

When the results came in September, Cateforis, Phillips, Alice White of the KU Project for Innocence and Tricia Bushnell from MIP got to work on the 33-page motion, filed Tuesday, to vacate Floyd Bledsoe’s conviction and release him from prison.

Phillips and Cateforis said they are in communication with the court and prosecutors to set a hearing date for the motion. At that point, the judge could either ask for evidence to be presented, to hear arguments or issue a ruling. If the judge declines to vacate Floyd Bledsoe’s conviction, Phillips and Cateforis said, they would appeal the decision.