High ceilings add to the feeling of a large space and leaves plenty of room for artwork in the living room at Marty Olson and Steve Fendt's home at 822 Maple St. in North Lawrence. Above Fendt, sitting at center, is a piece by Lawrence artist Roger Shimomura that is a portrait of Olson, who is sitting at left.

The unassuming ranch-style home doesn’t provide a clue to what visitors will find once they walk through the front door.

Guests enter into a brightly lit space in Steve Fendt and Marty Olson’s North Lawrence home at 822 Maple St., where at every turn objects and pops of color meet the eye.

Olson fell in love with the house the first time he walked through the door. It was the open floor plan, with a 17-foot-tall vaulted ceiling in the living room that attracted him.

The wood-frame contemporary ranch, with a brick facade exterior, was built in 2000 and had several owners before Olson and Fendt bought the house in 2013. 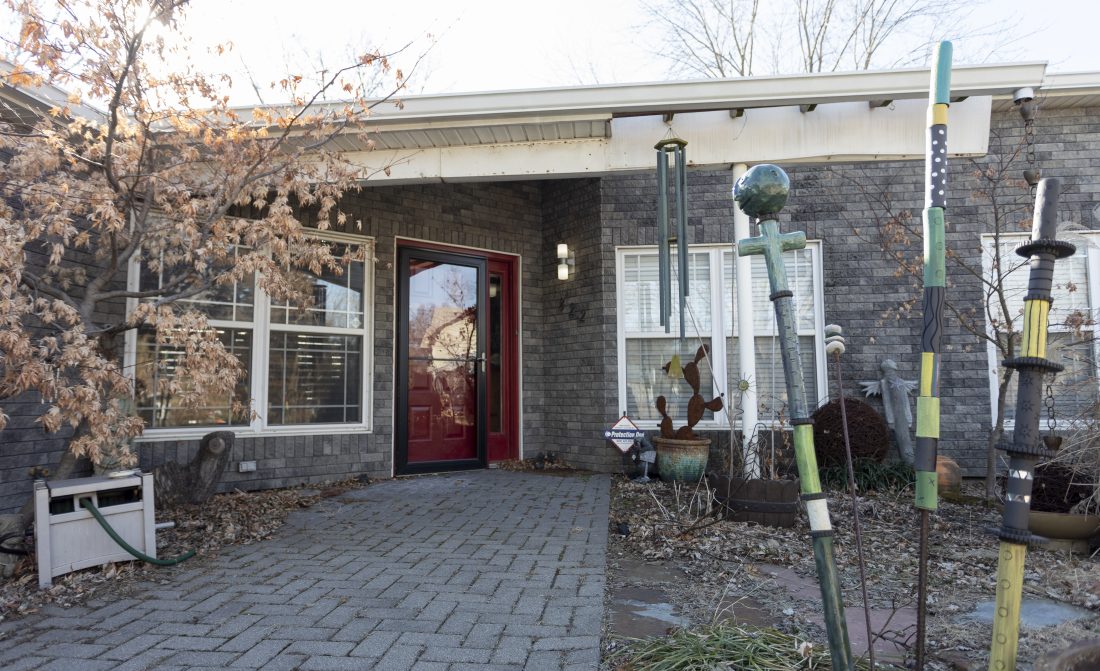 The front of Marty Olson and Steve Fendt’s home at 822 Maple St. in North Lawrence is pictured in February 2020.

Olson, an artist and hairstylist, has owned Do’s Deluxe for 44 years in Lawrence. The salon at 416 E. Ninth St. is also an art gallery where he has changing exhibits of local artwork every two months. There is also a studio where he paints when he isn’t cutting hair.

Back when Olson was house hunting, he was living in a 950-square-foot apartment in East Lawrence. At the time, he and Fendt were in a long-distance relationship. Fendt had just retired as the assistant director of the Tulsa Performing Arts Center and was planning to move in with Olson.

“My living room looked like a furniture showroom because everything was two-deep,” Olson said. It felt so cramped it was difficult to appreciate what he had. The new house had much more space than either had at the time.

“It came on the market four days before I looked at it. I knew I needed to jump on it,” he said. He asked Fendt to come to Lawrence that weekend.

As they house hunted they each had certain criteria for what they wanted. For Olson, 68, it was a home with no stairs.

“I wanted a basement for the tornados,” said Fendt, 64, who is the business manager of Theatre Lawrence. The house didn’t have a basement, but a safe room that works as well. Fendt also appreciated the open concept of the living, dining and kitchen area.

“We’re thrilled to have a house this big to display our art,” Olson said.

The high ceiling in the living room was perfect for hanging large paintings. Together they began blending their collections, including Fendt’s painting “The Dance” by Kevin Red Star and a portrait of Olson by nationally acclaimed Lawrence artist Roger Shimomura. 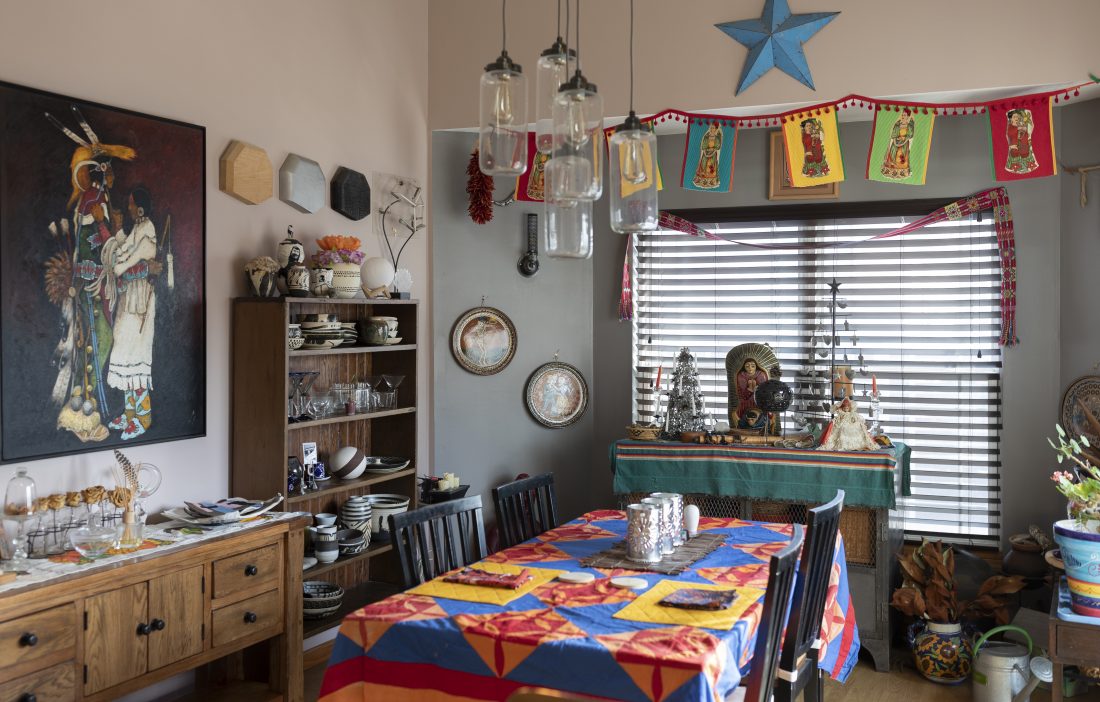 The Santa Fe style and art scene have been a huge influence for the couple, who make annual treks to New Mexico’s capital city, where they come home with more pieces. It’s also where they were married in 2014.

Olson always finds something in Santa Fe to suit his artistic tastes, which range from hand-crafted items to wire and metal sculptures.

“When it comes to collecting, I’m attracted to whatever makes my heart jump,” Olson said. 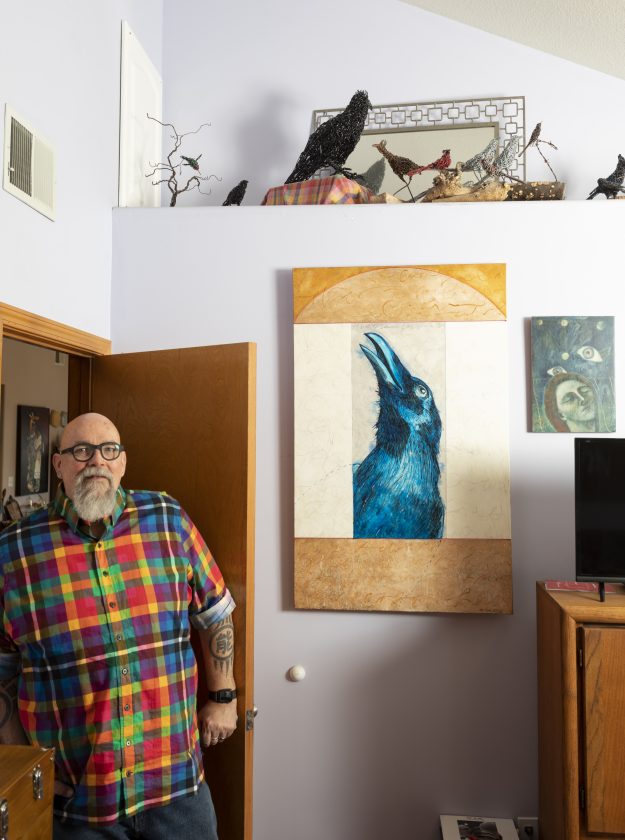 Marty Olson displays a collection of ravens and other birds, including a painting he created, in a bedroom at his house at 822 Maple St. in North Lawrence.

His collection includes wire sculptures of birds — roadrunners and cardinals, plus several ravens. In the master bedroom is a painting he did of a raven, looking up at a collection of wire birds by Santa Fe artist William Arnold.

As he explained which art attracts him, Olson pointed to a table with a collection of handcrafted objects. Included are several images of Our Lady of Guadalupe, the patron saint of Mexico.

“I am not that religious of a person, but I like iconography,” Olson said. 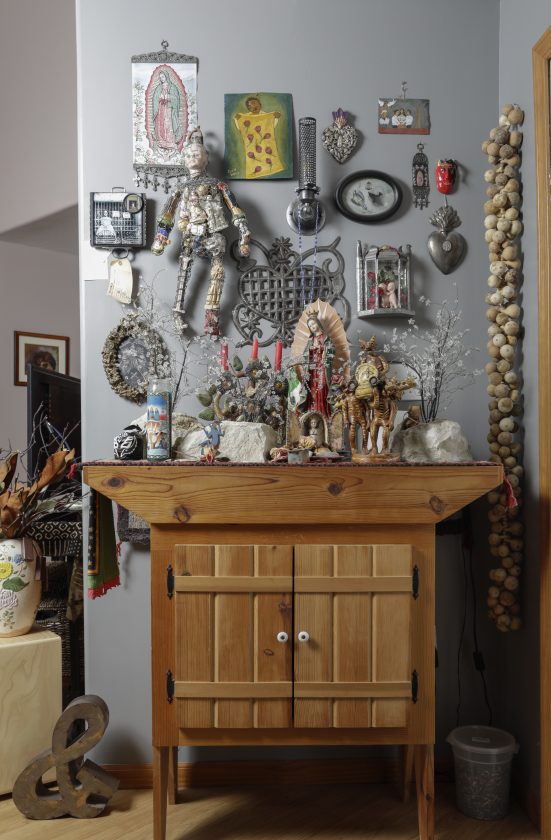 A collection of small fonts purchased on a trip to Spain hangs on a wall near the front door. Beneath it, commanding its own table, is a piece of functional art by Baldwin City artist Matt Kirby. It was created to display Olson’s pen collection. Its base sits on a large metal gear, from which several stacked cylinders rise holding two cases with glass lids to display the pens.

“This is what Matt came up with,” Olson said. “It has a steampunk style.” 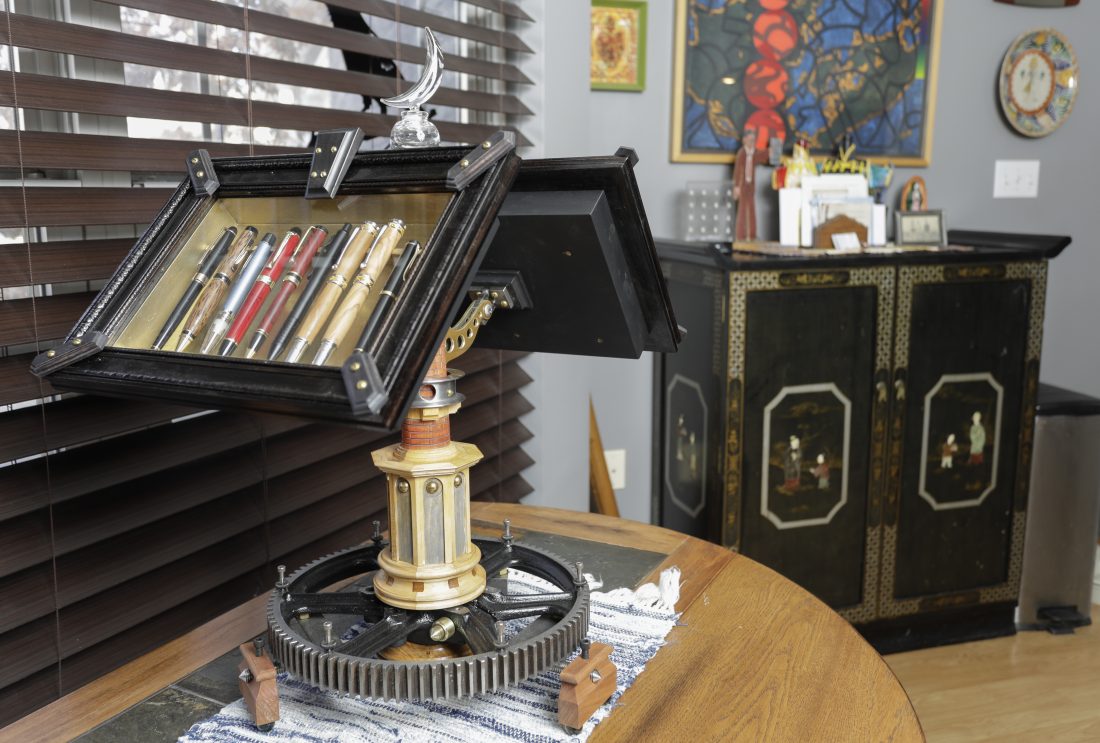 Part of Marty Olson’s art collection at his home at 822 Maple St. in North Lawrence is a piece by Matt Kirby, made to display a collection of pens.

In the dining room, there are two sideboards, one made of metal, the other wood. Shelves hold a collection of Lu Vaccaro’s functional black and white pottery. Vaccaro, a longtime Lawrence ceramic artist, passed away last fall. Many of the pieces in the home were done by friends of Olson and Fendt. 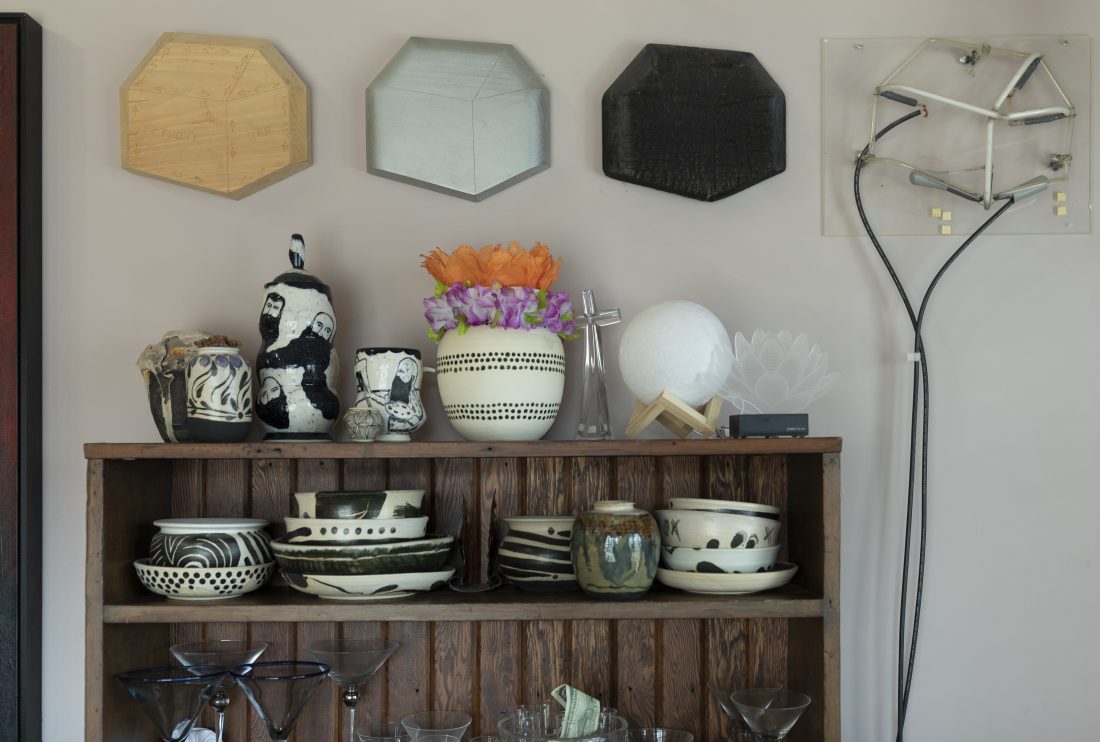 A cabinet of pottery and glass pieces in Marty Olson and Steve Fendt’s home at 822 Maple St. features, at top left, pieces by longtime Lawrence resident Lu Vaccaro, a friend of Olson’s.

The three-bedroom house was move-in ready. But, after living in it for the past six years, they have ideas for some improvements they hope to make in the future. They have talked about turning their backyard patio into a four-seasons room.

One of Olson’s favorite things about the house was the configuration of the front porch.

“Ironically the thing I fell in love with architecturally was the pergola, which is part of the porch roof. The beam is starting to warp and will need to be replaced,” Olson said.

It will be their first major remodel to the home they fell in love with at first sight. 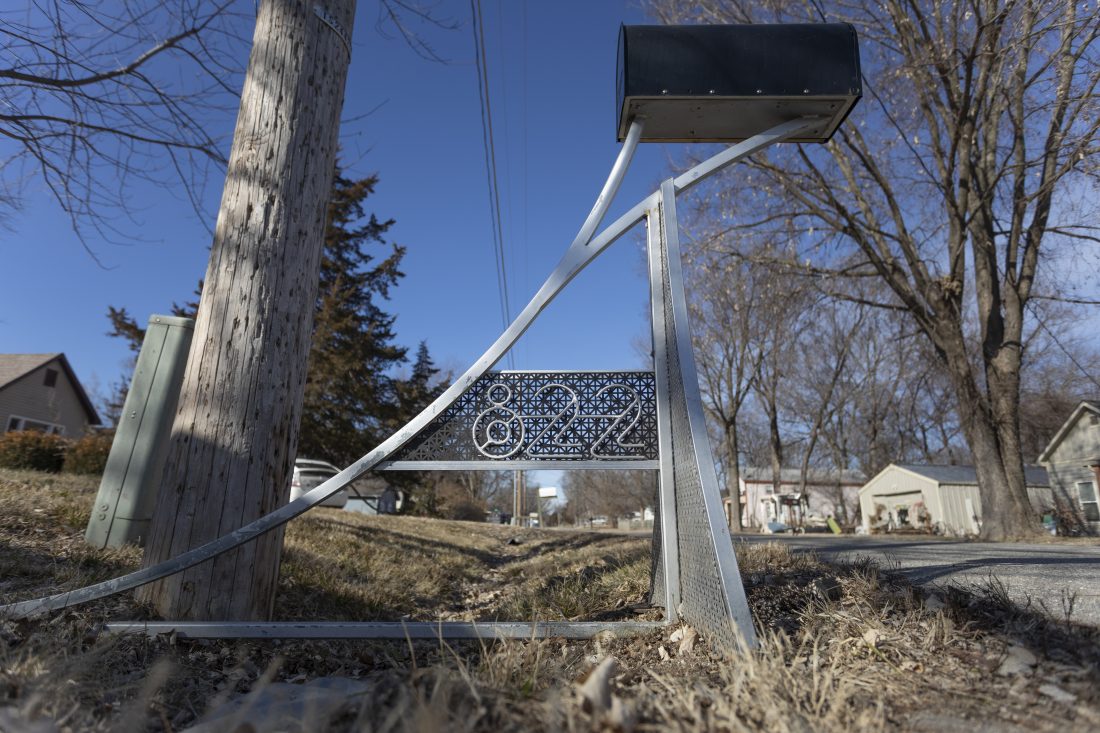 – Dec. 22 — A Lawrence house and its current owners weave their histories together

– Sept. 22 — Sharing a roof works for this mother and adult daughter

– June 16 — For Lawrence woman, 19th-century house started as money pit but evolved into ‘my world’

– Feb. 26 — Couple begin with a blank sheet of paper and end up with their dream house

Garden Variety: Tapping trees is easier than you might expect

Warmer temperatures and longer days mean that sap is beginning to flow in maples and other trees around the ...