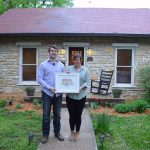 Warren Hays and Melody Stratton hold up a painting of their home, 1117 Connecticut St., on Tuesday, April 23, 2019. The painting was done by Meadowlark Ink.

Robert Sterling’s neat craftsmanship remained a selling point 146 years after he laid the stone for the small cottage at 1117 Connecticut St.

Warren Hays and Melody Stratton purchased the house in June 2015, after moving to Lawrence from the Washington, D.C., area for Stratton’s job at the University of Kansas.

The couple have been delving into the house’s past with the help of Monica Davis at the Watkins Museum of History.

Davis’ research uncovered an ad that Sterling placed in an 1883 edition of Lawrence’s Daily Kansas Herald, a local newspaper at the time. The small ad by Sterling, a 52-year-old Scotsman, described himself as “a contractor and builder of all kinds of brick and stone work done in the neatest and most substantial manner.”

From other documentation, they learned Sterling laid the stone for their home, which was built just 10 years after William Clarke Quantrill’s raiders pillaged and burned the East Lawrence neighborhood on Aug. 21, 1863. As Sterling was building the cottage, Lawrence was still recovering from the tragedy that left more than 180 people dead. By 1873 the town was experiencing a construction boom, according to “Nineteenth Century Houses in Lawrence Kansas,” a small book produced in the 1960s by the University of Kansas Museum of Art. 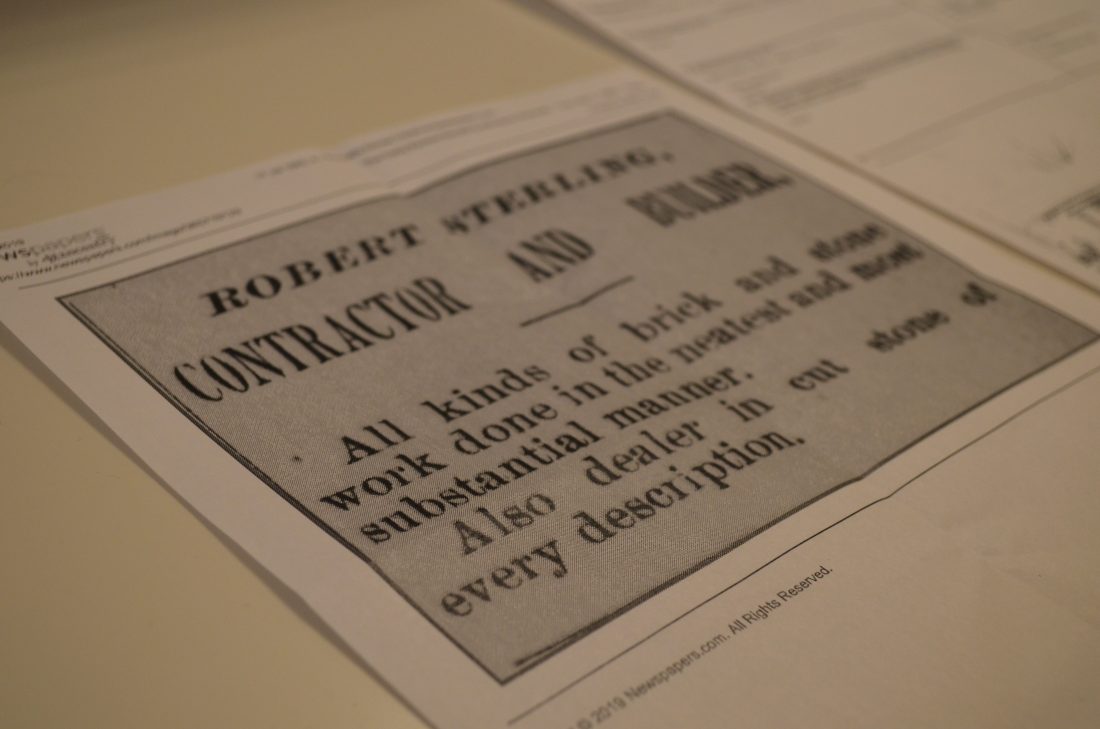 A 19th century newspaper clipping describes the builder of 1117 Connecticut St. The clipping reads, “Robert Sterling, contractor and builder, all kinds of brick and stone work done in the neatest and most substantial manner. Also dealer of cut stone of every description.”

The home’s craftsmanship is apparent as one steps into the uncluttered space with its 22-inch-thick stone walls, tall windows and hardwood floors. The house is a good example of what simple working-class homes of early Lawrence would have looked like, Hays said.

“Originally it was one room,” said Stratton, as she entered the master bedroom just off the living room. 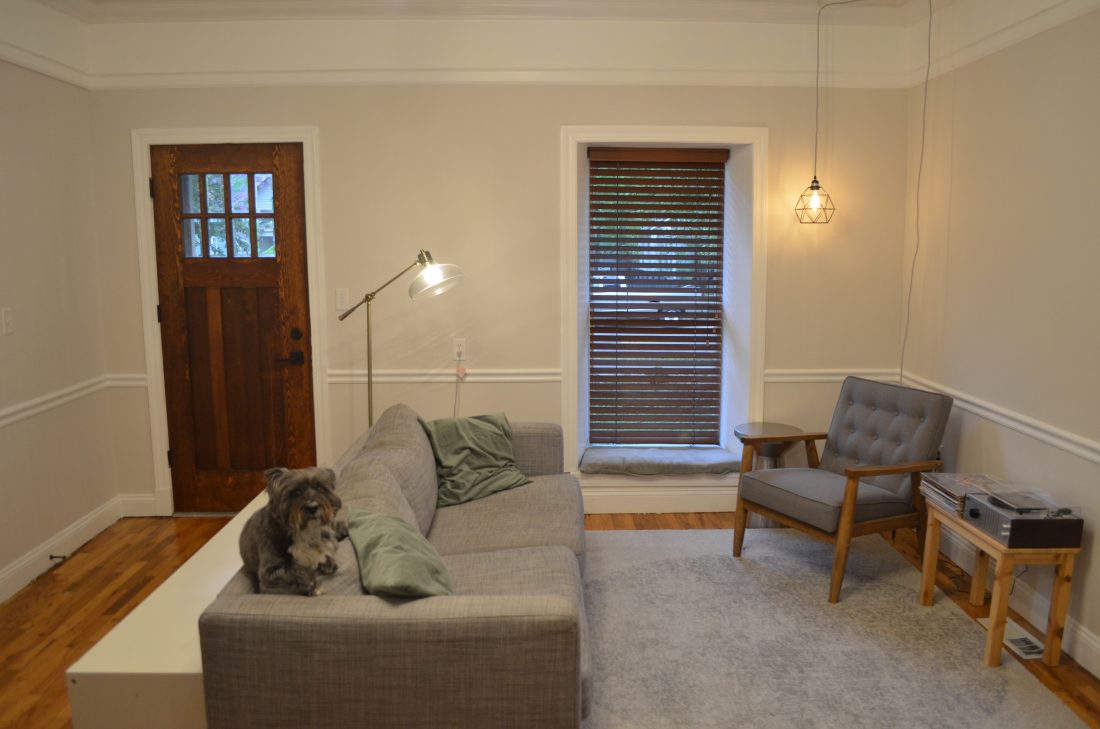 Winston, the family pet, lounges in the living room of 1117 Connecticut St.

The contemporary kitchen, two more bedrooms, a bathroom and a utility room were added sometime later. The previous owners also added a vaulted, corrugated metal ceiling in the kitchen. 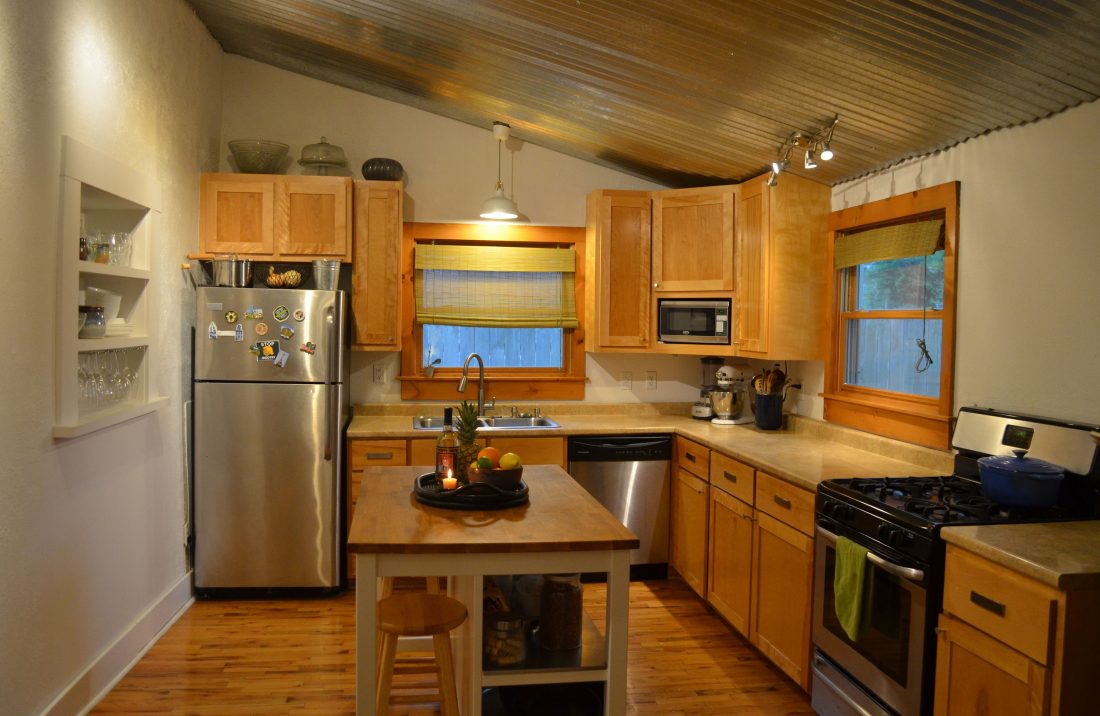 The couple have thus far focused on the home’s exterior, creating a private patio and raised-bed garden, where they have planted native, pollinator-friendly plants.

They discovered more of the original stone under the garage and used it for borders around the raised beds. It took them several days to break up and remove the old cement slab patio. They created a new red brick floor, where they spend a lot of time during nice weather. 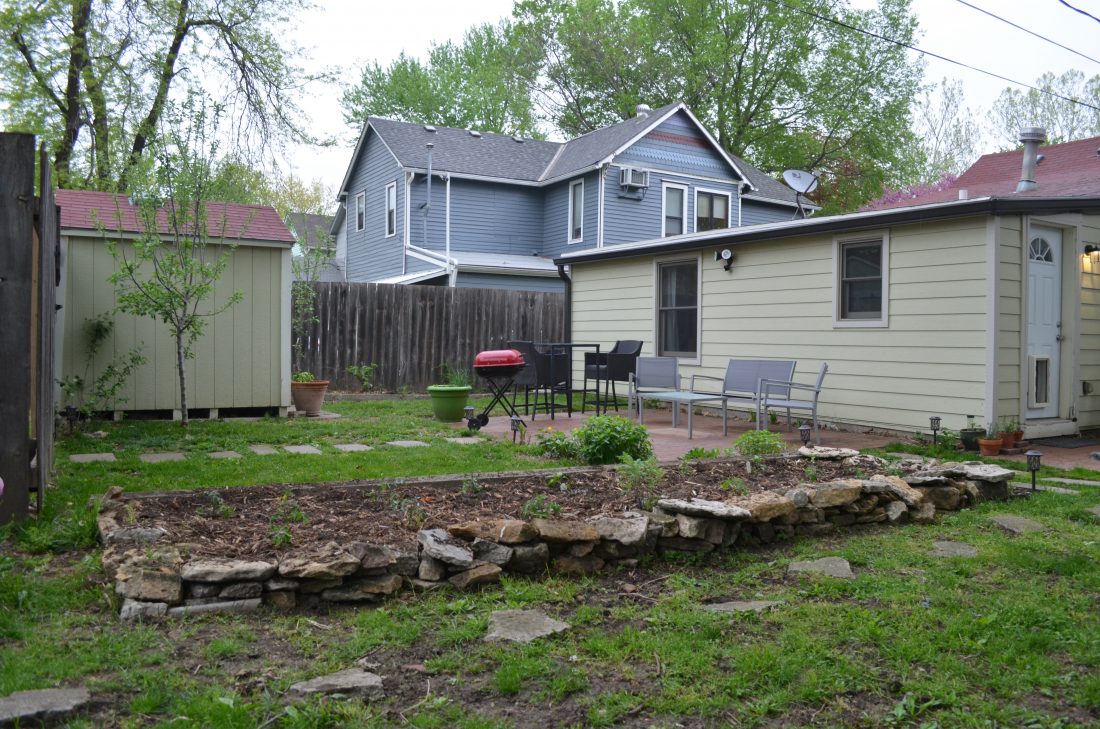 “We want to be true to the house,” said Stratton, who recently left KU to work at Bluejacket Crossing Vineyard and Winery in Eudora. They both prefer an uncluttered, minimalist style.

“We want our home to have things that are meaningful to us,” she said, which is why her great-grandmother’s dresser is in the bedroom, her brother’s artwork on a shelf. 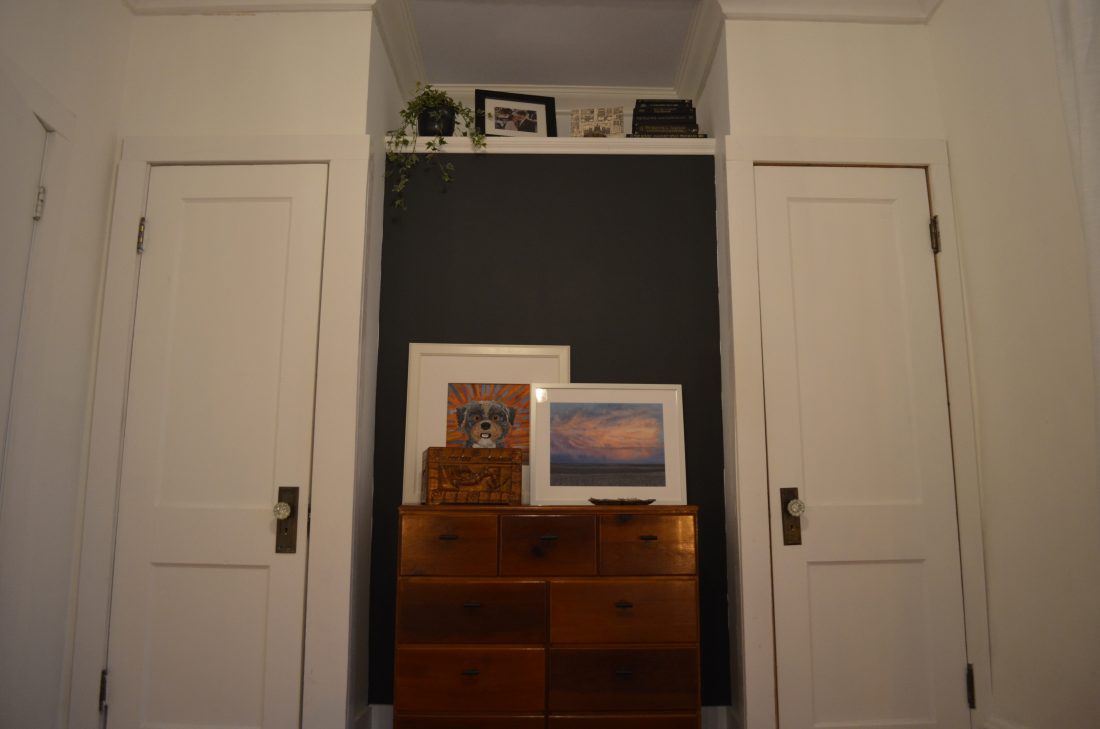 Paintings by Melody Stratton’s brother and her great-grandmother’s chest of drawers are personal touches in a bedroom at 1117 Connecticut St.

Along with the house’s history, another plus for Stratton is its proximity to downtown Lawrence.

Hays, who is the physical activity and nutrition program manager at the Kansas Department of Health and Environment in Topeka, appreciates how relaxing his home feels.

“It’s super calming to be here,” he said.

With continued care, they think the house will be around a very long time.

Though they are the current owners, in the big picture it’s only their house for a little while.

“We are just the caretakers,” Stratton said.