Homes: Couple begin with a blank sheet of paper and end up with their dream house 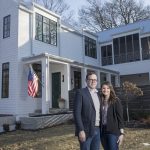 Stepping through the door, they enter not the house but an outdoor living space, which isn’t visible from the street. Another door inside the secluded area takes them into the house. 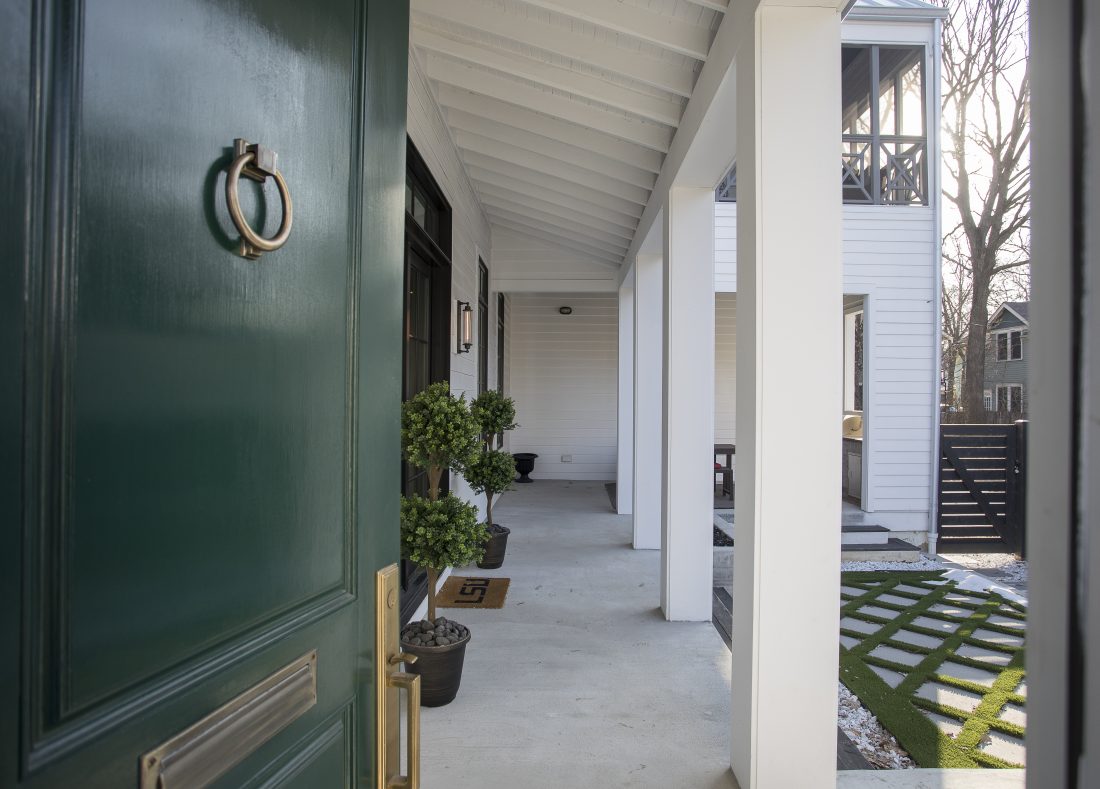 The green front door at 1616 Massachusetts St. opens to an outdoor courtyard, not visible from the street. The house is pictured Tuesday, Feb. 26, 2019.

The Silvas, who are from Louisiana, say the style – known as a hospitality door – is more familiar in the South, where courtyards are more common.

“Trick-or-Treaters look in awe,” said Cailan, who works as a diversity and outreach coordinator at the University of Kansas.

The tall white house on Lawrence’s main thoroughfare can fool some into believing it’s an older remodeled home. In reality, the couple recently dreamed it up on a blank sheet of paper.

Brad has an undergraduate degree in architecture and Cailan has a degree in interior design — both from Louisiana State University. While neither ended up working in those fields, their desire to design a house together persisted.

Brad’s work in sales and marketing for a global manufacturing and technology company took them to several cities. Recently they ended up in Kansas City, Kan., and Cailan began working at KU and commuting to Lawrence.

They were in the market for a home and kept feeling drawn to Lawrence and Massachusetts Street on weekends. They didn’t want to live in a new subdivision; they wanted to be in the heart of the city.

They noticed the lot for sale at 1616 Massachusetts St. during the summer of 2016 — a site that was perfectly located within walking distance of downtown and KU.

“We started daydreaming,” Cailan said. “If we had that lot, what would we build?”

They began creating. They wanted lots of windows and eventually settled on a style that evoked a contemporary Kansas farmhouse. 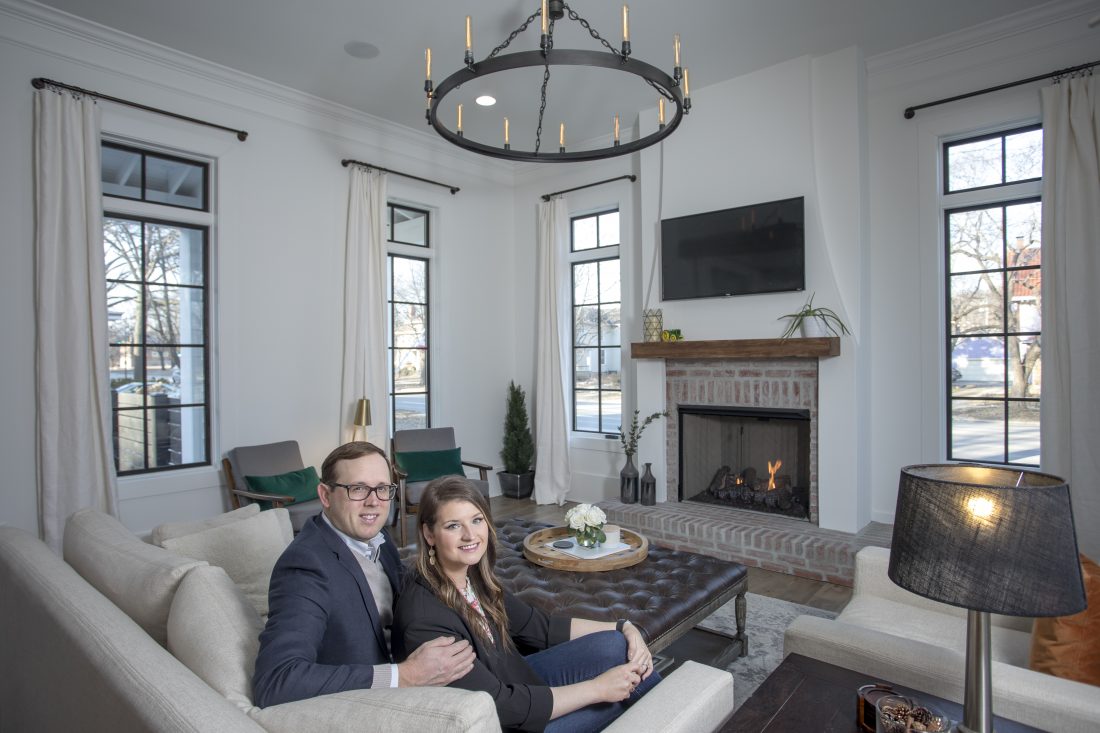 Brad and Cailan Silva sit in the living room of their home at 1616 Massachusetts St. The house is pictured Tuesday, Feb. 26, 2019.

Like a couple of pioneers staking a claim, they made an offer to the neighbor who was selling his adjoining property.

They quickly learned that the house was within the environs of a historic house, which meant they would need the approval of the Lawrence Historic Resources Commission to build.

“We bought the property contingent on the city approving the design,” Brad said.

Michael Bourque, an architect and a friend, took their ideas and created the renderings.

“It wouldn’t have happened without him,” Brad said. “He was a big part of it.” 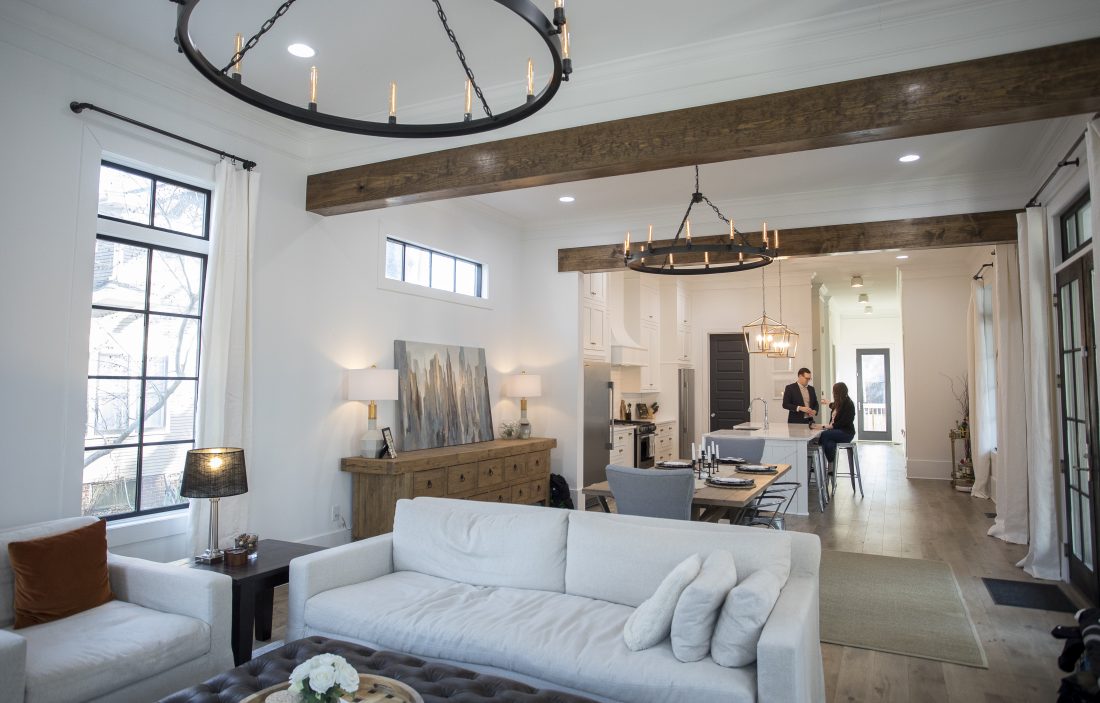 Despite some concerns by board members on the Historic Resources Commission about the style of the tall, long house, in December 2016 the Silvas received approval to build on the lot. They closed on the sale in January 2017 and began construction in March. In early December they moved in, just in time to host Christmas for their family.

Now, the Silvas open their eyes every morning to a 10-foot vaulted ceiling and a bank of windows in their master bedroom, which makes Cailan feel like she is sleeping in a tree house. 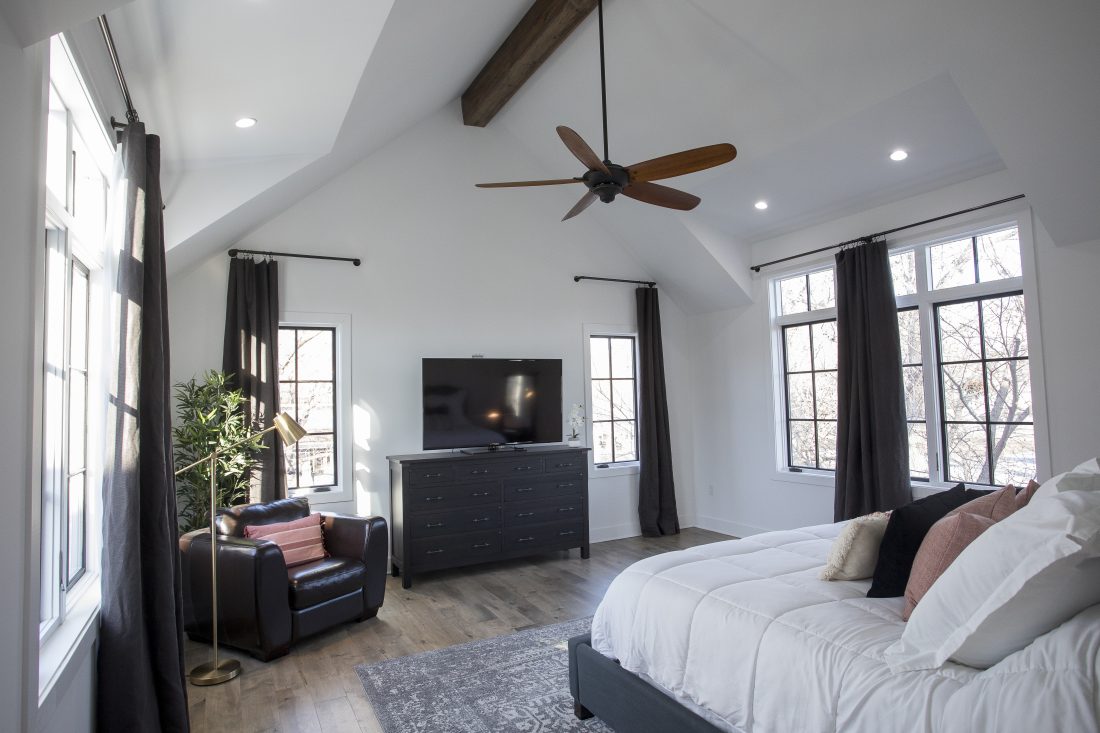 The master bedroom at 1616 Massachusetts St. features a 10-foot-tall vaulted ceiling and a bank of windows that owner Cailan Silva says create the effect of living in a treehouse. The house is pictured Tuesday, Feb. 26, 2019.

The four-bedroom home is clutter free. Things that go on other people’s counters, like espresso machines and mixers, are stored in a pantry filled with floor-to-ceiling shelves.

The kitchen and counter space at 1616 Massachusetts St. is kept clutter-free thanks to a large pantry, at right, where mixers other typical countertop appliances are stored. The house is pictured Tuesday, Feb. 26, 2019.

The three-story house has a finished basement with 9-foot ceilings. The basement features a guest room, bathroom and a TV room with exercise equipment.

Upstairs there are two more guest rooms, the master suite and a screened-in sleeping porch where they relax on summer evenings. 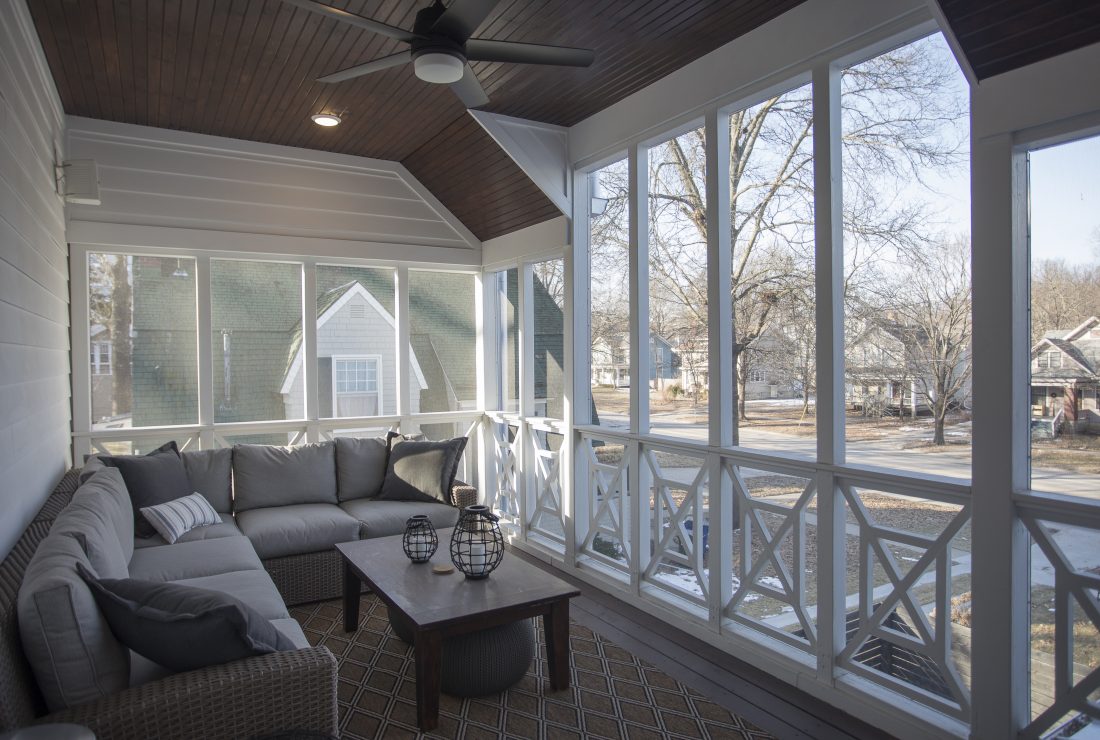 A screened-in sleeping porch on the second floor at 1616 Massachusetts St., overlooks the street to the west. The house is pictured Tuesday, Feb. 26, 2019.

Despite the effort they’ve put into creating the home, it’s time for a new dream. Brad recently learned that he would have to move from Lawrence because of his job. A for-sale sign now sits in the front yard.

Sitting together on the living room sofa, Cailan looked around and said, “This is our dream house.” 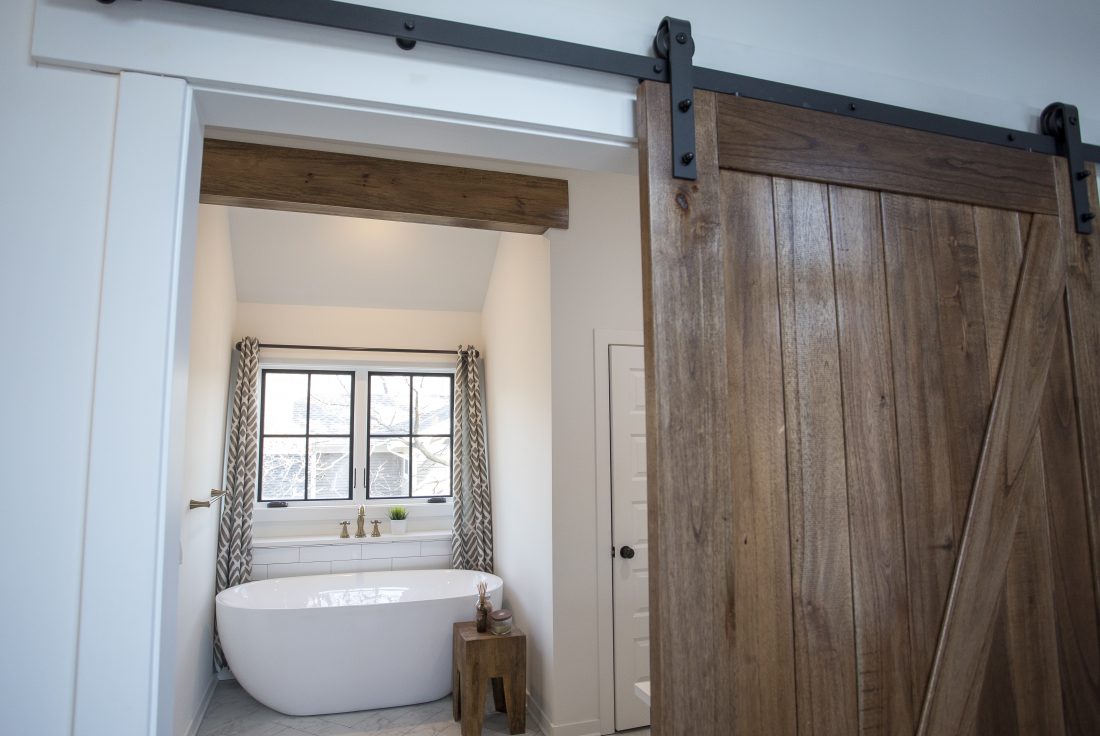 A large sliding door divides a hallway from the master suite at 1616 Massachusetts St. The house is pictured Tuesday, Feb. 26, 2019. 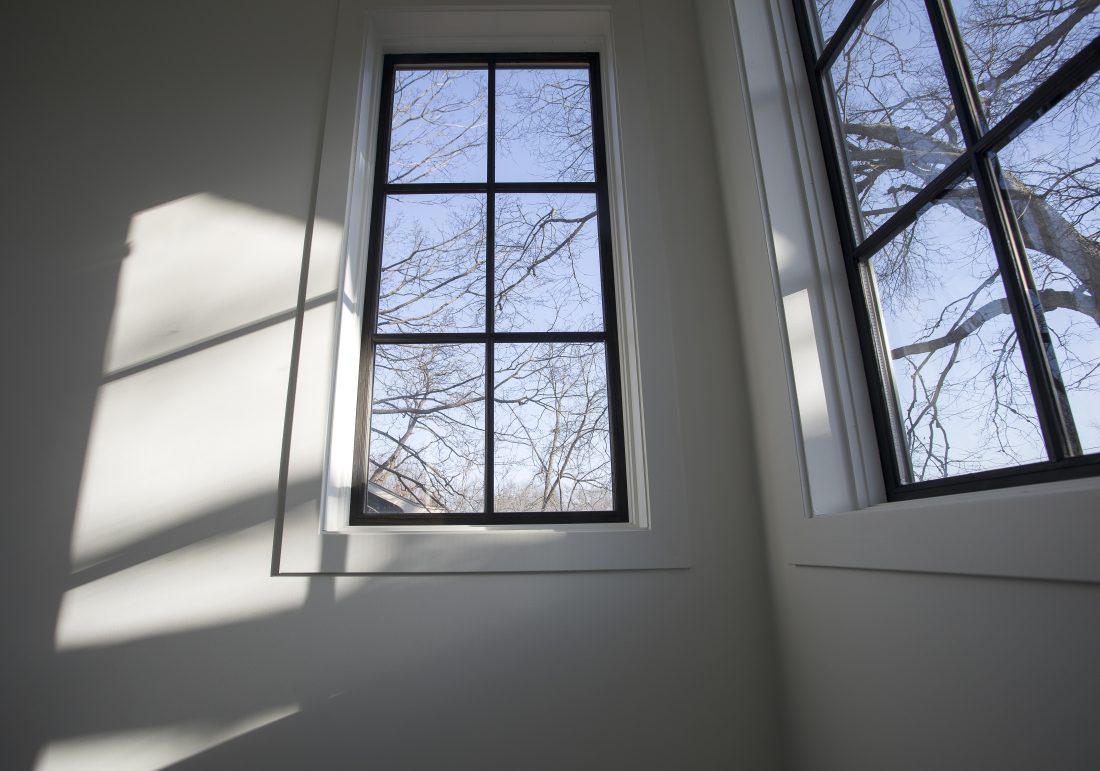 The many windows at 1616 Massachusetts St. illuminate the interior of the home and offer views of the neighborhood. The house is pictured Tuesday, Feb. 26, 2019.