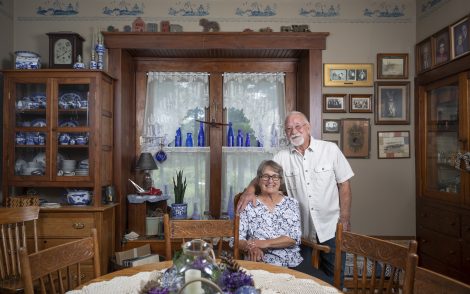 Kathy and Marvin Pine are photographed in the same dining room bay window area in the home at 1741 East 1500 Road where Marvin’s grandparents, William Roscoe Pine and Katie Finch, were married in 1909.

Marvin and Kathy Pine have become curators of what appears to be a living history museum. It’s also their home.

In a time when more people are moving toward a minimalist lifestyle, the home at 1741 East 1500 Road on the edge of North Lawrence tells the story of the Pine family through a collection of heirlooms from several generations.

Like a tour guide, Marvin points to the bay window in the dining room where his grandparents, William Roscoe Pine and Katie Mae Fincher, were married in 1909.

The room is filled with pieces of furniture Marvin’s grandparents bought as newlyweds. In an old box, Marvin and Kathy still have a receipt for the large oak table and six chairs, which cost $15.

Marvin’s late father, Howard Pine, was born in the house and later married his bride, Leta, in the dining room in 1937.

As a young boy, Marvin spent many hours with his grandparents. The house was still primitive in the late 1940s and early 1950s with a pump in the kitchen for water. They would eventually get running water in the bathroom.

“This is the original flush toilet,” Marvin said as he came through the bathroom during the tour.

He was 9 during the flood of July 13, 1951. That’s when the water rose 3 feet around the house, and Marvin remembers riding around the property in a Coast Guard boat.

It was Marvin’s father who started Howard Pine’s Garden Center, 1320 N. Third St. Marvin grew up in a house at the garden center.

After Roscoe’s death, Howard inherited the land with the house and he rented it to a farmer who cultivated the land right up to the house, which eventually fell into disrepair.

By 1986, Marvin and Kathy were able to purchase the house and the 15 acres of property, and they set to work restoring the house into their home.

They hired a contractor to modernize the plumbing and wiring and put in a new heating and air conditioning system. Plus, they turned the attic into a large bedroom. They also restored the barn and the grounds.

Marvin and Kathy spent nights and weekends removing layers of wallpaper from the walls while Marvin worked as principal of Tonganoxie Junior High. He retired in 1997.

“Fortunately for us, almost all the woodwork is original and never was touched or painted,” Marvin said. The oak floors are also original.

They live surrounded by the furnishings that once belonged to his grandparents, including Katie’s sewing chair and sewing machine. The piano and the walls are covered with photos of faces from the past, plus the family today.

“We hold on to anything family or history,” Kathy said. “We are the only ones who seemed to care about the past. That’s why we ended up with the furniture and the house.” 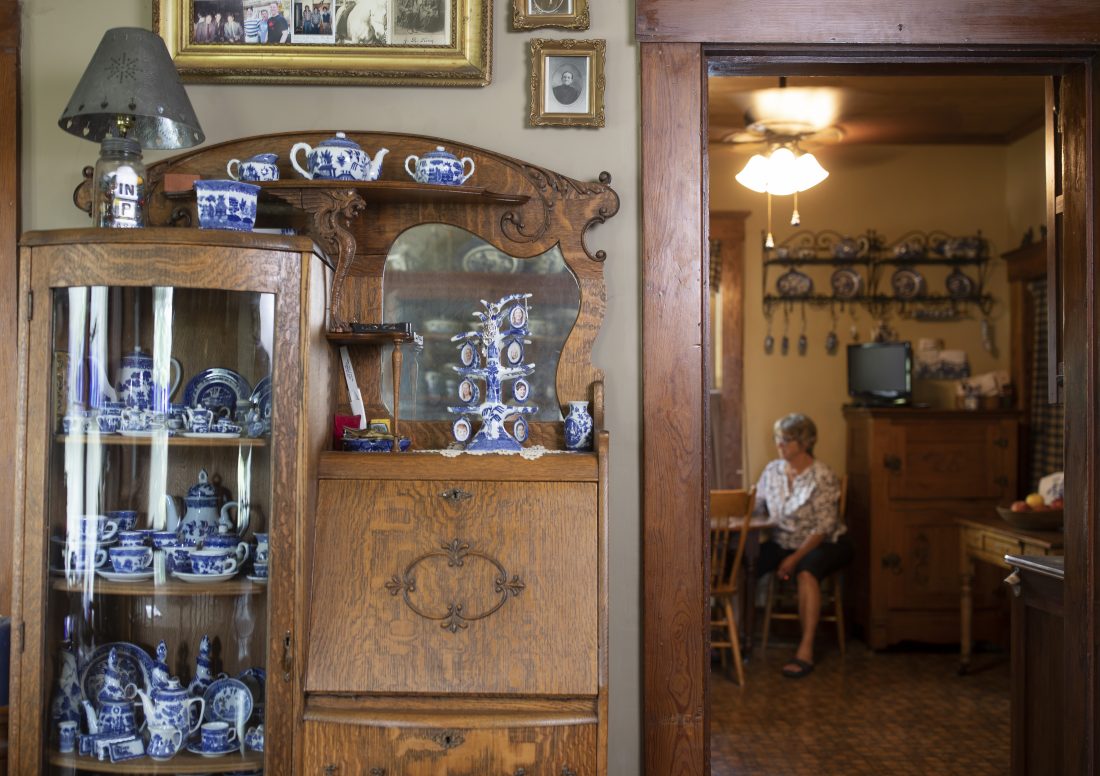 Several pieces of Pine family furniture, including the cabinet at left, are from Marvin Pine’s grandparents.

As the keepers of family treasures, they don’t discriminate — everything has value to them, it seems.

“Katie saved everything from jars of big bobby pins to every piece of lace and little button,” Kathy said. They consider it all artifacts for the family museum.

The deed to the property is a Kansas history lesson. Marvin said the land originally was part of the Delaware Indian Reservation. The Union Pacific Railroad purchased the land in the 1860s.

“The first mention of a house on the property was 1905,” Marvin said.

Marvin’s great-grandfather, William Allen Pine Jr., bought the property, which was originally 80 acres. He then gave it to his son Roscoe. Other relatives had houses nearby. At one time there were so many Pines living in the neighborhood that it was known as Pine Road, Kathy said. 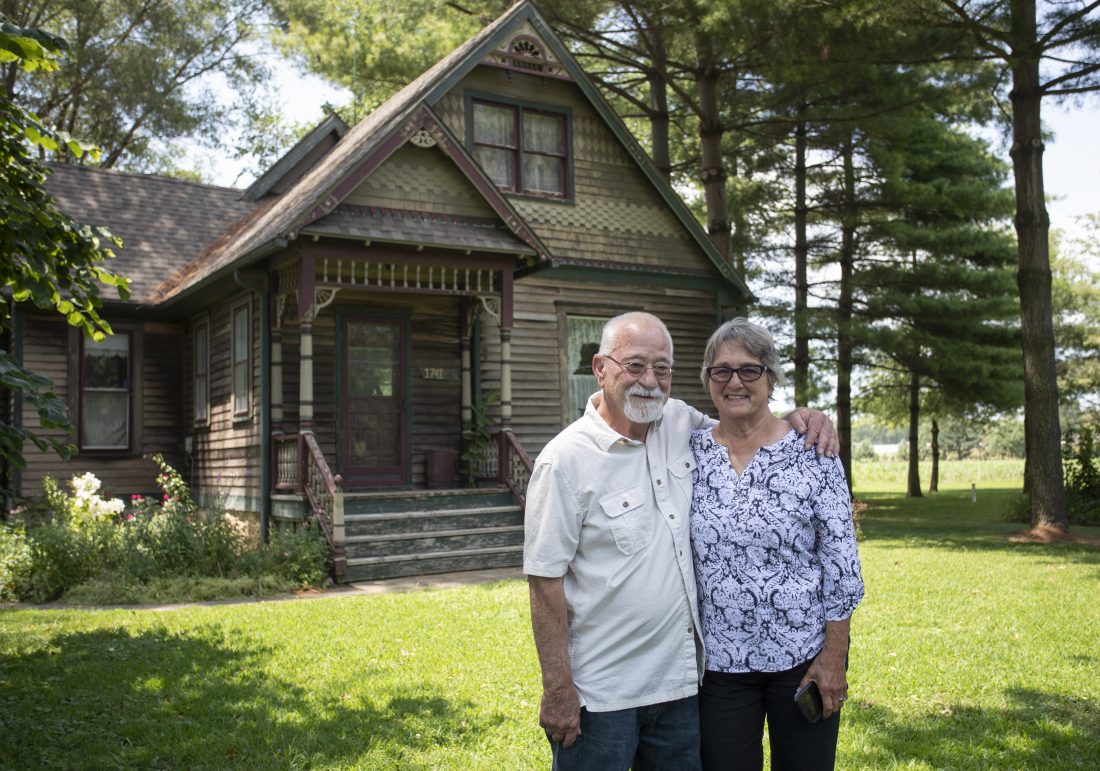 This photograph shows a similar spot to one in a photo taken in 1914 of Marvin Pine’s grandparents, William Roscoe Pine and his wife, Katie Finch.

Along with the births of babies, a son of Roscoe and Katie and Katie’s mother died in the house.

“I think we might have some friendly spirits,” Marvin said, referring to an odd occurrence when a door came off its hinges. They never heard it fall over and discovered it lying on the floor.

“He watches too many shows,” Kathy said, dismissing the idea.

The house and outbuildings are on 15 acres. The land was split in the 1950s to build the turnpike, Marvin said. They live with the constant hum of vehicles speeding past on the Kansas Turnpike off in the distance. 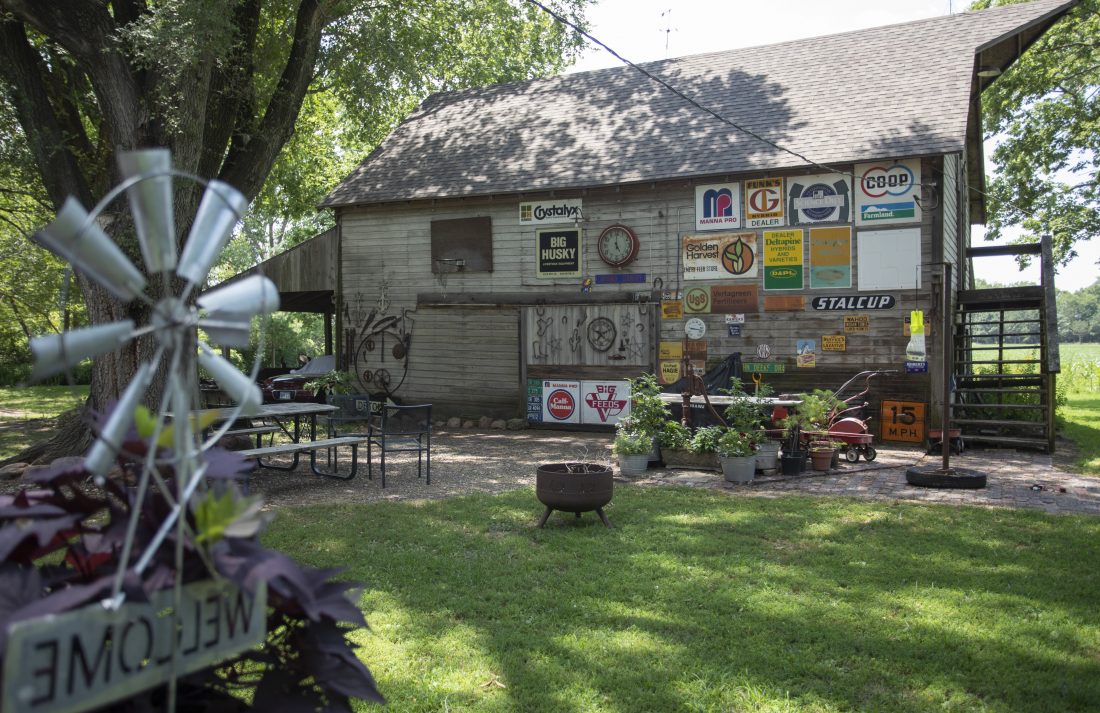 The Pine property’s original large barn towers above the house and several other outbuildings on the property. Over the years, numerous decorations and signage have added color to the fading wood.

Landscaping has been done around the original barn where old harnesses for workhorses still hang inside. They have planted an orchard and many white pine trees, which have grown tall in the past 30 years.

The old house and property remain a gathering place for the Pine family. There is always a big crowd for a July 4th celebration.

Although they don’t know what will happen to the house and property when they are gone, Marvin and Kathy hope it stays in the family. After all, this is where Roscoe brought Katie to begin their life together. Among the family heirlooms, they still have the tie he wore and her gloves from their wedding day.