For Lawrence woman, 19th-century house started as money pit but evolved into ‘my world’ 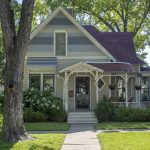 Anne Underwood and partner Rodney Troth have worked to maintain the original integrity of Underwood’s home at 1042 Rhode Island St.

The owner of the Queen Anne cottage at 1042 Rhode Island St. admits that sometimes the house has been tough to love.

Anne Underwood’s 1893 house gets a lot of compliments, but it in turn requires a lot of nurturing from her and her partner, Rodney Troth.

On a recent morning, the doors of the dining room and kitchen were opened to the original back porch.

“We eat every meal out here,” said Underwood, explaining how the screened-in porch is an extension of their living space during the warmer months. The house now is centrally air-conditioned, of course, but the open doors let in a gentle morning breeze. 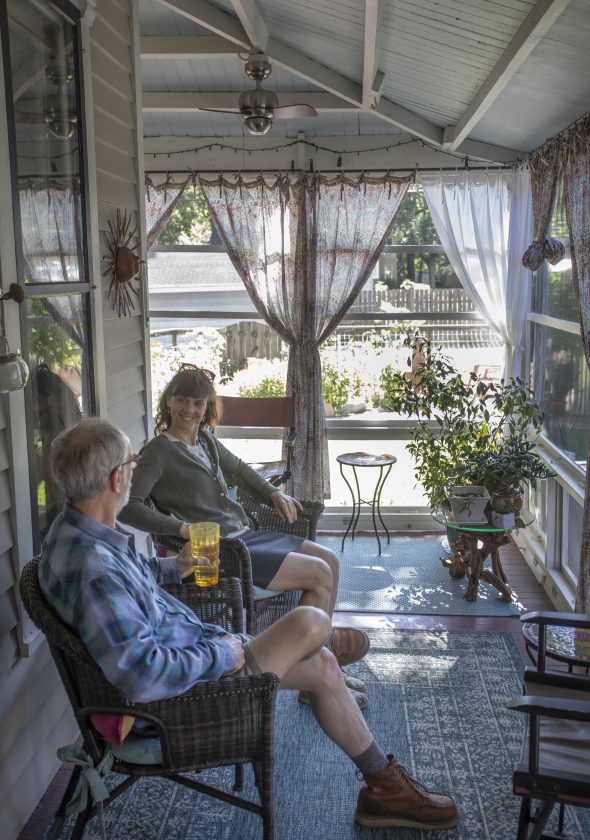 Anne Underwood and Rodney Troth have multiple options for outdoor sitting spaces around their home, including this small screened-in porch during the summer months.

Underwood and Troth have taken advantage of a space in the small backyard where four raised beds are filled with tomatoes, peppers, cucumbers, spinach, herbs and other plants. A prolific raspberry patch is nearby. They keep the soil healthy with the help of two small composters, plus they use rain barrels, which help with watering during the heat of summer.

“We get everything we need here and have extra to give away,” Underwood said.

Walking along the stone garden path that Troth designed and constructed, Underwood points out old-fashioned roses, lilies of the valley, purple phlox and pink poppies that had been blooming in the backyard before Underwood bought the property in 1995.

Through a screen, on a back porch, Anne and partner Rodney Troth have easy access to a sunny patio and raised-bed flower garden on the east side of the house.

Troth, a carpenter and artist, has put many creative touches on the house and backyard. They tore out old sidewalks and created several outdoor patio areas where they can relax, depending on the time of day. From the early morning sunlight until they need afternoon shade, they can choose different seating areas or move to one of the two porches.

Troth built a garden shed that holds tools and pottery but that also serves as a relaxation spot in the winter, when Underwood says they turn on a space heater there and enjoy a cup of coffee. 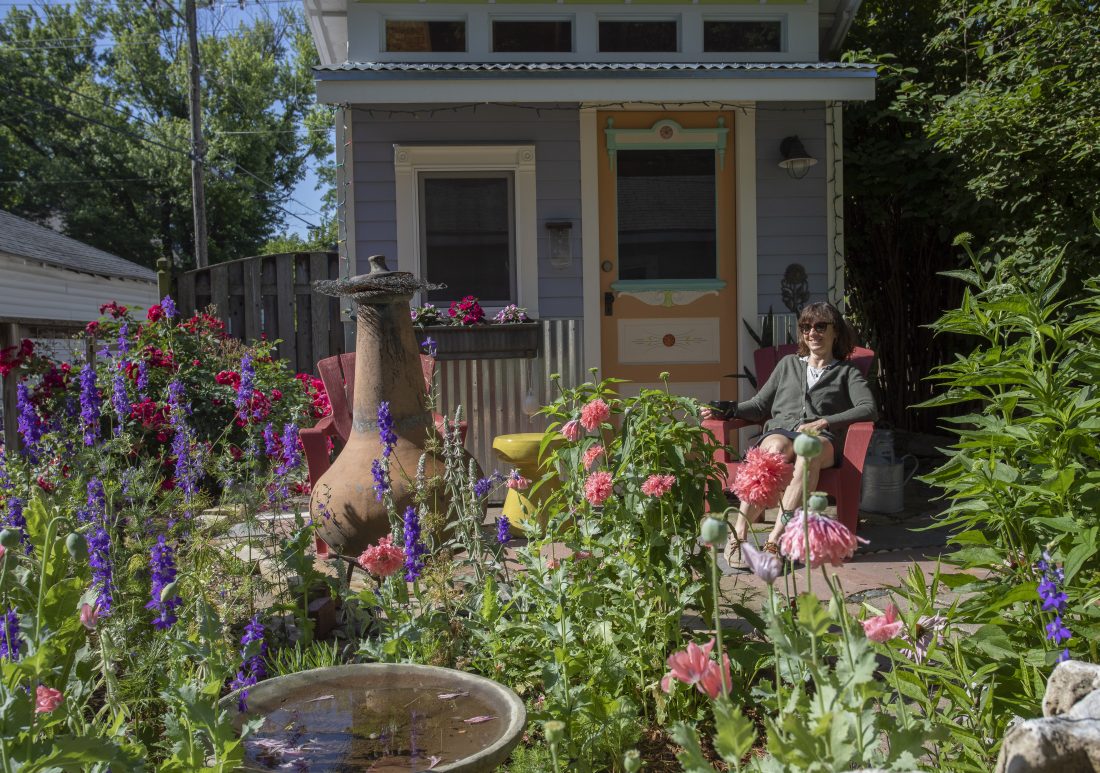 A small backyard features a raised-bed garden and a patio with a colorful garden shed designed and built by Rodney Troth, at 1042 Rhode Island St, Lawrence.

Inside the house, the work has included removing walls, refinishing bathrooms and peeling away layers of wallpaper, even from the ceilings. Underwood likens the restoration to an archeological dig.

The house is located two blocks east of Massachusetts Street, and Underwood discovered from abstracts that the 126-year-old house was once a dress and tailor shop. It was later divided into two residences for two older women who lived in separate apartments.

Underwood purchased the house for $89,000 from an English professor who was moving. At the time, she was a single parent with a young son.

“I never thought in a million years I would buy a house,” Underwood said. But it was love at first sight when she stepped into the entryway with its wainscoting and diamond-shaped stained glass window. 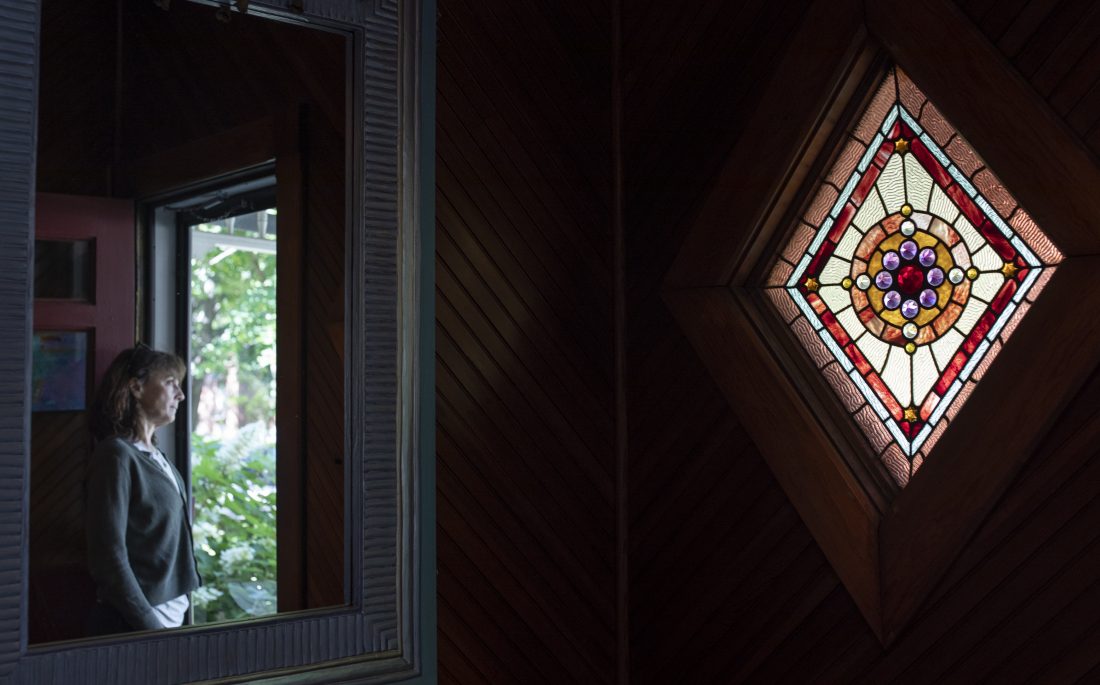 A stained-glass window, part of the original home, is just inside the front entryway to Underwood’s home.

“I was transfixed; it felt like a little chapel,” she said.

However, she woke up the day after the closing and began having regrets about purchasing the three-bedroom, 2,044-square-foot house.

“I had horrible buyer’s remorse,” Underwood said. She quickly realized that she had purchased a money pit that needed everything from a new roof to new plumbing, rewiring and insulation.

“All those below-the-surface things,” she said.

Twenty-four years later, she and the house have settled into a comfortable relationship.

Underwood is a certified Iyengar instructor and is the owner of the Yoga Center of Lawrence, which is above The Roost, at 920 Massachusetts St. Although she teaches at the center, she also has a yoga studio in her house and sees students by appointment. She is also a massage therapist who works with clients in another room of her home.

Because the house once had two apartments, there were two kitchens to contend with. Underwood completely gutted both rooms and moved a 1930s Roper stove from one apartment into the kitchen she rebuilt. She loves the small vintage gas stove and still uses it today. 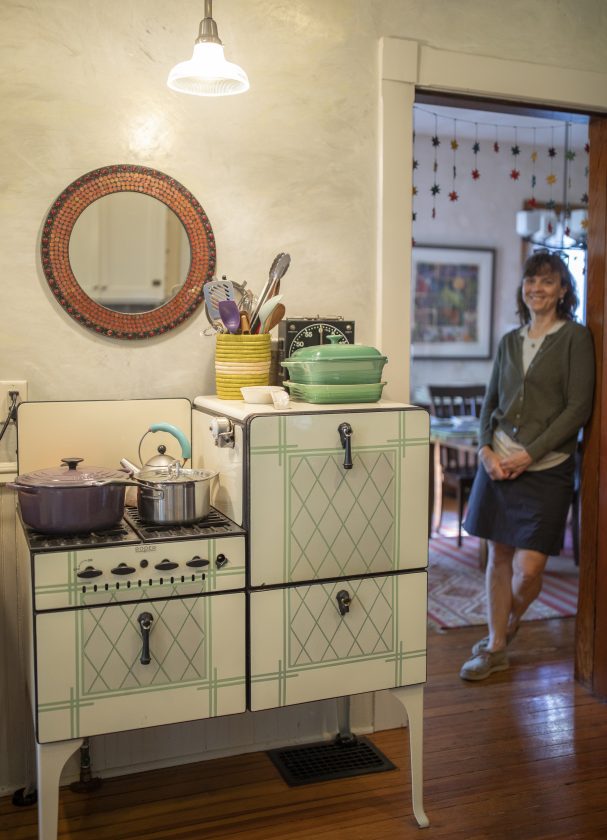 One of Underwood’s favorite pieces, which came with the home when she purchased it in 1995, is the old kitchen stove she still uses.

The house projects never end. They are currently working on replicating the original filigree that will go on the front porch roof and the box bay roof. It will match the filigree on the widow’s walk on the roof of the house. 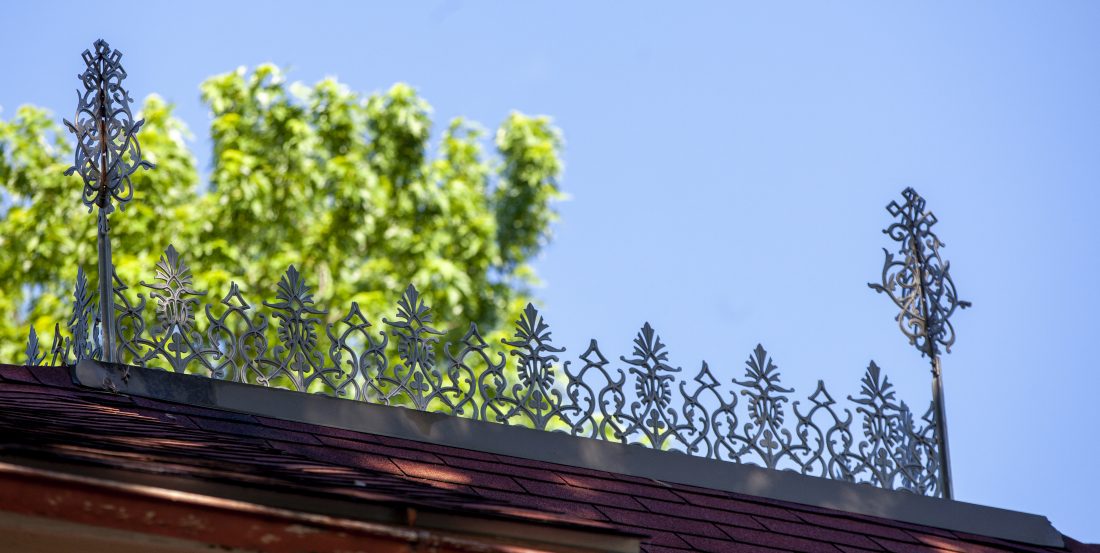 Anne Underwood’s home has a rooftop widow’s walk with restored metal filigree around the edge. Underwood’s next project on the home will be replacing similar filigree detailing on the front porch roof.

Although she has frequently thought life would be easier in a newer house, Underwood said those thoughts always pass, her mood changes, and she gets excited for the next project.

As with any relationship, the house has required commitment.

“I have been loyal,” Underwood said. “She gives a lot back.”

Garden Variety: Tapping trees is easier than you might expect

Warmer temperatures and longer days mean that sap is beginning to flow in maples and other trees around the ...