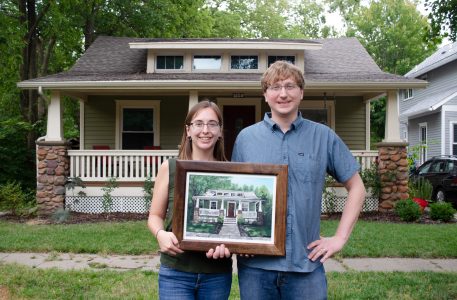 Jake Bellucci and Kristen Allen hold up a painting of their home, 1320 New Hampshire St., on Tuesday, September 24, 2019. The painting was done by Jaime Hendershot.

After moving from a west Lawrence apartment to an East Lawrence bungalow, Kristen Allen and Jake Bellucci felt they had relocated to a different state.

There was that much of a difference going from a contemporary apartment complex to a tree-lined, neighborhood just a block from Lawrence’s downtown.

The small 1920s bungalow, at 1320 New Hampshire St., is their first home, which they purchased fully renovated in 2017 from Triple BBB, LLC. Allen knew when they walked through the front door it was the house for them.

“It came on the market on Friday and within five minutes I called the realtor,” Allen said. “Saturday morning we put in an offer.”

Within 48 hours of seeing the house, they were the new owners.

On the outside, the Craftsman-style home sports a low-pitched roof and a front porch that runs the width of the house. Wood and stone columns give a feel of a much earlier time. But, step through the front door and there’s a modern feel. The open space flows from the living room and dining area through to the kitchen with its contemporary appliances and white marble counters and backsplash. 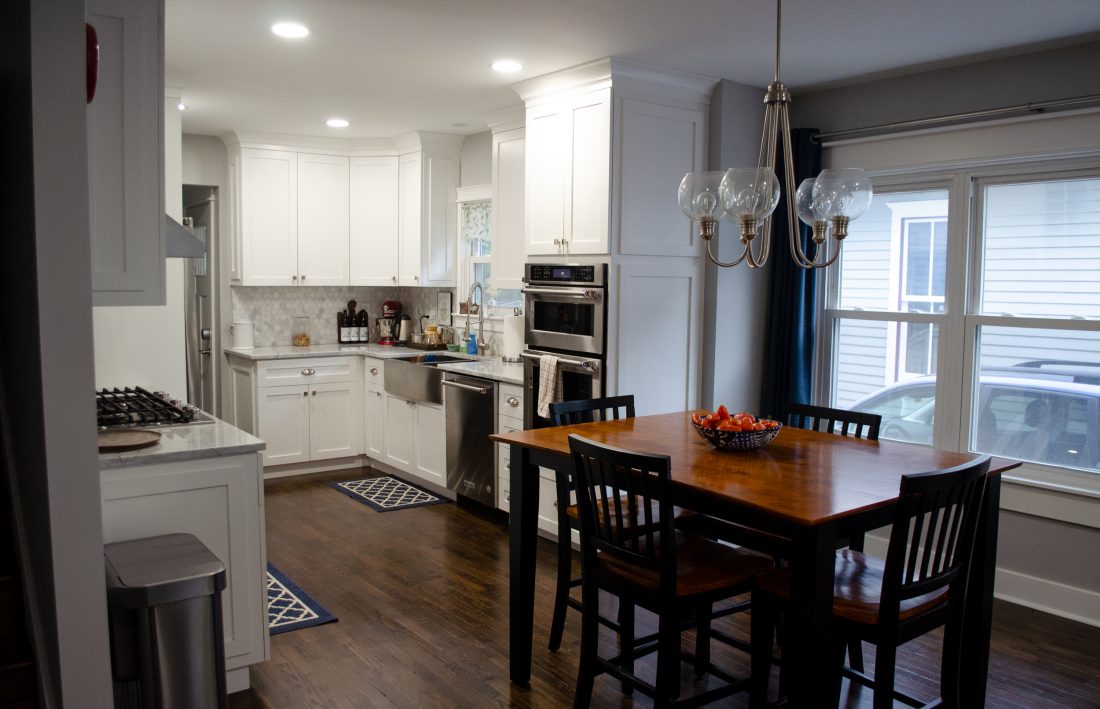 The house has two bedrooms and bathrooms on the main floor. Upstairs is a window-lined sleeping porch, which Bellucci uses as an office. When he works at home he finds it’s easy to be distracted by the birds and squirrels outside the windows. 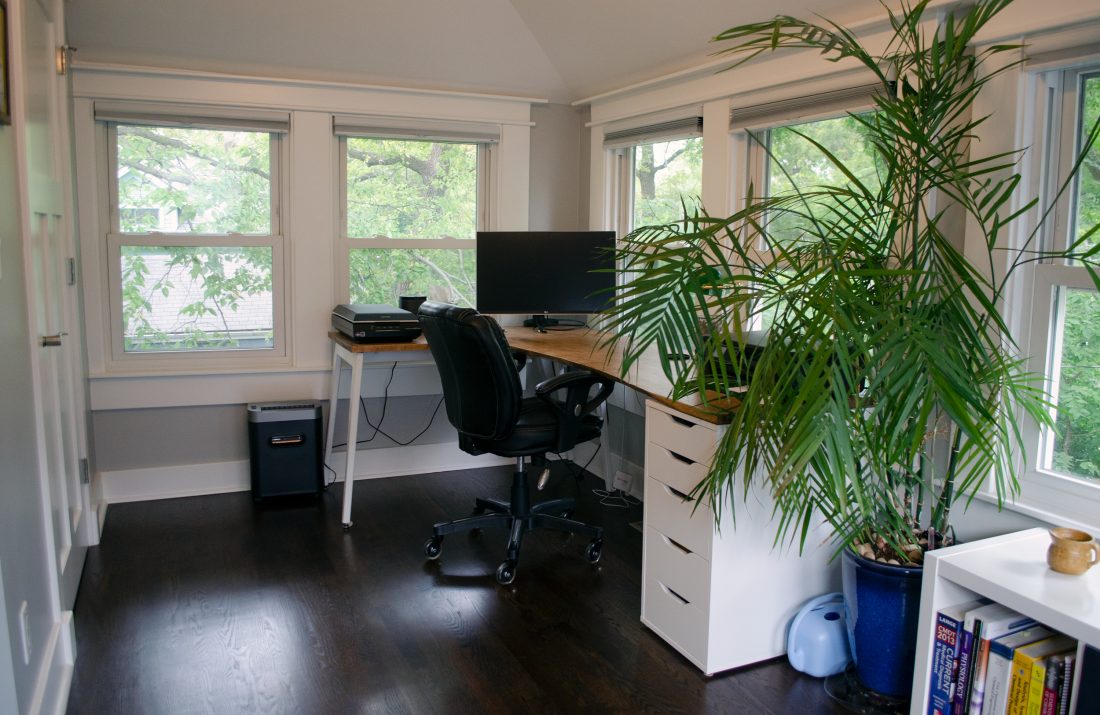 Because the inside of the house was as they wanted, this summer they focused on the outside. They put in low-maintenance landscaping and created an outdoor living space shaded by a natural canopy of large old trees. They also added a fig tree, blueberry bushes and a pawpaw tree. Plus, they have added a new privacy fence and a flagstone patio. 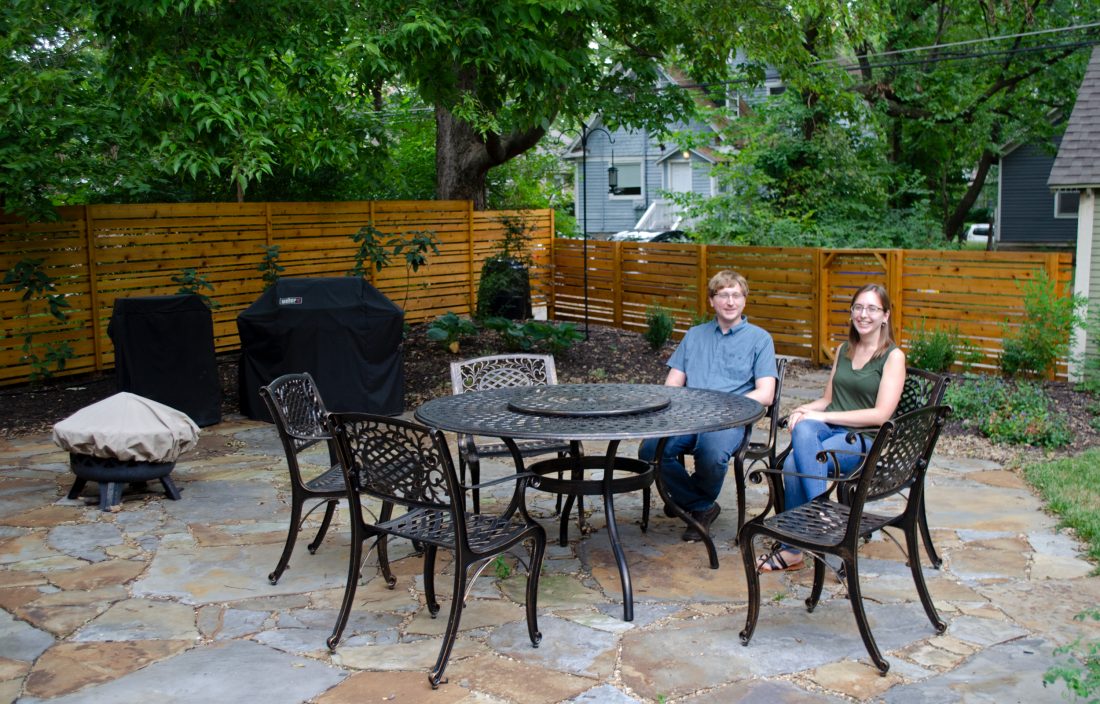 Jake Bellucci and Kristen Allen, who live at 1320 New Hampshire St., are pictured in their backyard on Tuesday, September 24, 2019.

They also poured a concrete floor inside the one-car garage, which was built slightly later than the house. They plan to use the garage for a garden shed. Bellucci uses the light on his phone to point out the lettering on several of the boards inside the garage on the wall – “The World Co. Inc. 722 Massachusetts St.” The wood might have been salvaged from a big crate that was shipped to the newspaper, Bellucci said. 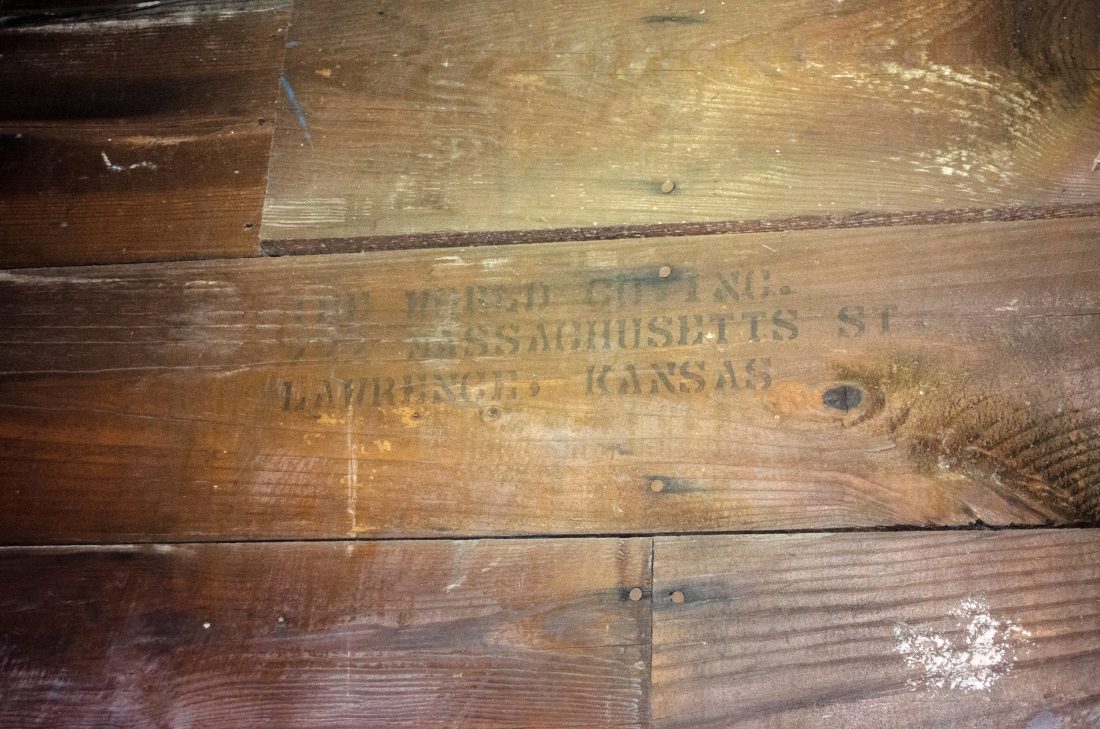 The couple, who both grew up on the East Coast, met while students at Bucknell University in Lewisburg, Pa.

Right out of college, Bellucci came to Kansas in 2013 to be a project engineer for Mars Wrigley in Topeka.

After Allen received her master’s degree, the couple married in New Jersey, and she came to Kansas in 2015. She is a physician assistant with the hospitalists at LMH Health.

At first they thought they might stay in Kansas two to three years. But they have fallen in love with their home and neighborhood in East Lawrence.

They frequently walk to local restaurants. The walk home enables them to indulge and imbibe.

“We should have factored in a food budget when we bought the house,” Allen said.

Because of their love of exploring Lawrence’s food scene, and wanting to understand the culture, they have created a podcast, “Lawrence Forking Kansas,” which can be found on iTunes.

They invite local chefs, plus restaurant and food business owners into their home and interview them at the dining room table. Since January they have created 11 episodes, with a long list to go.

Sitting in their backyard on a warm fall evening, they expressed a sense of community about their East Lawrence neighborhood. Though the old trees in their backyard had long ago put down deep roots, their own roots are now becoming entwined with them.