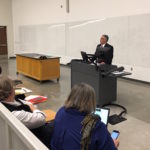 Ruben Flores, associate professor of American Studies and University Senate President, and Ashley Eshnaur, an interpreter, stand before faculty , staff and students during an open forum regarding budget cuts, on Thursday afternoon, Dec. 6, 2018.

A day after University of Kansas Interim Provost Carl Lejuez announced that roughly 30 people would be laid off to deal with a $20 million budget hole, members of the KU community vented their frustrations with the university’s leadership during an open forum sponsored by the University Senate.

University Senate President Ruben Flores moderated the event, which was live-streamed on the webinar and video-conferencing platform Zoom. Flores fielded questions and statements that came from the 50 or so people actually in the room, as well as from people writing in comments via Zoom.

Many of the commenters accused KU’s administration of being indifferent to the broader university community. Among them was sophomore Nick Hinman, who said he felt cheated.

“I can’t speak for all students, but it’s not a stretch to say a lot of people feel defrauded by the administration,” Hinman said. “… What we see, flat out, is an exploitative administrative class that is making millions of dollars a year while students, like myself, have to work three jobs to barely afford tuition and live a very basic life.”

Another commenter wrote via Zoom, “These cuts are affecting students. I had a student tell me the other day that they believe KU does not care about students but instead cares about making money, for administrators and athletics.”

Some commenters were worried about more than just indifference, however. A written comment shared over Zoom by a listener who wanted to remain anonymous was read aloud to the audience: “Most KU staff won’t speak out on the subject because they have no tenure and they are afraid of retaliation.”

It was met with applause.

Another recurring theme at the forum was the need for consistency at KU over the long term.

“If you are in this room, and you go to this university, you want it to survive,” said Lua Yuille, a KU Law professor.

Some commenters told Flores that they believed administrators at KU often viewed their positions as stepping stones to more prestigious jobs elsewhere. One commenter even suggested that only people who have taught at the university for two years should be considered for administrator positions.

Flores responded that he too thought KU had a managerial class that had no strong attachments to the university. He said he would like to ask former Provost Neeli Bendapudi, who left KU in the spring to become president of the University of Louisville in Kentucky, about the issue. But Flores said that Bendapudi has publicly stated she would not comment about her time in Kansas. He did not say when or where she had made such a statement.

“Do I have great hope that our current interim provost will remain in place or leave?” Flores said. “I don’t think he is going to stay. Publicly, I will say that. I do not know, but we need stability. I think it’s fully our responsibility to ask what the answer to that question is.”

Others, including Yuille, said the problems were linked to the larger structure of the university. Specifically, Yuille said she believes the university will only be able to thrive when it stops thinking of itself as a business.

“There are only a tiny number of corporations that have lasted as long as this university has existed. So when we adopt those philosophies and mindsets, what we are doing is saying this moment of crisis is OK,” Yuille said.

“The mission we have here, the service we provide is an internal service that we want to exist as long as possible, with staff, faculty and students who are not exploited and are valued and happy to be here,” she added.

Flores urged faculty, students and staff to confront administrators about the issues they’d raised at the forum.

“These are tax-supported institutions,” he said. “Students, you are paying tuition — it’s your education that is being harmed, and we don’t need to be embarrassed or hide from these concerns.”

Flores also said he wants to continue to press Lejuez and Chancellor Douglas Girod to work on alternative budget scenarios. Plus, he still wants to speak directly with KU Endowment about whether it can help with the cuts, instead of having to go through university leaders.

“I do not believe there is no money to help in this crisis,” Flores said. “We are at a crisis mode at our university. If Endowment cannot help, if they are not willing to help provide alternatives, then they are not our partners.”

To Paul Outka, a professor of English who addressed the crowd, the whole situation had a familiar tone. He had come to KU from Florida State University, which experienced a budget crisis in 2011.

“There was a sense of despair about the university,” Outka said of the crisis at FSU. “Many of the things that people are experiencing here. But one of the dangers we are in at this moment is you start losing faculty through attrition and early retirement. And other universities, not experiencing a budget crisis, will come and take people.

“That’s a hard thing to make up for,” Outka said. “The future of the university is very much at stake.”