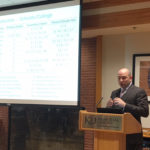 Carl Lejuez, interim provost and executive vice chancellor of the University of Kansas, spoke during a budget conversation Wednesday, Sept. 26, 2018, in the Kansas Room of the Memorial Union.

The University of Kansas plans to leave many vacant faculty positions unfilled and use a buyout program for older faculty members to help cut $20 million from the Lawrence campus’ budget, KU’s interim provost said.

At a town hall meeting Wednesday, Carl Lejuez, interim provost and executive vice chancellor, presented a list of budget cuts that the university’s schools and other operational units were putting into effect. Although Lejuez did not have specific numbers of positions at KU that would go unfilled, the list indicated that all of KU’s schools would be using unfilled faculty positions to make their cuts.

Lejuez said a new voluntary retirement program that was adopted in August would work in tandem with the schools’ decisions not to fill positions.

So far, Lejuez said, 45 faculty members have applied for the program, a buyout option that’s offered to tenured and tenure-track faculty who are 62 or older. The program pays faculty members nine months of their base salary if they retire early. The deadline is Oct. 5, and Lejuez anticipated that more than 50 faculty members would have signed up by then.

Lejuez said the program would give the schools the flexibility to either refill the positions or eliminate them completely.

If 50 faculty members were to take the voluntary retirement option, Lejuez estimated, the vacant positions would save $5 million in cash to units and $2 million in base funds.

Meanwhile, Kirk McClure, professor of urban planning and current president of KU’s Faculty Senate, said he was concerned by the idea that some of the positions left by retiring employees would be permanently eliminated.

“When you lose your top-flight faculty, your units go down and the young stars won’t want to come to the university,” McClure said. “Where it becomes dangerous — most of these unfilled faculty positions will become closed. That means it’s gone, and that’s what is dangerous.”

Several faculty members also expressed concern that the reality of the budget cuts won’t be felt until next year when people could actually lose their jobs. Joe Harrington, a professor of English, said he is worried about staff in particular.

“There are a lot of people who enable me to do my job,” Harrington said.

In addition to leaving positions unfilled this year, some departments are also planning to reduce the number of graduate teaching assistants, delay renovations to their facilities and cut back on faculty travel funds.

No news on KU jet

At previous meetings, Lejuez promised he would have more answers soon on the status of the university’s private jet, which critics contend costs the university millions of dollars in expenses.

However, at Wednesday’s meeting, Lejuez said he didn’t have anything new to report.

“This has been a big learning experience for me in terms of being able to say what I am able to say at different times,” Lejuez said. “(I’m) a rookie provost, and I made a mistake in promising things that I believed I could deliver.”

Lejuez also said he has been insensitive in previous discussions about the jet, not thinking about the people who work in KU Aviation Services or the donors who put money behind the plane.

“I have to be sensitive to people whose livelihood is related to this,” Lejuez said.