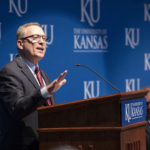 After only three months as athletic director at the University of Kansas, Jeff Long answered a barrage of questions Thursday during the University Senate’s monthly meeting.

As KU faces a $20 million budget cut, some faculty and staff believe a solution to facing harsh cuts would be for Kansas Athletics Inc. to lose the $1.5 million it receives from the university, plus make a $1.5 million contribution, which would help ease the burden of the 6 percent cut all departments are being forced to make.

Long made it clear that Kansas Athletics was making a $90,000 cut from its approximately $99 million budget.

“Many of you probably don’t know we are subject to those same cuts,” Long said. “That may not seem significant, but it is significant to us — we are suffering (from those) cuts, as well. We certainly appreciate that it has a much larger impact on other places on campus.”

Meanwhile, University Senate President Ruben Flores told Long that many in the room felt there wasn’t any transparency with Kansas Athletics, which he described as “a massive corporation” removed from the academic side of the university.

Flores spoke about a growing cynicism among faculty and staff toward Kansas Athletics. Some in the room couldn’t remember the last time an athletic director came to a University Senate meeting, but it had been at least a decade.

“Naturally, there is cynicism because we haven’t had that, and you have been put in this position and have been here three months,” said Suzanne Valdez, with KU School of Law, who complimented Long on what he had learned so far. “Now there is this buildup, and it’s coming together in a perfect storm.”

Long said he is trying to be more transparent, and he also admitted that he had much to learn. He said this was the first time in his career — he’s worked for 11 institutions — where the athletic department was a separate nonprofit corporation.

“It’s unusual. There is only a handful of them across the country,” Long said. “I am still getting used to that fact, and the different laws I have to be aware of.”

Long realizes that, because Kansas Athletics has been separate from the rest of the university, a lack of transparency has built up.

“I am thinking we can build a bridge across that,” Long said.

Lorie Williams, a faculty senate member and a lecturer with the Applied English Center, presented statistics from the Chronicle of Higher Education. In the Big 12, the University of Texas and University of Oklahoma give back 6 percent of their athletic revenues to the university, which is used for libraries, classrooms and buildings.

“The University of Arkansas doubled their contribution to academics, and I would like to know why you don’t pay anything,” Williams said.

However, it was under Long’s leadership at the University of Arkansas that the athletic department more than doubled its contribution back to the campus.

“It will be my goal” to give dollars back, Long said. But he added it would have to be a shared goal with the chancellor and the board.

“I want to build an athletic program that could give back to the institution, but we are not there yet. We are not close to Oklahoma and Texas and what they generate,” Long said.

He noted that Texas has a gross revenue of approximately $200 million.

“We are not at a $100 million a year. We are at $99 million. We would like to give back when we get our program up and running and have generated that kind of revenue,” Long said.

Currently, fewer than 20 of the 130 Division I FBS schools give back to their universities, Long said.

Faculty Senate President Kirk McClure said he had been told that Kansas Athletics would only be able to make a contribution once it had surpassed $150 million in revenue, although he didn’t specify where he had heard that. He wanted Long to tell him why that was the case.

“We are not financially solvent enough to be able to do it,” Long said. “We are behind many of our competitors.”

Long said Kansas Athletics is focused on sport and focused on competing to the benefit of the university.

“Where is that benefit to the university?” McClure said. “We are losing 80 to 100 faculty members. That’s going to hurt our reputation.”

Long said that when the department gets to the point where it can contribute, it will.

“In my three months here, I think we’re years down the road from that,” Long said.

Flores said having Long speak was important as the university faced its budget cuts. During the previous two meetings this semester, the University Senate heard from Interim Provost Carl Lejuez and Chancellor Douglas Girod.