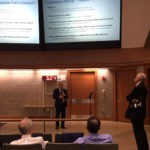 Despite calls from faculty for the University of Kansas’ athletic department and endowment organization to help out with a $20 million budget cut, interim Provost Carl Lejuez said at a town hall meeting Wednesday that those two entities couldn’t do much to ease the pain.

That news left Faculty Senate President Kirk McClure upset. It was McClure who had first suggested ways that Kansas Athletics Inc. and KU Endowment could each take a 3 percent cut to their budgets to ease the 6 percent across-the-board budget cut occurring on the Lawrence campus.

“You are asking faculty to make a 6 percent cut,” McClure said during the question-and-answer portion of the meeting at KU’s Budig Hall. “I just want them to come up with three ways they can make cuts, and convince us that the pain of those plans are greater than the pain of cutting the faculty and staff.”

Lejuez acknowledged that faculty, staff, and some students are suffering because of the need to leave positions unfilled and spread faculty resources ever thinner.

However, Lejuez said more than 98 percent of the gifts that make up KU Endowment’s $191 million in available money are earmarked for a specific purpose by their donors, and KU Endowment can’t deviate from that.

Furthermore, Lejuez added, donors generally don’t want to pitch in for a vague, general need such as KU’s budget problems. The university’s donors would not be passionate about considering or making a major gift just to fill a budget hole, he said.

Lejuez also said he didn’t feel the university could cut the $1.5 million in support that it provides to Kansas Athletics. He did not cite any specific reasons for that, other than that he thought Chancellor Douglas Girod wasn’t likely to go along with it.

“For people who are hurting, I know this feels like treason,” Lejuez said.

Lejuez previously had not expected to cut many filled positions this year. He had expected many of this year’s budget adjustments to be made with cash that is in carry-forward accounts — a type of reserve fund — that many departments have.

However, on Wednesday, Lejuez said that some departments don’t have enough reserve money to cover the needed cuts over the next few months. These departments would be forced to shed positions sooner, he said.

Lejuez had no information on which departments were affected or how many jobs could be lost.

‘I don’t know any specifics,” Lejuez said. “I have said clearly most (position) cuts would come in the next year. But, I am hearing from units and they can’t move forward, because they don’t have enough cash.”

The final budget conversation of the fall semester will be 3:30 p.m. to 5 p.m. Dec. 5 in 120 Budig Hall. It will focus on the efforts of KU leadership to develop and implement a new budget model.

Editor’s note: The story has been updated to accurately describe the gifts that make up KU Endowment’s $191 million in available money, and to clarify Lejuez’s past statements about job cuts.