KU will focus on faculty and students once budget is balanced, chancellor says 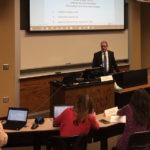 University of Kansas Chancellor Douglas Girod has been meeting with the three main gubernatorial candidates, along with key legislators, regarding the importance of funding higher education.

Girod spoke to the University Senate — made up of faculty, staff and student representatives — Thursday afternoon about those meetings. However, in terms of dollars, there were no commitments from any of the candidates, he said.

“A new governor in January will define what this legislative session will look like,” Girod said.

Girod is hoping the Legislature will approve the $85 million budget the Kansas Board of Regents is asking the state for. If it’s approved, somewhere in the range of $33 million dollars would come to the KU campuses.

“We are simply asking for the funding back that was cut by the Legislature in 2008,” he said. “We have been asking for that money for the past 10 years and haven’t had much luck.”

Girod told the group that it has been an especially challenging time for the university since the announcement in May of the $20 million budget cuts at KU.

“We had been on a path of spending more than we were bringing in. I do believe, as we navigate through this difficult situation, we will take control of our destiny, which we can’t do in the current situation,” he said. “It will take several years to fix the problem.”

Girod also told the Senate that the student head count was up slightly in 2018.

However, he quickly added, “In reality we are flat.”

In the current environment, where enrollment is declining at universities across the country, “I consider flat a victory,” Girod said.

Meanwhile, the Board of Regents reported Monday that KU’s total 2018 enrollment was at 24,246, down .62 percent. At the same time, KU reported its head count of 28,510 students across all campuses, with an increase of 63 students from last year.

“We did a head count, which is what we traditionally do,” Girod said. “It’s the way we always have done it.”

The Board of Regents used a full-time equivalency metric instead of counting heads.

“Last fall, we had the most expensive tuition of state schools in the Big 12,” he said.

Grant Daily, a Student Senate representative, asked the chancellor what the plan was if enrollment rates remained flat and what could be done so that students would not be negatively affected.

“We have to make sure we don’t drop,” Girod said. “Having said that, it will fluctuate. You don’t want big changes every year. We don’t want to be chasing our tail. But we want to be aggressive on enrollment and who is here their sophomore year, senior year and graduate students. We will see drops. That’s what is happening nationally. We are doing better than most.”

Girod said the university had been in an austerity period for the past 10 years, topped with a $20 million budget cut, but he was hopeful. Once the budget is balanced, funding faculty and staff would be a priority, along with holding the line on tuition.

“Once we balance the budget, anything we bring to the table will go to our priority,” Girod said. “We have to keep taking care of our people or we won’t have the incredible people we have.”