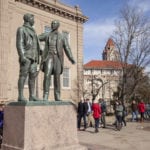 More than 60 of the University of Kansas’ tenured or tenure-track faculty had signed up by Friday’s deadline for early retirement through the Voluntary Separation Incentive Program.

“The way we set it up, we have given the savings to the individual schools and college,” Lejuez said. “Specifically there may be some cases where a position may be eliminated altogether and other cases where a position will be held open for a few years using other ways to cover the course. It does allow the units some flexibility in managing their budget cuts.”

The buyout pays the retiring faculty member’s annual base salary for a year. Lejuez estimated that those retiring were earning about $100,000 on average.

“They have been here for some time,” Lejuez said.

The Voluntary Separation Incentive Program was announced over the summer, as KU looked at places to cut its budget. Those who qualified under the university policy began signing up in August with the deadline of Oct. 5.

The buyout was open only to faculty who would be 62 years old at the time of their retirement.

During a recent budget conversation, Lejuez had estimated that if 50 faculty members signed up in three years, the vacant positions would save $5 million in cash to units and $2 million in base funds.

On Monday, Lejuez said those had only been guesses.

“I am trying to be more conservative. It all depends when we rehire,” he said.

Moreover, although retiring faculty members would get their salary for a year, they wouldn’t be receiving any of their standard benefits package, which could bring another $20,000 to $30,000 savings per retiring person.

“Every case would be different,” Lejuez said.

The majority of those who signed up will be leaving this summer; others will be leaving in December 2019 and next year. Spreading this out allows the university to better handle the number of vacancies.

“Where folks are leaving, if it’s an immediate threat, of course, I would suspect a unit would move to rehire quicker,” Lejuez said.

Lejuez said that some of those retiring were associate professors, but some faculty in leadership positions were also taking the buyout.

“In those cases, we’ll have to do what we can to transition to new leadership,” he said.

Although there will be a sense of loss as those senior faculty leave, Lejuez said it’s an opportunity to bring in early-career faculty with new visions.

“Lawrence is such a great intellectual community, and there are many outstanding lecturers who can help us with instruction,” Lejuez said. “There is a lot we can do to assure the quality of instruction won’t suffer.”