Girod to KU crowd: ‘Taking the bull by the horns’ is needed on budget cuts 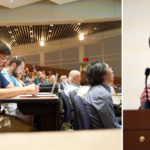 At left, a crowd listens at a University of Kansas town hall meeting about budget cuts on Monday, Aug. 27, 2018 at Eaton Hall on campus. At right, KU Chancellor Douglas Girod addresses the crowd at the start of meeting.

Chancellor Douglas Girod told a crowd Monday that it would be unwise for the University of Kansas to move more slowly in making $20 million worth of budget cuts aimed at shoring up the university’s finances.

As part of a university “town hall” meeting Monday afternoon, Girod said it would take a year or two to get through the 5.8 percent realignment to the budget, but it “will get the university back on track much quicker and put us in charge of our destiny,” Girod said.

Girod spoke briefly during the meeting in the Spahr Engineering classroom at Eaton Hall. He told the crowd the university had been spending more than its revenue growth, which had caused challenges around budgeting.

“Taking the bull by the horns,” Girod said, was the best way to fix the budget problem.

“We can do this and come out the other side a better institution because of it,” he said.

Girod also noted that the chancellor’s office had taken a 10 percent cut, and it continued to look at every aspect of what it was doing and how it could continue to reduce expenses. The Journal-World on Friday asked the chancellor’s public affairs office for a list of cuts made to the office of the chancellor and other department budgets directly managed by the chancellor. A spokeswoman for the office said via email on Friday that information about the cuts was not immediately available, and also provided no details on Monday.

Interim Provost Carl Lejuez, who hosted the meeting, said the $20 million cut to the Lawrence campus of KU was necessary to avoid financial calamity in the coming years. 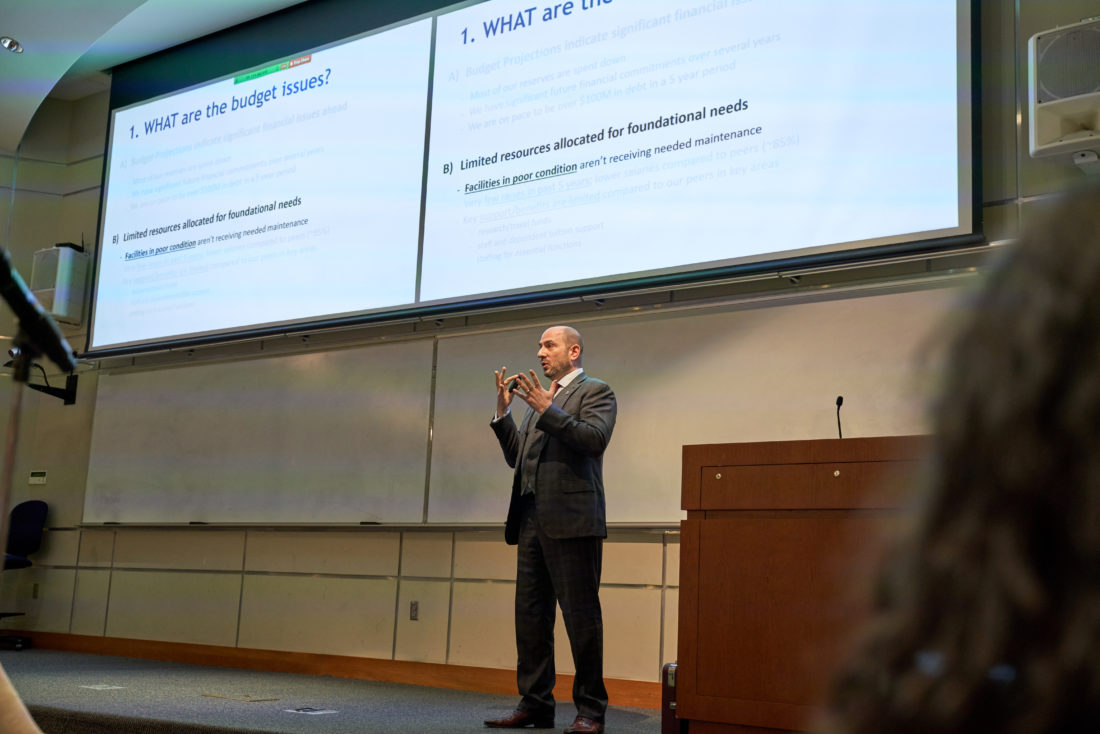 He used the meeting to explain again the necessity for the one-time cuts, and how after a difficult year, the university could move on to aspirational priorities.

“One year of cuts allow us to have our spending revenue flattening out and preserves our savings,” Lejuez said.

Lejuez did garner some praise for how he is trying to address the issues. Ron Barrett-Gonzalez, a professor of aerospace engineering who has often been critical of university spending decisions, said Lejuez was listening to concerns of the university community.

“I have met more with the interim provost than the three who had preceded him,” Barrett-Gonzalez said. His comment was met by applause.

Lev Comolli, a representative of Students Against Rising Tuition, asked about the future of the university’s jet. Critics have pointed to use of the jet as an unnecessary expense and said KU could save millions if it were to sell the aircraft and use a smaller plane.

“We are close,” Lejuez said. However, Lejuez said he wasn’t the person to make an announcement regarding the jet. He said it involved other people, but he indicated something would be announced very soon.

Kirk McClure, president of the KU Faculty Senate, said the $20 million cut should be shared equally, and other units needed to chip in. While they heard about the aircraft, McClure asked if they heard from Kansas Athletics regarding donating $1.5 million to the university, or an increase in funding from KU Endowment.

“We sent a proposal months ago,” McClure asked. “When will we have an answer?”

Lejuez said he planned to set up meetings with McClure, the chancellor and KU Endowment.

“I would love to find money in either of these places,” Lejuez said, but he wasn’t sure how either of those would work.

Lejuez also would be setting up a meeting with Jeff Long, the new athletic director who just recently arrived on campus.

Lejuez plans to have two more town halls this semester, in October and December. During the next one, he hopes to focus on Kansas Athletics.

Lejuez applauded McClure for the work he was doing in trying to find solutions to the budget cuts.

“For all we know, either of those two groups might agree,” Lejuez said. “I would love to say to faculty and staff, ‘We thought you were going to have to do this, but you don’t have to.'”