KU to shed more than 150 positions, lay off about 30 people, interim provost says 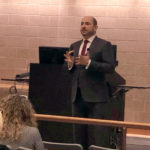 The University of Kansas will be shedding more than 150 positions to deal with a $20 million budget hole, and about 30 people will be laid off as part of that process, a university leader said Wednesday at a town hall meeting.

Interim Provost Carl Lejuez said the university would eliminate about 55 faculty positions and 100 staff positions in the next two school years.

On the faculty side, the reductions will happen through normal attrition and through a buyout program for older faculty. However, simply leaving vacancies unfilled won’t be enough on the staff side, Lejuez said — about 30 members of the university’s staff will be laid off. Those employees will be notified sometime in the spring or early summer of 2019, Lejuez said.

Once the positions are eliminated, the university’s faculty would be about 5.5 percent smaller, Lejuez said. He said the university planned to make up for those faculty losses through the use of nonfaculty lecturers.

“A lot of what you will see, and I hate that we have to ask people to do this so much, is (doing) more with less,” Lejuez said. “That’s a big piece of what has happened here.”

That sentiment didn’t sit well with the meeting’s attendees, some of whom brought up high administrative salaries and wondered whether administrators would be required to take pay cuts.

Lejuez said he understood it was not a popular answer, but the university must make sure its administrative pay remained competitive. Although he acknowledged he makes a high salary compared with faculty and staff, he said people in similar positions at peer universities make more than he does.

“I make considerably less than the previous provost,” he said, noting his $410,000 salary. “I’m happy to be here, I feel very lucky and I understand I make a very large salary. But each of these things has to be competitive or we will stop having good people.”

Lejuez also said he hoped that many of the positions that would be cut could be brought back within a few years once the university’s budget was more stable.

During the meeting, Lejuez also described a possible change to the budgeting process that he believes will better address priorities such as building maintenance and raises.

Under the current system, schools and departments at the university tally up how much money they have left over at the end of each fiscal year and allocate that money for raises and deferred maintenance, among other things. But Lejuez said he wanted to allow schools and departments to allocate funding to those things at the beginning of the fiscal year, if they so choose.

“It doesn’t give you more money, but it forces you to say no to other things,” he said. “Those are not going to be easy things to say no to either, but I get a pretty good sense from people who have shared with me that not having raises, increasing tuition and not fixing buildings is not acceptable.”

Additionally, Lejuez said, the new budgeting process would allow the university to better gauge how much money each department needed.

“Let’s say a college gets $100 million every year: Is that the right number?” he said. “We don’t know because we’ve never asked.”

Overall, Lejuez said he wanted to give the university more time to plan and be more thoughtful in how it allocated its money.

“We have to stop saying ‘This is how we’ve always done it,’ and we have to say ‘Based on the metrics that matter to us, are we allocating budget the right way?'” he said.

Lejuez said the university hoped to roll out a plan for a new budget process in the spring.