The job site of Hawker Apartments, 1011 Missouri St., lies dormant on Feb. 25, 2020, after the City of Lawrence revoked the contractor license of Lawrence developer Thomas Fritzel.

The City of Lawrence has revoked the contractor license of Lawrence developer Thomas Fritzel following his recent felony convictions and ordered all work to stop on his current project.

A red stop work order from the city’s building safety division was seen taped to a door at Hawker Apartments, 1011 Missouri St. The order calls for all work to stop on the project effective Tuesday, noting that a valid contractor license is required. No workers were on the site Tuesday afternoon.

In its decision to revoke the license, the city cited Fritzel’s recent convictions related to improper asbestos disposal during the renovation of the Alvamar Country Club. The revocation order states that the decision was being made pursuant to city code based on the serious nature of the actions underlying those convictions.

Assistant Planning Director Amy Miller said in an email to the Journal-World Tuesday that the revocation order, which she said was issued Monday morning, was effective immediately. She said the stop work order was subsequently placed at the Hawker Apartments, which she said was Fritzel’s only active project.

Miller said it was determined that revoking Fritzel’s contractor license was the appropriate action to take because Fritzel had committed a severe violation and that his felony convictions related to his work as a contractor. Under city code, the city has authority to revoke a contractor license in the case of a severe violation, a habitual violator or when the licensee is convicted of a crime or assessed an administrative penalty related to the licensee’s work as a contractor. 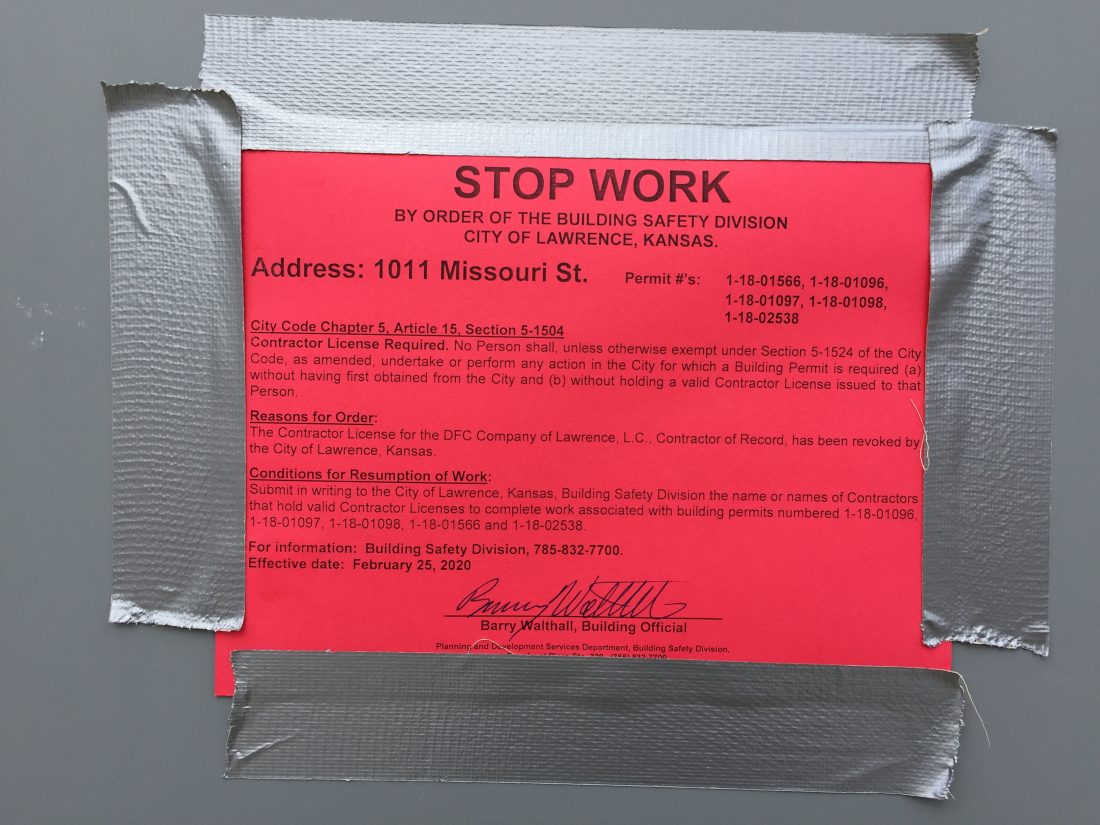 A stop work order is posted on a door at Hawker Apartments, 1011 Missouri St., on Feb. 25, 2020, after the City of Lawrence revoked the contractor license of Lawrence developer Thomas Fritzel the previous day.

Fritzel was found to have knowingly violated the federal Clean Air Act and federal regulations related to asbestos disposal at the former Alvamar Country Club, now known as the Jayhawk Club. On July 30, 2019, a jury took about two hours to find Fritzel guilty on three counts related to the disposal of material containing asbestos, a known carcinogen, during remodeling work at Alvamar in 2016. Fritzel was found guilty of knowingly failing to notify environmental agencies prior to removing asbestos material, knowingly failing to wet asbestos before removing it from the construction site and knowingly failing to dispose of asbestos waste in leak-tight containers.

The city initially did not disclose whether it was considering revoking Fritzel’s license, which the Journal-World reported Monday. Miller said Tuesday that the city started examining whether to revoke Fritzel’s license when he was convicted in July. She said that over the past two weeks, planning and development services and the city attorney’s office have been reviewing and processing a notice and order revoking the contractor licensing of DFC Company of Lawrence LC, whose principal is Fritzel.

Without its local license, DFC cannot do construction work that requires a permit within the Lawrence city limits. When a contractor’s license is revoked, the contractor is not eligible to apply for or be issued a contractor license for five years, according to the code. 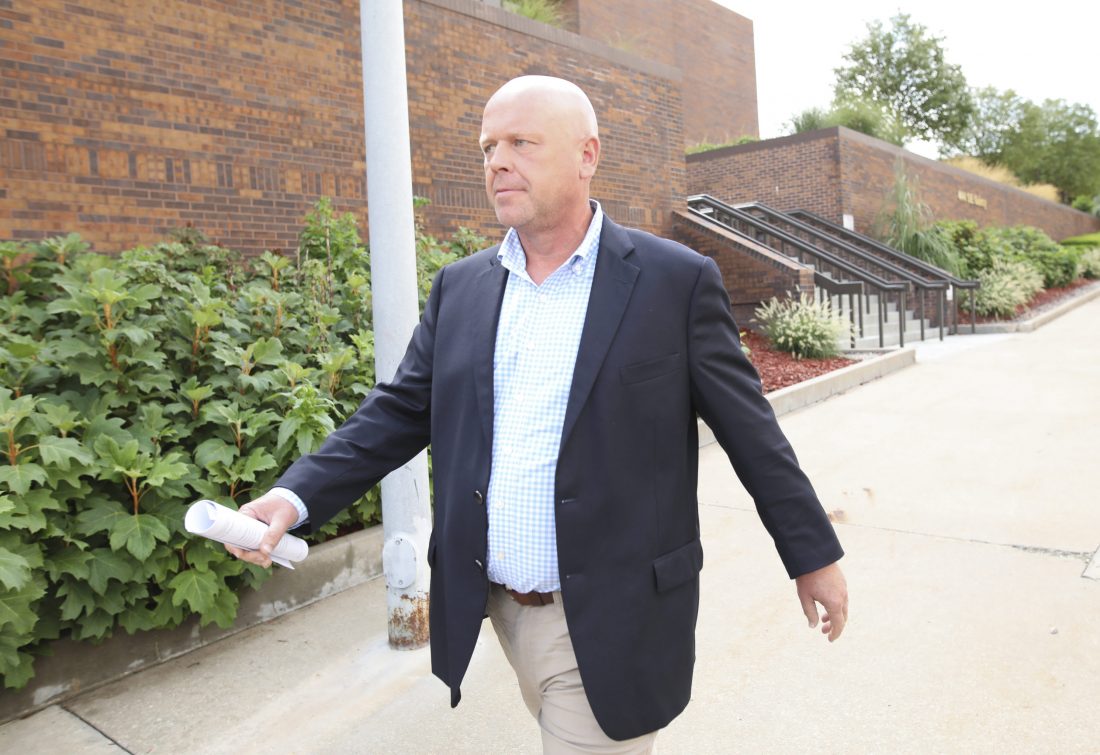 Fritzel did not immediately return a message Tuesday afternoon from the Journal-World asking if he had any response to the city revoking his license or whether he plans to file an appeal.

If an appeal is filed, the city’s Building Code Board of Appeals will consider the appeal as part of a public meeting. The revocation order states that the board’s decision can also be appealed, in which case the matter would be reviewed by Douglas County District Court.

The stop work order posted at Hawker Apartments states that in order to resume work that Fritzel must submit the name or names of a contractor with a valid contractor license to complete the work associated with Hawker’s building permits.

Fritzel was sentenced for the asbestos violations last week. On Thursday, Judge Holly Teeter sentenced Fritzel to three months in prison for each count, with the sentences to be served concurrently, and ordered him to pay a $55,000 fine. Teeter said she considered various factors when deciding the sentence, which was lower than the recommended 10-16 months, including an analysis conducted by a toxicologist at Fritzel’s request that indicated the asbestos exposure posed little risk. At the request of Fritzel’s defense attorney, Teeter agreed to suspend Fritzel’s prison sentence until after the sentencing date in a separate felony fraud case against Fritzel.

In that case, related to the development of The Oread hotel, Fritzel was indicted on charges of scheming to collect more than $400,000 in fraudulent tax refunds from the City of Lawrence. That case was tentatively set to go to trial last month, but Fritzel pleaded guilty to the charges on Jan. 9. As part of the plea agreement, both parties agreed to recommend a sentence of 12 months and a day in federal prison and a fine of up to $250,000. Sentencing in that case is scheduled for May 4.

● July 26, 2019 — Witnesses say truckloads of debris were removed from Alvamar site after potential for asbestos was known

● July 25, 2019 — Witnesses say they tried to inform Lawrence developer Thomas Fritzel and others about asbestos ahead of demolition

● May 10, 2017 — Judge officially dismisses city’s lawsuit against The Oread in wake of settlement

● March 6, 2017 — After 10 hours of mediation and executive session, no public update in city’s lawsuit against The Oread hotel

● Jan. 6, 2016 — City mum on action against Oread Inn, waiting on last deadline to comply with demands