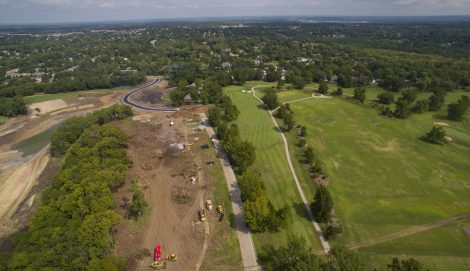 A swath of land that runs parallel with the driving range at Alvamar Golf Course and Country Club is cleared as part of its redevelopment into the Jayhawk Club in this file photo from August 2016.

TOPEKA — Receipts from the Hamm Landfill outside Lawrence indicate that the day after the state environmental agency told Lawrence developer Thomas Fritzel to cease all work on the Alvamar Country Club construction site and move no debris because of suspected asbestos, a company owned by Fritzel took five truckloads of debris to the landfill.

A series of Hamm Landfill scale tickets for R&R Supply Company, a company owned by Fritzel, were presented at a federal trial Friday in U.S. District Court in Topeka. Fritzel is charged with illegally disposing of asbestos-containing material during a 2016 remodeling of the Alvamar Country Club in west Lawrence, now known as the Jayhawk Club.

The federal indictment alleges that to save money Fritzel knowingly violated federal laws for safely handling asbestos, a substance that has been linked to cancer. Fritzel’s defense attorney has said Fritzel was not originally aware that there was asbestos at Alvamar and that he took appropriate steps to dispose of the asbestos once Kansas Department of Health and Environment samples indicated the dangerous substance was present.

During Friday’s proceedings, federal prosecutor Richard Hathaway called on Hamm Landfill worker Angela Higgins to testify regarding the receipts, which were displayed in court. The receipts indicated that between Oct. 14 and Oct. 26, 2016, the two weeks directly following a visit to the Alvamar construction site from KDHE employees, R&R dropped off a total of 16 truckloads of debris. According to the receipts, the biggest delivery, consisting of five loads, was dropped off the day after KDHE employees visited the site and informed Fritzel of suspected asbestos in the Alvamar clubhouse roof. Part of the roof was in the process of being demolished, and the employees say they instructed Fritzel that all work on the site needed to cease and that nothing should be moved.

KDHE employee Philip Schlaman testified Thursday that neither Fritzel nor any member of his organization prepared a KDHE demolition notification form, which he said must be submitted even if it is not clear asbestos is present. After receiving a tip that a demolition had begun at Alvamar and that the clubhouse roof had previously tested positive for asbestos, Schlaman said he and his co-worker Christina Gustafson visited the clubhouse site on Oct. 13, 2016, and took a sample of the material. Schlaman said that the following week the sample was found to have a certain kind of asbestos that is highly regulated because it can become airborne. However, Edward Novak, Fritzel’s attorney, previously called the timeline of events into question, as there were some discrepancies of dates on KDHE paperwork related to the event.

Novak did not cross-examine Higgins during Friday’s proceedings. Prior to Higgins’ testimony, Hathaway called Hamm Waste Services Vice President Charles Sedlock to testify. In response to questions from Hathaway, Sedlock said that though Hamm accepts asbestos materials, those materials must be identified so that they can be covered properly and the debris’ location more precisely tracked so that no methane gas extraction wells are drilled in that area. Sedlock said that the cost of asbestos disposal was approximately double that of regular debris.

Following the visit from KDHE, witnesses testified that Fritzel did contract with an asbestos abatement company, B&R Insulation, to remediate debris on the Alvamar site that contained asbestos. Hathaway called B&R Insulation foreman Max Cowley to testify Friday. Cowley corroborated statements made Thursday by B&R owner Richard Hall that a large pile of debris that Schlaman and a co-worker said they found on the site Oct. 13, photographs of which were shown in court, was not present when his crew arrived on the site several days later. Cowley said B&R cleaned up asbestos-containing debris from the Alvamar site on Oct. 27, 28 and 31, and that all that debris was ultimately taken to a landfill in Johnson County.

During cross-examination, Novak also pulled up the photo of the debris pile. He asked Cowley whether it was correct that it’s not possible for him to say what was in the debris pile since he didn’t see it, and Cowley responded that was correct. Novak also asked Cowley whether he ever talked to Fritzel, and Cowley responded that he had not. In response to Novak, Cowley said it was Hall who told him that the asbestos-containing material that needed to be picked up was a felt roofing paper.

As part of Friday’s proceedings, Hathaway also called Asbestos Consulting and Testing lab inspector Adrian Turner and ACT lab analyst Tami Van to testify. Both discussed reports and testing related to Alvamar, where various samples were taken and some materials on the site were found to contain asbestos while others were not. Schlaman said Thursday that Fritzel sent him a report for a sample his company submitted for testing that came back negative for asbestos, but said he told Fritzel at the time that the sample was a different material than the KDHE sample that ultimately tested positive.

Though Hathaway has asked Sedlock and other witnesses about the costs of remediating asbestos, Fritzel’s defense has previously called a financial motivation into question. In his opening statements Wednesday, Novak said because the purchase agreement for Alvamar included an indemnification, Fritzel was reimbursed for the asbestos remediation costs.

Hathaway rested his case Friday afternoon, and the trial is scheduled to continue Monday, when Fritzel’s attorneys will call their witnesses.