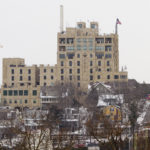 The final deadline for Oread Inn LC to comply with the city’s demands in a $500,000 tax dispute passed Monday with more contention, and city officials are remaining silent about their next move.

And while the dispute continues, a potential discrepancy has been found in the information the development group has provided to the city.

Two companies listed by the state as having registered offices at The Oread hotel — Warren LC and Oread Construction LC — are absent from a list of tenants given to the city in October from an attorney representing Oread Inn. Thomas Fritzel, the Lawrence businessman at the heart of the tax dispute with City Hall, is listed as an executive with both firms.

Stoddard said the list is sent annually and meant to show tenants of the hotel that have leases with Oread Inn. A business might not be listed, she said, if there’s a resident of the hotel who also operates a business there. If there are businesses not on the list, the city surmises those businesses are not tenants, she said.

“I presume it could be possible that someone may have a professional business name and live there; there could be those circumstances,” Stoddard said. “The major concern is for us to capture the tenants.”

A call to one of Oread Inn’s attorneys Friday was unreturned as of press time.

The city has spent months gathering information about The Oread hotel project after allegations came to light that a firm led by Fritzel, Oread Wholesale LC, was used to inflate sales tax totals at 1200 Oread Ave., the site of The Oread hotel. The hotel is part of a special taxing district where a large percentage of local sales tax dollars collected at the property are rebated back to the hotel development group, which is led by Fritzel.

Among the concerns raised in a city-ordered audit was that Oread Wholesale was listed as having an address at the hotel, even though there appeared to be no signs that the construction wholesale company actually operated there. Now, state records indicate there are two other companies — one a construction firm and the other a mechanical contractor — that don’t appear to have a presence at the hotel, either.

The Kansas Business Center, managed by the Secretary of State’s Office, lists Warren LC and Oread Construction LC as having registered offices at 1200 Oread Ave.

Neither Oread Construction LC nor Warren LC is present on a list of the hotel’s current tenants that was sent to the city from an attorney representing Oread Inn. A list of tenants is sent from the development group by Nov. 1 each year as an obligation of its redevelopment agreement with the city that created the special taxing district, Stoddard said.

Fritzel also signed annual reports as a manager of Warren LC, and his wife, Dru Fritzel, is listed as the only member who owns 5 percent or more of that company’s capital. According to the state, the registered agent for Warren LC, previously named Earnie’s LC, is Earnest Oshel.

Oshel is listed on city documents as the primary contact for Earnie’s Mechanical, which was hired by Gene Fritzel Construction Co. as the mechanical subcontractor for Rock Chalk Park.

In an application for payment for the Rock Chalk Park project, Earnie’s Mechanical’s listed address was a home at 1100 Delaware St. A storefront bearing the company’s name is located off Vermont Street across from the Lawrence Public Library.

When called Friday at the number on the storefront’s sign, Oshel declined to comment about whether he was the registered agent of Warren LC and whether the company had an office at The Oread. He repeated “no comment” when asked why Warren LC was not present on a document sent to the city listing the hotel’s tenants.

The redevelopment agreement with Oread Inn requires the development group to provide monthly sales tax returns from “assignees, purchasers, tenants, subtenants or any other entity acquiring property or occupancy rights” in the special tax district. When asked whether the city was confident it was getting all of the sales tax returns, Stoddard said, “as far as we are aware.”

A back-and-forth between Oread Inn and the city started in December, when a city-hired auditor concluded the group used Oread Wholesale in order to “improperly” receive approximately $430,000 in reimbursements from the city.

The auditor’s final report accused Oread Inn of violating Kansas law, but the Kansas Department of Revenue told city officials that it was a city issue.

In response, an attorney for Oread Inn called the audit “one-sided,” “inflammatory” and “inaccurate,” and contended the city violated Kansas law by using money from a tax increment financing fund to pay for the city’s audit of Oread Wholesale.

The attorney, Roger Walter, said in a letter sent Monday that Oread Inn was working on a more in-depth response to the audit. He estimated it would be done by the end of the month.

Attorneys for both Oread Inn and Oread Wholesale have said the city lacks authority under the redevelopment agreement to make the demands it has.

The group did comply with one in a list of city demands: repaying nearly $500,000 in “improperly” received sales tax rebates, plus interest. But, in a letter accompanying the check, the group said it was sending it “under protest.”

It hasn’t complied with other demands, including that it hand over financial documents Oread Wholesale used to complete its sales tax returns. Oread Inn has also protested a demand to agree to an addition to the redevelopment agreement that would allow the city to audit any sales tax records of Oread Inn, its tenants or anyone doing business with The Oread hotel without advance notice.

The city has so far stood by its demands.

Stoddard said Thursday that, though the city has been transparent about the dispute up to this point, she wouldn’t comment on its next step.

“We really have been making it a priority to be as transparent and up front with everyone as we can, but I hope everyone realizes that it’s also sensitive,” Stoddard said.

When asked when the public would know of what the city’s actions would be, Stoddard said it “depends on what things may unfold.”

“We certainly don’t want to jeopardize our ability to appropriately handle this,” Stoddard said.