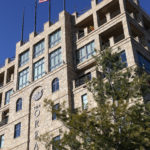 It could be several more weeks before an auditing firm hired by the city of Lawrence has additional findings on how a special taxing district at 1200 Oread Ave. was used by developers of The Oread hotel.

Auditors with Wichita-based Allen, Gibbs & Houlik are analyzing financial documents handed over by developers last month — an undertaking that City Manager Tom Markus is hoping will be complete in the next few weeks, he said Wednesday.

Oread Inn, the group behind The Oread hotel, gave auditors tax records from Oread Wholesale and other documents used to prepare Oread Wholesale’s original sales tax returns. The city has sought the documents since December in an effort to verify numbers related to the special taxing district.

For now, the city is keeping its options open regarding its agreement with Oread Inn that established the tax increment financing district in 2008.

“The commission has not determined what direction it’s going to take on it until there’s been a complete review of the information and the commission has had a chance to absorb that, understand that and discuss that,” Markus said. “There won’t be a decision made until that happens.”

In mid-March, developers agreed to comply with some of the city’s demands, including reimbursing the city for the cost of hiring the auditing firm to look into the special taxing district and amending their agreement with the city to allow it to audit any tenant of the special taxing district without notice. At that time, developers delivered Oread Wholesale’s sales tax information.

Oread Wholesale — owned by Lawrence businessman Thomas Fritzel, who also leads Oread Inn — is a tenant of the special taxing district and the company at the center of a $500,000 tax dispute between the city and Oread Inn.

According to a document previously provided by Oread Wholesale’s attorneys, the company amended last spring its sales tax returns from January 2012 through March 2015, excluding approximately $4.5 million — approximately half of its $8.9 million in total sales.

The amendments were made, according to information provided by attorneys, after city officials told Oread Inn that some sales reported in the district were incorrect. Oread Inn contacted the Kansas Department of Revenue to discuss how it was reporting sales, and Oread Wholesale made the changes based on a letter back from KDOR about sourcing rules.

The documents provided to the city last month should provide information about the amendments.

Fritzel drafted a letter two weeks ago addressed to the Lawrence community, reiterating statements attorneys have made about Oread Inn’s right to approximately $11 million for public improvements it made during construction of The Oread hotel. Fritzel also touched on his family’s longtime history of development in Lawrence and said the Oread groups would continue to work with the city.

“Oread Inn and Oread Wholesale have made every attempt to cooperate and resolve our apparent differences with the city of Lawrence in hopes of reaching an amicable resolution and avoiding litigation,” Fritzel wrote.

The letter, dated March 24, was sent to “many members” of Lawrence’s civic and business community, Fritzel’s attorney said. It was shared with the Journal-World on Tuesday.