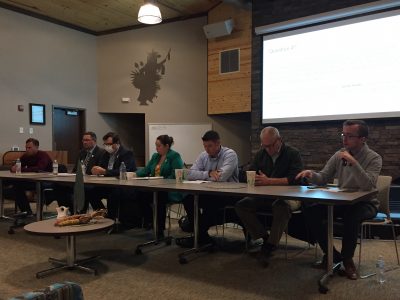 Lawrence City Commission candidates participate in a forum at the Haskell LIGHT Campus Ministry on Oct. 30, 2019. Joseph Shelton spoke for Ken Easthouse, who lost his voice due to an illness and wrote out his responses.

At a forum focusing on the indigenous community, Lawrence City Commission candidates shared what they would do to encourage indigenous businesses in Lawrence, among other issues.

Lead Horse LLC, a consulting agency, hosted the forum and it was moderated by Lead Horse CEO and founder Freddy Gipp and Indigenous and American Indian Studies Professor Eric Anderson. The forum, which took place Wednesday evening at the Haskell LIGHT Campus Ministry, had a special focus on developing the indigenous community in Lawrence.

Gipp and Anderson asked the candidates four questions and each candidate had two minutes to respond. Candidates also took questions from the audience following the structure portion of the forum. Gipp asked candidates how the city could encourage tribal governments and their economic enterprises and other indigenous owned and operated businesses to locate in Lawrence VenturePark and across the city.

Stuart Boley said the city helps fund the Lawrence chamber of commerce, which provides the city economic development services and does outreach to businesses. Boley said that the city should communicate to the chamber that it has an interest in getting projects with indigenous companies and peoples.

Rob Sands said he thinks the first thing a city commissioner can do is honest outreach, including taking the necessary steps to build relationships if the city wants to address a specific group of business owners. Sands also said the city could work to strengthen the relationship between Haskell Indian Nations University and Peaslee Tech.

Courtney Shipley said the city has probably dropped the ball in terms of communicating with Haskell Indian Nations University, and that she agreed that those relationships could be developed a lot better. Shipley also said speaking with the chamber would be a good way to move forward with those goals and that the city should also reach out to tribal business development centers.

Ken Easthouse said if any indigenous businesses want to participate in the city’s Catalyst Program, which provides incentives to businesses that want to locate in VenturePark, that they should absolutely come to City Hall to work with the city. He said he’d be interested to see those plans and to see if the city could make it work.

Brad Finkeldei said every city is competing with other communities when trying to bring in new businesses, and that the city’s indigenous community is a strength the city has not capitalized on in those efforts. He agreed that the city should talk with the chamber about that. He also noted he was on the Planning Commission when the Delaware Tribe proposed a project for north of Lawrence and he thinks the process needs to go better next time.

Joey Hentzler said he wants to focus on investing in families and workers. He said one way to do that is for the city to help create a public bank, which would finance loans and ensure that everyone has equal access to credit. He said having access to financing was important whether someone was buying a home or starting a business.

Anderson said that Haskell provides over $20 million in economic impact to Lawrence. He asked the candidates how they think the city can contribute to the growth and development of Haskell and how the candidates would improve partnerships and initiatives between the city government and Haskell.

Most all the candidates reiterated that the relationships between the city and Haskell needed to be stronger and that there should be more communication between city and university leaders. Sands said that those relationships should start by developing goals and metrics and that the city could engage more with decision-makers at the state and federal levels when it comes to Haskell.

Shipley agreed that more city support for Haskell could be expressed to federal and state representatives but that the city also needs to bring more people into local politics, which she said isn’t as accessible as it should be. She also said the city should consider how it distributes local grants, such as the Transient Guest Tax grant, which support local events.

Finkeldei said the city should increase its local lobbying efforts on the federal level for Haskell, including the need to address deferred maintenance and provide the school what it needs to grow. Boley agreed there could be things the city could do to educate federal legislators on Haskell issues and let them know that the city shares Haskell’s interests.

Hentzler said he thinks the city should have a quota system for its advisory boards to ensure that voices of the indigenous community are included in all conversations, whether it’s sustainability, transportation or incentives. He also said the city needs to create a racial disparity impact note, which would determine how projects and policies affect people of color.