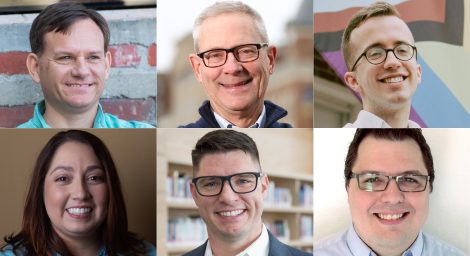 photo by: Contributed and file photos

The candidates for the 2019 Lawrence City Commission election are, from top left, Brad Finkeldei, Stuart Boley and Joey Hentzler, and from bottom left, Courtney Shipley, Rob Sands and Ken Easthouse.

Lawrence City Commission candidate Brad Finkeldei leads the pack by a wide margin this campaign fundraising period with more than $13,000 in contributions, doubling the amount raised by his closest contender.

Candidates were required to turn in receipt and expenditure reports on Monday that list contributions to their campaigns from July 26 to Oct. 24. Behind Finkeldei is fellow newcomer Rob Sands, who raised more than $6,000 this fundraising period. In third is Joey Hentzler, who has raised about $5,000.

As part of the report, candidates must indicate how much money they have received in contributions and list the names and occupations for people who contributed more than $150 this fundraising period.

How much each of the six candidates raised and any significant contributions are summarized below. The entirety of the candidates’ receipt and expenditure reports are available on the Douglas County website, douglascountyks.org.

Stuart Boley: The only incumbent candidate, Boley, a retired auditor, is seeking his second term on the City Commission. Boley has raised $2,381 this fundraising period and $10,816 total, including a $1,000 contribution from himself last fundraising period.

Courtney Shipley: Neighborhood leader and community board member Shipley is making her first run for the commission and has raised $3,728 this fundraising period and $5,693 total, including a $500 contribution from herself and a $500 loan from herself last fundraising period. The Kansas Realtors PAC contributed $300, and the Teamsters Local 696, a labor union, contributed $250.

The seats of Commissioners Boley, Leslie Soden and Herbert are up for reelection this year, and neither Soden nor Herbert is seeking reelection. The general election is Tuesday, Nov. 5.